Stories Of Hope And Wonder: For The NHS

As the country moves into another week of lockdown, the pressure on our frontline workers (across all areas) is all-encompassing so when Ian Whates (a fine friend, who not only runs the writing group I belong to - the NSFWG - but also the excellent NewCon Press) asked me if I'd like to contribute to an ebook charity anthology he'd planned, I didn't hesitate.  This was last Thursday and the anthology is here, a 695 page collection of 53 short stories from some of the best names in sci-fi, fantasy and horror writing today. 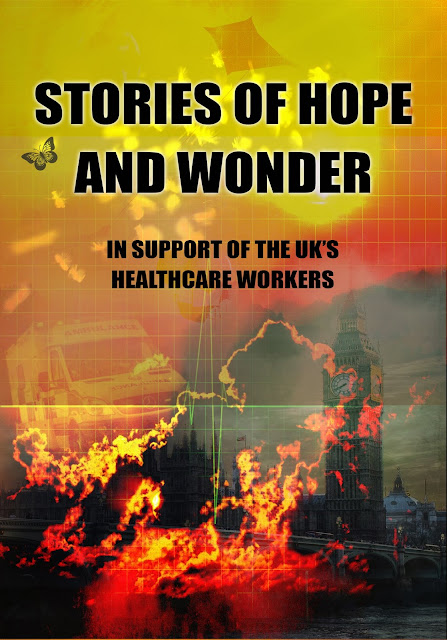 As the anthology is digital and the writers have contributed their stories freely, every penny NewCon Press receives will go straight to the NHS.

All politics aside, our wonderful NHS is clearly straining at the seams at the moment.  I have three dear friends working at the frontline (my best friend of 44 years - Nick Duncan - is a fireman who's also now volunteering with the NHS) and the Roberts, David & Julia, who are nurses.  David, who helps me plot the thriller novels as we go for 8 or 9 mile walks weekly with his dog Pippa, is currently recovering from Covid-related symptoms (though hasn't been tested) and it's been frightening to see how hard it's hit him, my friend who's fit and healthy and got me into Park Running.
We're in unprecendented times and people are doing what they can - rainbows and toys in windows, making PPE, helping friends and neighbours - and most of it restores your faith in the wonder of human nature, giving us all a chance to help.

On the subject of that, I'll take a moment to point you towards the Just Giving campaign for Captain Tom Moore, the 99 year old war veteran who aimed to raise £1,000 by walking 100 laps of his garden and achieved that on Thursday 16th April.  As I write this, he's managed to raise over £26m for the NHS.

* * *
My contribution, What We Do Sometimes, Without Thinking, was written in 2010 and came about directly because of Ian.  I'd just joined the writing group and he told me NewCon was planning to put together an anthology so, if I wanted to contribute, I needed to get a story to him within a week.  And I managed it.

Even better, the story was good enough he accepted it which led me to attending the launch party where Alan Moore (a rather famous writer and Northampton resident), who'd written the introduction, was in attendance.  I remember thanking him for his kind words and he shook my hand heartily and said "keep it local, boy!".

The story features fictionalised versions of me and Nick and an actual location, the bridge at the end of the Headlands in Kettering, from where Dude & I did used to go train chasing (I wrote about it here).  I like the story a lot and I'm proud to be included.