As regular readers of this blog will know, I'm a big fan of behind-the-scenes stuff to do with movies and matte paintings are one of my favourites (you can find my other posts on this link).  Still used today (though they're almost completely digital now), matte paintings were created on large sheets of glass, usually in oils or pasels, in order to integrate live-action footage (actors, backgrounds, etc) into an environment that would be too expensive or dangerous to build, film on or visit.

Back in October 2013, I wrote a blog about the matte paintings used in "Return Of The Jedi" (to coincide with the 30th anniversary) and it seemed to go down well.

When I realised how long it had been since that post, I thought it was about time I took a look at other fantastic matte paintings used in the original trilogy.  Hopefully you'll find some surprises in this selection...

Star Wars (1977)
Directed by George Lucas
Harrison Ellenshaw supervised the Matte Dept. but was moonlighting from Disney so didn't take a credit 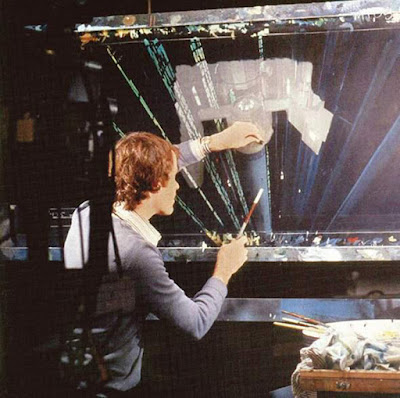 Harrison Ellenshaw (born 20th July 1945 in Harrisburg, Pennsylvania) followed his British-born father Peter (also Harrison's birth name) into the film business, starting his career at Walt Disney Studios.  Moonlighting from there, he supervised and painted on "Star Wars" (1977), joining ILM for "The Empire Strikes Back" (1980). He also worked on "The Black Hole" (1979) - for which both he and his father were nominated for an Academy Award - "Tron" (1982) and "Dick Tracy" (1990) amongst many others.  Ellenshaw is now a fine art painter. 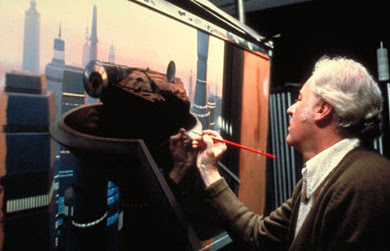 Ralph Angus McQuarrie (13th June 1929 - 3rd March 2012, born in Gary, Indiana) served in the US Army during the Korean War (where he survived a shot to the head).  Upon returning to the US, he studied at the Art Center School in California, working for a dentistry firm, before becoming a technical illustrator for Boeing where he helped animate CBS News's coverage of the Apollo space program.  After producing some illustrations for Hal Barwood and Matthew Robbins, they suggested him to their friend George Lucas, who was starting work on his film "The Star Wars" and wanted some production paintings to help sell his complicated script.  McQuarrie said later, "I just did my best to depict what I thought the film should look like, I really liked the idea. I didn't think the film would ever get made. My impression was it was too expensive. There wouldn't be enough of an audience. It's just too complicated. But George knew a lot of things that I didn't know."

Amongst many others, McQuarrie designed Darth Vader, Chewbacca, C3P0 and R2-D2 and drew concepts of the films sets and ships.  He went on to work as the conceptual designer for both "The Empire Strikes Back" and "Return of the Jedi" and also played (uncredited) an Echo Base General in "Empire".

He was offered the designer role for the Star Wars prequel trilogy but felt he had "run out of steam" and retired.  Even so, his original designs and unused concept art are still influencing the saga, both with the animated TV shows and also with "The Force Awakens".

McQuarrie died in his Berkeley, California home from complications of Parkinson's disease and is survived by his wife Joan.  Following his passing, George Lucas said, "His genial contribution, in the form of unequalled production paintings, propelled and inspired all of the cast and crew of the original "Star Wars" trilogy. When words could not convey my ideas, I could always point to one of Ralph's fabulous illustrations and say, 'do it like this'."

Details of the Return Of The Jedi team can be found at my blog post here.  There will be an Appreciation of Ralph McQuarrie post later in the year.
Posted by Mark West at 09:00:00