The Thirteenth Annual Westies - review of the year 2021 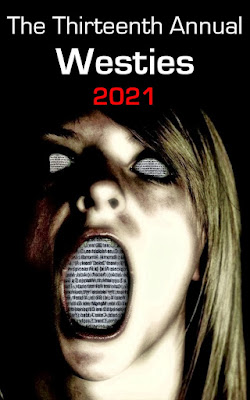 Well, after another odd year, here we are again, gearing up for Christmas and so it's time to indulge in the annual blog custom and remember the good books of 2021.
Once again, it's been a great reading year for me (in fact, I've read more books this year than I have since I began my spreadsheet in 2002) with a nice mixture of brand new novels, a few books that have languished on my TBR pile for too long, some good second-hand finds (which jumped straight to the top of the pile) along with some welcome re-reads.
As always, the top 20 places were hard fought and, I think, show a nice variety in genre and tone - if I've blogged about a book before, I've linked to it on the list.
Without further ado, I present the Thirteenth Annual Westies Award - “My Best Fiction Reads Of The Year” - and the top 20 looks like this:


1:   The Year Of The Ladybird, by Graham Joyce
2:   Season Of Mist, by Paul Finch
3:   Valley Of Lights, by Stephen Gallagher
4:   The Saturday Night Ghost Club, by Craig Davidson
5:   Under The Mistletoe (Christmas Now & Then), by Sue Moorcroft
6:   Summer At The French Park Café, by Sue Moorcroft *
7:   Clown In A Cornfield, by Adam Cesare
8:   Of Men And Monsters, by Tom Deady
9:   Don't Turn Around, by Jessica Barry
10: Blow Out, by Neal Williams
11: Reckless, by R J McBrien
12: Skin For Skin, by Terry Grimwood
13: The Flight, by Julie Clark
14: Driftnet, by Lin Anderson
15: The Other Passenger, by Louise Candlish
16: Murder Most Unladylike, by Robin Stevens
17: The A-Team, by Charles Heath
18: Later, by Stephen King
19: Raiders Of The Lost Ark, by Campbell Black
20: The Cottingley Cuckoo, by AJ Elwood
* This will be published in the summer of 2022, I read it to critique
The Top 10 in non-fiction are:
1=: Leonard: My Fifty-Year Friendship With A Remarkable Man, by William Shatner
1=: Days & Ages, by Mark Beaumont
3:  The Storyteller, by Dave Grohl
4:  The Bassoon King, by Rainn Wilson
5:  Paperbacks From Hell, by Grady Hendrix
6:  Lonely Boy, by Steve Jones
7:  In The Pleasure Groove, by John Taylor
8:  A Long Time Ago in a Cutting Room Far, Far Away, by Paul Hirsch
9:  Imperfect Hero: Harrison Ford, by Garry Jenkins
10: Star Wars Year By Year, by Lucy Dowling
Stats wise, I’ve read 91 books - 42 fiction, 21 non-fiction, 16 comics/nostalgia/kids and 12 Three Investigator mysteries.

Of the 79 books, the breakdown is thus:

"Christmas is coming!"
Welcome to the fifth post (you can find the others on these links, for 2017, 2018, 2019 and 2020) showcasing one of the Christmas highlights from when I was a kid (beyond the catalogues I wrote about in 2016), seeing which annual I got that particular year.  If you don't remember them, annuals were (and still are) large size hardback books, designed for children and based on existing properties, generally comics and popular TV shows, as well as the occasional film and sport and pop round-ups.

The ones based on comics featured the same cast as the weekly editions, while the TV and film ones had comic strips, the occasional short story, fact files and interviews and - brilliantly - in the case of The Fall Guy, behind the scenes information on stunts and how they were filmed.

Generally published towards the end of the year, annuals are cover-dated as the following year to ensure shops don't take them off the shelves immediately after the new year (though, by then, unsold copies are often heavily reduced).  Still as popular now, the only difference (apart from the fact kids today don't have the choice of comics we did) seems to be that they're skinnier (and that's not just me being all nostalgically misty about it - my ones from the late 70s and early 80s are substantially chunkier than the ones I bought for Dude when he was younger - he's 16 now and annuals don't feature on his wish list).
Here, then, is another selection of old favourites, ones I received and ones I remember my sister Tracy having.  I hope some of them inspire a warm, nostalgic trip down memory lane for you...

It's often said you were either a "Blue Peter kid" or a "Magpie kid" but I used to alternate between the two.  Which did you prefer?
I started watching this because of Captain Scarlet and didn't remember a great deal about it, to be honest, until I caught up with it on ForcesTV.  It hasn't aged well, it must be said, though the model work is superb.
Rupert The Bear makes his statutory appearance...
I was a big fan of The Professionals and still am, the shows holding up remarkably well (as do the novelisations, which I wrote about here).
The Six Million Dollar Man led me to the Bionic Woman, which I watched and enjoyed.  I don't think I've ever seen Max The Bionic Dog though (I wonder if he got his own annual...).
Probably the line-up I remember the most.
The series had long finished by the time this was published and I didn't realise it existed until I started researching these blog posts.  How could I have missed this, from my childhood hero (who I wrote about here)?
Spun off from the TV show (which I remember finding extremely funny), I wonder how much of the humour went sailing over my head?


scans from my collection, aside from the girls titles (thanks to the Internet for those)

You can read more of my nostalgia posts here
Posted by Mark West at 09:00:00 2 comments: