The Tenth Annual Westies - review of the year 2018 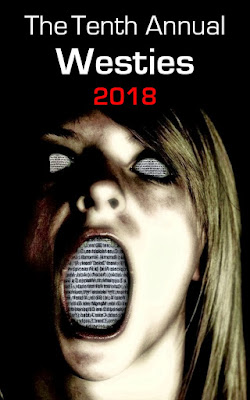 Well, here we are again (where does the time go, eh?), gearing up for Christmas and all things festive so that means it's time to indulge in the annual blog custom and remember the good books of 2018.

Once again, it's been a great reading year for me with a nice mixture of brand new novels (I was on the BFS Horror Novel Award jury again), a few books that have been languishing on my TBR pile for too long, some good second-hand finds (which jumped straight to the top of the pile) along with some welcome re-reads.

As always, the top 20 places were hard fought and, I think, show a nice variety in genre and tone - if I've blogged about a book before, I've linked to it on the list.

Without further ado, I present the Tenth Annual Westies Award - “My Best Fiction Reads Of The Year” - and the top 20 looks like this:


1: Pet Sematary, by Stephen King
2= Here And Gone, by Haylen Beck
2= Summer At The Seaside Village *, by Sue Moorcroft
4: The Changeling, by Victor LaValle
5: Cross Her Heart, by Sarah Pinborough
6: The House, by Simon Lelic
7: If You Go Down To The Woods, by Seth C. Adams
8: The Smallest Of Things, by Ian Whates
9: The River At Night, by Erica Ferencik
10: Hell Ship, by Ben Jones
11: The Last Temptation Of Dr Valentine, by John Llewellyn Probert
12: A Christmas Gift, by Sue Moorcroft
13: Relics, by Tim Lebbon
14: The Godwulf Manuscript, by Robert B. Parker
15: The Spy Who Loved Me, by Christopher Wood
16: You Were Gone, by Tim Weaver
17: The Woman In The Window, by A. J. Finn
18: The Cabin At The End Of The World, by Paul Tremblay
19: Looking For Rachel Wallace, by Robert B. Parker
20: The Chalk Man, by C. J. Tudor


* This is Sue's Avon book for next summer, which I read to critique and will be published in May 2019.

The Top 10 in non-fiction are:

1: Once A Saint, by Ian Ogilvy
2: Roger Moore: A Biography, by Roy Moseley
3: George Lucas: A Life, by Brian Jay Jones
4: Steven Spielberg: A Biography, by Joseph McBride
5: The Making Of Raiders Of The Lost Ark, by Derek Taylor
6: The Professionals Viewing Notes mk III, by Andrew Pixley
7: The Professionals Viewing Notes mk II, by Andrew Pixley
8: The Mighty One, by Steve MacManus
9: The Complete Spielberg, by Ian Freer
10: The Diary Of A Bookseller, by Shaun Bythell

Of the 74 books, the breakdown is thus: