Visions Of Ruin, a horror novella

After it was revealed in the latest NewCon Press newsletter, I'm proud to announce that they will be publishing my horror novella, Visions Of Ruin, early in 2022.
Having spent the last four years writing three mainstream thriller novels (which are now going to be published by The Book Folks, as I wrote about here), I've only dipped a toe back into horror when people have asked for short stories.  But the genre is in my blood and when Ian Whates asked if I'd like to write a novella for him, I jumped at the chance - I like and respect him a lot and I'm proud to be associated with NewCon Press.
Ian writes in the newsletter:
"I am delighted to welcome Mark West back to NewCon Press' publishing schedule. Mark's short fiction has appeared in several of our anthologies over the years, including Ten Tall Tales and Hauntings, but this time he contributes a longer piece, Visions of Ruin, which will be the 8th entry in our NP Novella series. I rate this as Mark's most accomplished work to date, and was bowled over by it on first reading."

I began work on the novella whilst my latest thriller - Jenny Was A Friend Of Mine - was out on submission and it was a real delight to go back to horror, working in the novella format which I think suits the genre so well.  The idea took a little while to come together but once I realised it was set in the 80s, featuring teenagers in a rainy seaside town, I was off and running, the writing process itself (which involved me drawing several maps of the caravan park central to the story) being hugely enjoyable.
Ian, from the newsletter:
"A week in a caravan at 'The Good Times Holiday Park' at the edge of a rundown seaside town is not exactly the holiday sixteen-year-old Sam has been dreaming of, but he knows his mum is struggling and doing the best she can. At least he meets someone his own age to hang out with – Polly – but neither of them are prepared for the strangeness that ensues. Full of deft touches that bring the 1980s setting to life and populated with a cast of fully rounded characters that the reader can immediately relate to, Visions of Ruin will be released in early 2022."
I will post more details when I'm able, but I have to say, I'm looking forward to seeing Sam and Polly ride their Surrey bike out into the world.
Find out more about NewCon Press here.
Thanks to Ian for both asking for and then enjoying the story enough to want to publish it, Nick Duncan for taking the picture all those years ago and for our adventures on the east coast in the 80s, Teika Marija Smits who helped push me to start and, as always, David Roberts for the Friday Night Walks and the mammoth plotting sessions.
Posted by Mark West at 09:00:00 4 comments:

The Mystery Of The Shrinking House, by William Arden

The Three Investigators followed the winding path.  All at once, a loud chilling scream echoed through the jungle vegetation.  It sounded again - directly in front of them!

A voice spoke sharply from behind them.

They whirled to see a big, bear-like man.  In his hand was a gleaming spear…

The boys are on a buying trip with Uncle Titus, visiting the home of Professor Carswell and his son Hal, who are looking to sell the few belongings of their recently deceased tenant, Joshua Cameron, who died owing them money.  Cameron was an artist and among his possessions are twenty paintings, all showing his cottage, though it changes size in each one (looked at in order, the cottage appears to shrink, hence the title).  Jupiter thinks he spots someone and the boys end up chasing the intruder through the canyon, though he escapes in a car.  After Uncle Titus has managed to sell all of Cameron’s goods (including the paintings), the boys are contacted by the Countess and her estate manager, Armand Marchal.  It seems she is Cameron’s much younger sister, though they’ve been estranged for a while and she’s keen to have something to remember her brother by.  On the trail of the missing paintings which may - or may not - lead to riches, the boys encounter DeGroot, a mysterious Dutch art dealer and have run ins with Skinny Norris, with more villains popping up as the hunt intensifies.

The fourth book in the series by William Arden (the pen name of thriller writer Dennis Lynds) after a break of two years (he wrote The Mystery Of The Moaning Cave (1968) whilst creator Robert Arthur was still alive, then continued the series with The Mystery Of The Laughing Shadow (1969) and The Secret Of The Crooked Cat (1970)), this is as tightly plotted and well paced as all his books.  Arden makes good use of the canyon and gully around the Carswell property, while Cameron’s cottage is cracking location for some nicely done ‘in peril’ sequences.  There’s also a cleverly constructed ‘locked room’ mystery mid-way through at the studio of artist Maxwell James (who supplies the leopard seen on the paperback art).  Headquarters is used sparingly although, following an uncharacteristic slip by Jupiter, the Junkyard hosts an amusing scene where it’s over-run with local kids trying to help as part of the Ghost-to-Ghost hook-up.

The central mystery - the story behind the paintings and how they might lead to treasure - is well handled, if occasionally dry but having said that, the logic of it works perfectly and it plays out nicely, with Jupe putting the clues together well (and Hitchcock matching him in the deductions later).  The boys all have a clear role to play, the supporting characters are well-rounded and serve a purpose and it’s always fun to have Uncle Titus involved.  The Hitchcock intro is odd though, with the master director suddenly having an attitude similar to the one he had on The Secret Of Terror Castle.

As well written as we’ve come to expect from William Arden, this has some smart set pieces and also what I hope are some nice little in-jokes.  I really want Professor Carswell to be a nod to Night Of The Demon while one of Cameron’s bric-a-brac items was sold to a Mrs Leary who lives on Rojas Street (Rojas was the main villain from The Mystery Of The Silver Spider).  A solid plot, a great sense of location and some nice interplay with the boys, this is an entertaining read that I’d very much recommend.

There were no internal illustrations for the UK edition, more's the pity - the US had some and I'd like to have seen Roger Hall's take on them.

Under The Mistletoe, by Sue Moorcroft

Regular blog readers will know I've been friends with Sue Moorcroft for a while, having met at the Kettering Writers Group in 1999 (the group leader was of a more literary bent, so we genre writers were consigned to the back of the room, where we had great fun).  Since then she's gone from strength to strength, hitting number one in the Kindle Bestseller charts (with The Christmas Promise), becoming a Sunday Times Best Seller and her novel, A Summer To Remember (which I wrote about here) won the Goldsboro Books Contemporary Romantic Novel Award 2020.  As well as featuring her a lot on blog (to see more, click this link), I'm also pleased to be one of her beta-readers and thoroughly enjoyed her latest novel, Under The Mistletoe, now available in paperback and as an e-book. 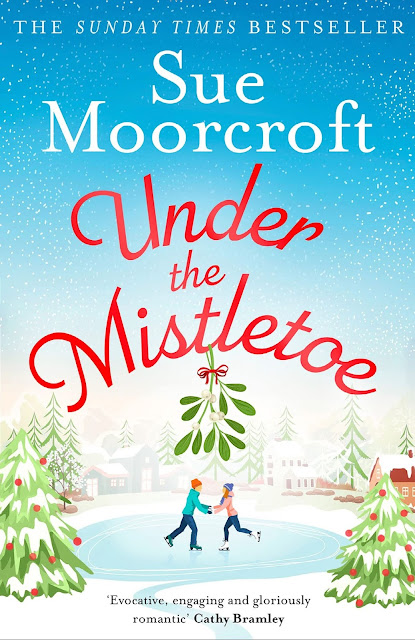