The Secret Of Terror Castle, by Robert Arthur 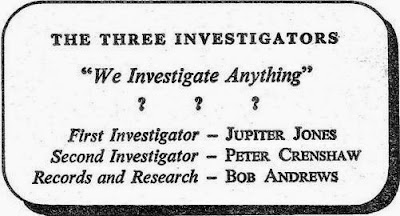 This is the Three Investigators' business card - and their first assignment is to investigate a haunted house for that Master Of Mystery, Alfred Hitchcock.  But Terror Castle, looming through the mists of Black Canyon, turns out to have more than its fair share of spooks...

When Jupiter Jones wins the use “of a Rolls-Royce sedan for thirty days of twenty-four hours each", he and his friends Pete Crenshaw and Bob Andrews decide to set up the investigation agency they’ve been discussing.  Jupiter even has their first case - finding a genuine haunted house for Alfred Hitchcock.  After tricking their way into his bungalow on the studio lot, Hitchcock agrees to introducing the case (“the promise was extorted from me by nothing less than sheer skulduggery”) and the boys begin to investigate Terror Castle, once the home of famed silent movie star Stephen Terrill.  Located in the narrow Black Canyon, above Hollywood, the boys soon discover that something definitely haunts Terror Castle and they must experience the Blue Phantom, the fog of fear and feelings of extreme terror to find out what it is.

This is the first Three Investigators book, created and written by Robert Arthur and does a fantastic job of setting the template that the rest of the books in the series would adhere to so successfully.  Hitchcock calls Jupiter Jones “insufferable” in the introduction and some of the rougher edges to his character would be smoothed down over the next couple of books but the repartee between him, Pete and Bob is pitch perfect.  Their conversation is smart and often humorous, the action scenes are well handled and only Bob comes out of it slightly short-changed, since he’s away working in the library for a lot of the time (though he & Pete explore the castle during daylight in a wonderfully tense sequence).

Terror Castle is a well-used and described location, spooky and gloomy and well captured in the boys various explorations of it and the natural formation of Black Canyon plays an important part in the plot.  Characterisation is brisk and thorough - Worthington is excellent - and Aunt Mathilda and Uncle Titus feature quite strongly at the start (Titus helps inform Jupiter of a clue) while Headquarters is lovingly described, though Rocky Beach barely earns a mention.  Stephen Terrill is a great creation - Lon Chaney must have been the inspiration for at least part of him - though, ironically, he’s maybe the only thing that particularly dates the book, since he was a silent movie star (the book was published in 1964, so the talkies were only 37 years old then which, to me as I write this, would be 1981).  His manager, Jonathan Rex - also known as ‘The Whisperer’ - is also a smart creation, menacing and helpful by turns while Skinny Norris makes his first appearance (though not for long) and Jupiter's thoughts about him are cleverly woven into the plot.

Whilst the series hinges on the relationship between the boys, their link to Hitchcock is also key.  Robert Arthur was the editor of the Alfred Hitchcock mystery anthologies and it’s clear he was having fun here, spoofing his friends demeanour - Hitchcock has a troublesome relationship with the investigators, which smoothes itself out as the book goes on and his presence adds gravitas to the story.

With some great set pieces, nicely spooky sequences and a few plot twists along the way, this is an excellent read and I highly recommend it.


The internal illustrations for the UK edition were drawn by Roger Hall.

Thanks to Ian Regan for the artwork (you can see more at his excellent Cover Art database here)
Posted by Mark West at 09:00:00