The Summer Of Impossible Things, by Rowan Coleman (a review)

In a new edition of the occasional series, I want to tell you about a book I've read and loved, which I think adds to the genre (sci-fi, contemporary, romantic, coming of age, it's all in here) and that I think you'll enjoy if you're a fan.  This was actually my favourite read (tied with Sarah Pinborough's Behind Her Eyes) of last year but I realised this past weekend I hadn't blogged about it.  So here we go... 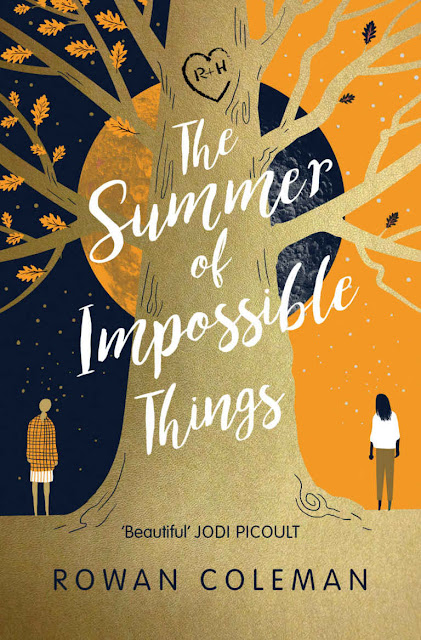 If you could change the past, would you?

Thirty years ago, something terrible happened to Luna’s mother. Something she’s only prepared to reveal after her death.

Now Luna and her sister have a chance to go back to their mother’s birthplace and settle her affairs. But in Brooklyn they find more questions than answers, until something impossible – magical – happens to Luna, and she meets her mother as a young woman back in the summer of 1977.

At first Luna’s thinks she’s going crazy, but if she can truly travel back in time, she can change things. But in doing anything – everything – to save her mother’s life, will she have to sacrifice her own?

Luna is a 29 year-old unlucky-in-love physicist, tormented by the recent suicide of her long-depressed mum Marissa, a Brooklyn native who left New York on the night of the 1977 black-out to move to England with Henry, a photographer who became her husband. After her death, Luna and her younger sister, the recovering addict Pia (affectionately known as Pea), discover some old films where Marissa confesses she was raped and that Henry isn’t Luna’s biological father. Understandably knocked for six by this news, Luna and Pea go to New York to settle Marissa’s affairs, namely the house she grew up in. Exploring it before putting it on sale, Luna discovers she can somehow slip from the present day (2007) back to 1977, where she meets her mother, then called Riss, as a fresh-faced 20 year old. Thinking she might be able to change the past - by preventing the terrible act on that night of the blackout, her mother might live a happier life - Luna spends more time in 1977, trying to track down her real father and prevent him attacking Marissa.

Luna is a superb character - strong and forceful, scared and angry and occasionally bewildered - and the novel is all the better for her presence. Although Pea and the other 2007 characters are also well described, it’s the young gang of friends Luna meets in 1977 - Riss, her sister Stephanie, friend Michelle and Michael, a boy who catches Luna’s eye and a bit more - that really burst into life. I don’t know what the Brooklyn of 1977 was like but it really feels like Coleman captures it here, the atmosphere and heat, the decay and laughter and love and New York envelops the novel, its streets and bakeries and discos becoming a strong and evocative backdrop.

With each time-travel experience, Luna notices little changes in 2007 which make her realise she can actually make a difference, though the resulting moral dilemma - if she makes enough of a change she will erase herself from existence - is won over by her love for her mother. These elements are well crafted, without too much explanation and treated as matter-of-fact, which I think is the best way to do it. The links between the years are explored cleverly (I loved what happened to a copy of The Shining Luna carries at one point), as are the relationships between the characters, particularly the burgeoning one between Luna and Michael, which I loved.

A wonderful novel, full of love and friendship and vitality, this doesn’t shy away from the darker elements of life though there is always hope and it’s told with an assured style that drags the reader through at breakneck pace. There are plenty of clever pop culture references and funny lines (Michael referring to his Farrah Fawcett Majors poster springs to mind), the anguish and grief is handled sensitively and, as the novel progresses and the outcome becomes clearer (though Coleman has a surprise or two up her sleeve), it becomes very moving, especially in the relationships between Riss and Luna and Luna and Michael.

Beautifully constructed, fantastic in every aspect, I loved this and highly recommend it.


Rowan Coleman can be found online here
Posted by Mark West at 09:00:00