A time-out from politics and news about writing, for something much closer to my heart - my little Dude. 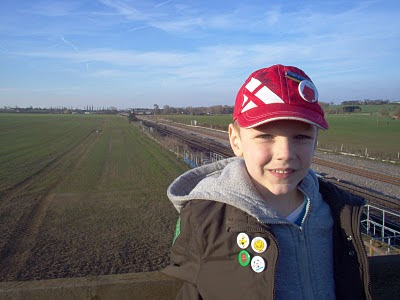 On Monday this week, Dude got his First Aid badge at Beavers (ring an ambulance, was his basic advice to me when I asked).

On Tuesday, he was moved up to being a Gold Reader, the only kid in his class to do so. It was difficult to say, when he was telling me, which of us was more chuffed!

Golden Wonder, Malcolm Wardle and why I'm pissed off!

I drove through Market Harborough today and, as usual, I looked up the street where the old Golden Wonder Head Office used to be located. Imagine my surprise when I noticed that the front part of the building, on the main road, was now a ladies clothes shop. The larger part was now a Travelodge. Seeing those two things, a clothes shop and a hotel chain, made my blood boil and now, three hours later as I write this, I’m still angry.

A bit of history. I left school in 1986 and went to work for Hunters Foods, a small-time crisp manufacturer based in . Due to our upper echelons having bigger ideas than funds, we found ourselves bought out in 1988 by Golden Wonder (then owned by Dalgety). As most Brits of a certain age will tell you, before Walkers grabbed a stranglehold on the marketplace, everyone knew Golden Wonder - it was a household name, a solid brand and my career was safe. I remained at Golden Wonder until 1997, when I left for a year to work elsewhere, though I returned in 1998 just after Alison & I got married. I continued to work for Golden Wonder through to January 2006 when, as my wife was gripped with post-natal depression and we moved house, I was made redundant.

At the time, there was no money left. For anything. I was paid my redundancy (10 years worth) by the government, which meant I had to sign on for the first time in my life (and, for those 10 years loyal service, I got about £3k). I was owed quite a lot of holiday money too but that “would be taken care of”. Suddenly, from being the site accountant, I was another statistic, a preferential creditor of a company that had no money and there was absolutely fuck all I could do about it. A liquidator was put in place - Kroll, at first, until they were bought out by Zolfo Cooper - but all of them looked me and my fellow preferential creditors in the eye and said they’d do our best for us. I believed them. I was an idiot.

Let’s back up slightly. Golden Wonder had been in trouble before, after Dalgety off-loaded us and we made the mistake of aiming for the own brand market (supermarkets and ‘named’ lines) when Walkers began their domination. We got involved with Tesco who, as the “nations favourite supermarket” squeeze the suppliers to be able to sell goods cheaply, rather than cut down on their margin - so yes, when you see those Buy One Get One Free (BOGOF) promotions, it’s not Tesco’s money that’s being given away, it’s the supplier who is already on the slimmest of margins. Anyway, Tesco and their friends squeezed and squeezed and Golden Wonder squealed and squealed but didn’t challenge Walkers (who, to be fair, had the might of Pepsi-Co behind them). It wasn’t long before our owners decided to off-load us and we were subject to a Management Buy-Out (MBO), led by our current MD - Clive Sharpe - and his merry team of fellow highwaymen (agh, sorry, directors) including our site manager Malcolm Wardle. Remember that name - Malcolm Wardle. Because I’m going to call him every name under the sun later on and I wouldn’t want you to forget which tax-exiled, company-arse-raping, two-faced twat I was referring too.

There were two MBO’s in the end, then they sold the company to Venture Capitalists, who sold to another set of Venture Capitalists, who decided to sell Wotsits (our prime brand) to Walkers (who buried it). In the meantime, the highway bandits (agh, sorry, directors involved in the MBO) all went into tax exile with their millions and my man, Malcolm Wardle, ended up in , living at the harbour in a wonderful apartment. I know this because he came back and took us to dinner, telling us about how it was actually quite lonely and that he hadn’t made too many millions out of it.

Anyway, we got sold out and the company was run into the ground and then I was made redundant. I was owed (not counting the loss of redundancy payments) about £530 in holiday money at the time and I went on my merry way, full of hope and faith in the human condition, that I’d get what I was owed.

I took two months out, became a house-husband, sorted the new place and enjoyed my time away. Then I started at the company I currently work at and I was very lucky, I landed on my feet. Others didn’t fare so well.

A little while after being at the new job, I heard rumblings on the old Golden Wonder grapevine that there might be a problem with the pension. Turned out, there was. Those fucking highway robbers (agh, who cares, that’s what they were) had decided, during the MBO period, not to pay into the pension fund. So it was being suspended. Bad news for me (20 years of contributions hanging in the balance), much worse for others (one ex-colleague, just turned 60, was told she couldn’t retire because she didn’t have a pension). How cool is that? How cool must somebody be, to be a tax exile in and then complain to the people whose pension he arse-raped that it’s quite a lonely life and he didn’t make millions out of it?

The pension issue, in the end, was kind-of sorted out. A consulting firm was brought in and we’ve been put into the Pension Protection Fund so we’ll get something out of it, even if it’s nowhere near what we should have had.

So why did the Travelodge in Market Harborough piss me off so much today?

In 2007, the liquidators sent me another piss-poor cheque (for about £11, if I remember correctly) and informed us - through a letter - that they had interest in the Head Office site. Last year, in August, I received the final settlement of my preferential claim with the company, a cheque for the princely sum of £5.46 which, by my reckoning, puts my final paid claim at about 20% of what I was owed. But here’s the funny thing.

In 2009, I received a letter to cover another cheque, when I was paid a whopping £38.01 - or 7.12p in the pound. Unsecured creditors got 9p in the pound. With the letter was a breakdown of Liquidator expenses. This shows that they charged an average (a fucking AVERAGE) of £155 per hour - the highest rate was £221, the lowest £134!

In total, to August 2009 (when I was owed a sum total of £533 and was getting 7.12p in the pound), the liquidators had charged £423,869 in time costs, plus £7,365 in expenses and disbursements. In that same letter - and I quote - “I am pleased to report that I have now received an unconditional cash offer of £750,000 for the Property [Head Office only]. This offer is in excess of the realisations that my agents estimated would be received from placing the Property in an auction”.

I swear to God, that’s what it says. Now I’ve dealt with estate agents before and if something’s worth £100, they’ll say it’s £150 so they can barter. If the liquidators agents seriously thought a prime piece of real estate in the centre of Market Harborough was only worth £750,000, what they hell were they on?

Edinburgh House was constructed in 1968, (it replaced the Goddard’s Cornmarket) and was occupied by Golden Wonder Crisps as its HQ. The building provided 36,942sq ft of office accommodation over 3 floors with a basement below providing 10,032 sq ft of accommodation for parking and ancillary uses for the offices.

So why am I getting so steamed about this? I think it’s because it’s the final insult. The final kick in the teeth, as I look at the cheque for £5.46 and reflect on the fact that a 60-unit hotel now occupies property sold for (probably less than) £750k and most of those fees were already gone.

But most of all, maybe this final insult is the one that makes me see that some people aren’t imbued of human kindness. In fact, some pitiful people - such as Malcolm Wardle -might not have a human emotion at all.

I know he probably won’t, but I really do hope that Malcolm Wardle reads this blog post - or that someone he knows does and points him in the right direction. I hope he reads it and knows of all those hundreds of people he helped shaft - we’re still going, you sad sack of shit. We’re still living our lives, with loving families and friends and we can all sleep at night. And I sincerely - oh how sincerely do I mean this? - I sincerely hope that you have nightmares for the rest of your life.
Posted by Mark West at 21:13:00 10 comments:

New interview/questionnaire (with yours truly)

Colin Leslie, the nice man behind the Black Abyss reviews site, has questioned me as part of an ongoing series he’s running. You can read it here - Mark West - The Inquisition.

Today would have been my sister Tracy’s 40th birthday. It’s 8 years (this year) since she passed away and I still miss her a lot. She was the world’s biggest Snoopy fan and, whilst I used to enjoy it before, I now use Peanuts as a way of keeping her memory alive. Matthew, obviously, never met her - though he knows all about her - and I’ve managed to pass on to him a love for Snoopy. The following is his favourite YouTube clip of the smart beagle and Woodstock and never fails to make him laugh.

So, as a happy 40th gift, from all of us, here’s Snoopy laughing at the dancing bunnies. 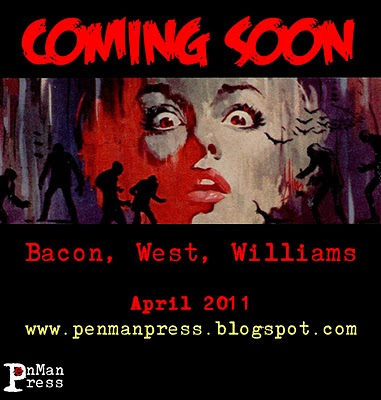 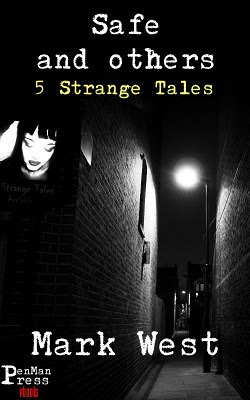 I am a big fan of books - I love reading them, I love the way they feel and smell - and one of my ambitions, as a writer, is to go into a bookshop, anywhere in the country and find my book on the shelf. So print has always been my preferred reading means and I’ve always viewed electronic publishing a bit warily.

However, Generation Next Publishing’s edition of ”Conjure” seems to be doing rather well and I’ve had some good feedback from readers who’ve taken the chance and downloaded it and with that in mind, I’ve decided to try a little experiment.

PenMan Press have just published my mini-collection ”Safe And Others” on Smashwords and it’ll hopefully be available on Kindle very soon. For the princely sum of £1 ($1.50), this contains 5 previously published stories (from the early 2000’s), only one of which was included in my “Strange Tales” collection.

“From the black comedy of "Giving Blood" to the very dark "Infantophobia", this collection showcases some of West's best early works.”

Why old stuff? Because I wanted to make sure that the stories presented had been through the editorial wringer and they have, all appearing in print magazines and also because I think I put out some good work back then.

So, why not give ”Safe And Others” a go? I can’t promise you anything, but I’d like to think you’ll have a good time with the stories in it.
Posted by Mark West at 17:58:00 No comments:

Just bought my convention ticket and booked the hotel room! Woo hoo!
Posted by Mark West at 12:24:00 No comments: