Of Videodromes and Sure Things

Starting from Saturday, Alison & I have held a bit of a filmfest which, as the days have gone on, has turned into an 80s blowout. This is the first film we watched: 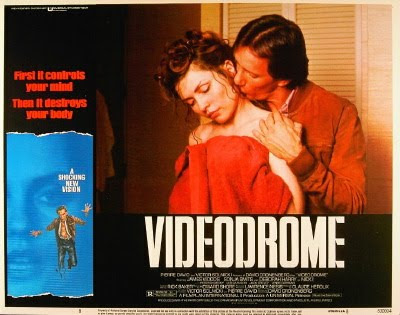 Videodrome
My choice - Alison can’t remember ever watching it before - and one of my favourite films of all time. I first saw it in the early 80s (it came out 82/83, so I’d guess 1984 or so), on VHS, at my friend Steven Corton’s house. He’d never heard of it, I loved Debbie Harry, thought Rick Baker was brilliant and had watched “Scanners” and thought David Cronenberg was second only to George Lucas. I have no idea if the copy we watched was cut (I imagine it was), but I do remember being absolutely blown away by the whole thing - the look, the feel, the imagery - it was fantastic. I’ve re-visited it more than a few times since, but this was the first occasion in a while. So, going back to view a 28 year old film, probably 26 years since I first saw it - what did I think? I thought it held up remarkably well, to be honest. James Woods was brilliant, thoroughly believable and very natural. Debbie Harry - I’m sorry to say - was a bit wooden at times but she certainly brought something extra to the part. The effects were excellent, for the most part, though to be fair they didn’t resist the temptation to dwell - Woods standing up with his arm in his chest suffered from a very fake-looking arm and the ‘spikes coming out of the handgun’ shot ran a bit too long. The direction and writing were spot on, as was the location work and it was a thoroughly engrossing piece of cinema. 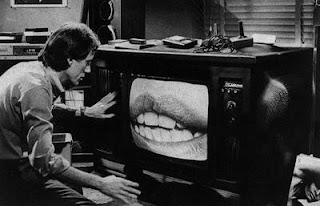 It was also nice to see how things have changed - the clunky TV, the Betamax tapes (used, apparently, because of make-up requirements to do with size), the cable stuff being a lot tamer than we now take for granted on the Net - and not always for the better.
(as an aside, apparently this is up for a remake. I have the awful idea that it’ll be hunky/sexy early 20-somethings in the leads, a director who cuts to make up for content and more CGI than you can shake a stick at. A remake I’ll be avoiding, methinks).
On Sunday, we watched “Angel Heart” - cracking film, dreadful transfer but as I’m currently reading “Falling Angel”, I’ll discuss this in another blogpost.

On Monday it was “Condorman”, from 1981. I got the paperback of this from the school bookworm club (I’d have been about 12) and loved it. I bugged Dad to take me to see it at the cinema and I remember really enjoying it (and waiting, avidly, for the sequel the end of the film appeared to promise). Watching it now, I can only assume my Dad was very politely quiet as we left the cinema. The transfer was dreadful, the acting was appalling, you could see the wires when Condorman flew and the blue-screen/rear projection work was terrible. If this had been a Cannon Films production from 1981 you might forgive it, but not Disney. On the upside, Remy Julienne’s stuntwork was very good. 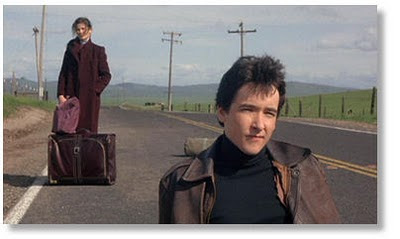 Last night, Alison fancied a comedy and so we watched “The Sure Thing”, another film I love dearly but don’t seem to watch too often. Expecting to have my fond memories shattered, we settled down and I discovered, to my great relief, that the film has lost none of its charm or sparkle. It’s funny, poignant, well acted, gripping and thoroughly enjoyable. Cusack - did he really ever look that young - was brilliant and Daphne Zuniga (who appears to have settled into a TV acting career) held her own well. Loved it.

So the best of the bunch was “Videodrome”, a low-budget tax shelter movie from Canada that nobody understood when it was released but which still, 28 years later, has the power to unsettle. And, brilliantly, it inspired a blog that takes in David Cronenberg and Rob Reiner, by way of Alan Parker. Now that’s an eclectic bunch of film-makers.
Posted by Mark West at 14:48:00