More reviews for "What Gets Left Behind"

The “What Gets Left Behind” chapbook is now in the hands of Simon Marshall-Jones and the first copies will go out to Spectral Press subscribers attending FantasyCon in Brighton this weekend.

Even better, some reviews have been filtering through and - thankfully - they’re hearteningly good! Following on from Jim’s one (at Ginger Nuts Of Horror), which I mentioned in my earlier post, three more have come through. I’ve listed them below, with key quotes extracted, but please do follow the links which all go to the original review site.

First up is Walt Hicks, over at the Hellbound Times (the review can be linked from here). Walt says, "West’s prose is lean and effective, and his build-up of suspense is excellent. He seamlessly transitions from past to present utilizing clever details that are incidental rather than intrusive; his sense of setting is keen, and his character interaction—particularly with fathers and sons—is dead-on target.”

Next up is Geoff Nelder, writing at Science42Fiction (the review is posted at the Spectral site in its entirety on this link) and he says "The story only lasts 27 pages but leaves you with a haunting, yet touching, legacy.”

Adam Millard, reviewing for This Is Horror (find the review at this link) says “What West manages to do in so few pages, some authors don’t achieve in an entire novel. What Gets Left Behind is a spine-tingling tale that will play on your mind for some time after you’ve put it down. A laconic gem.”

Both Walt and Adam also make note of my use of 1980’s touchstones (as did Jim) and it’s nice to see that appreciated too.

Adam writes “The 80s are referenced here to marvellous effect, with nods to Indiana Jones, Star Wars, and even Noel Edmonds. It was a time when children actually went outside to play, an epoch of innocence and grazed kneecaps, and West does a fantastic job of setting the scene.”
Posted by Mark West at 11:41:00 No comments:

Email ThisBlogThis!Share to TwitterShare to FacebookShare to Pinterest
Labels: ginger nuts of horror, review, spectral press, what gets left behind

1st review for "What Gets Left Behind"

Courtesy of Jim Mcleod, from the Ginger Nuts Of Horror website.

Click this link to go to the review on his site.

It's a great review and I'm really pleased with it, especially these two lines which I'll post here:

Mark West's writing has a heart and soul that many writers would kill for.

Stories where the protagonist goes back to his childhood home are ten a penny, What Gets Left Behind, is a £100 note in a pocket of small change.
Posted by Mark West at 12:18:00 No comments:

Email ThisBlogThis!Share to TwitterShare to FacebookShare to Pinterest
Labels: ginger nuts of horror, jim mcleod, review, spectral press, what gets left behind

What Gets Left Behind is almost here...

I signed off on the final cover (with text and blurbage) and the interior layout yesterday and from today, PDF review copies will be sent out by Simon Marshall-Jones, the publisher at Spectral Press.

"What Gets Left Behind" has been with me for a long time (since March/April of 2011) and I'm both excited and nervous about Mike & Geoff taking their first steps on their own into the big wide word but it's here, publication date is almost upon us and I have to let them go. 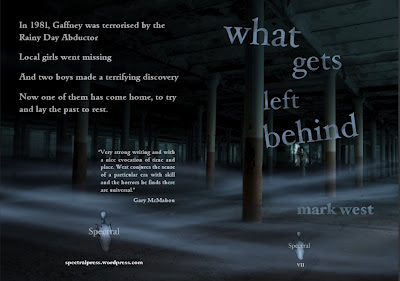 Email ThisBlogThis!Share to TwitterShare to FacebookShare to Pinterest
Labels: pictures, spectral press, what gets left behind 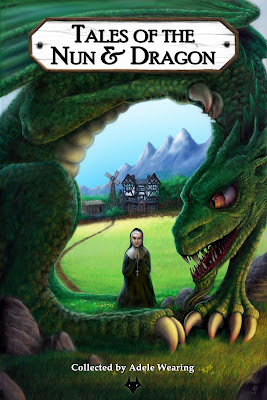 As the second volume gears up (more writers, more chills!), we thought it would be a good idea to offer "ill at ease" for a special reduced price (one week only!).

Why not take advantage? 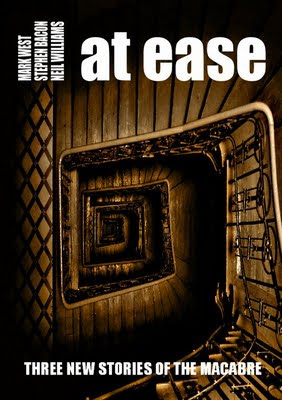 ill at ease is an e-chapbook collection from PenMan Press, available now from Amazon and Smashwords. Combining the talents of Stephen Bacon, Mark West & Neil Williams, ill at ease showcases three new tales of the macabre.

Waiting For Josh, by Stephen Bacon
Pete Richards returns to his hometown for the first time in years. His childhood pal is dying, and Pete realises he must face the past and confront some ugly truths if he is to fulfil his friend’s dying wish.
But the events of their childhood would prove to hold far more darkness than he’d ever imagined.

Come See My House In The Pretty Town, by Mark West
When David Willis travels to the picturesque village of Hoelzli, for a reunion with his old college friends Simon & Kim Roberts, he expects a weekend of laughter and reminiscing. But on a visit to the local fair, he manages to lose the Roberts’ seven-year-old son Billy and things take a decided turn for the worse.

Closer Than You Think, by Neil Williams
Dave is a loving family man, with a keen eye for a bargain. So when he spots a brand-new-looking child seat in a skip at the local tip, he decides to take it. After all, he needs one in his car to ferry his daughter around. But then he starts to notice things that seem otherworldly yet still familiar.
Could it really be an unquiet spirit, the echo of some past tragedy?
Or is it something else? Something that is much closer to home?


'Here are three writers with singular voices who have, nevertheless, somehow managed to merge their talents to imbue the whole of this slim collection with a kind of menace that is like oil on skin: difficult to remove and persistent. For relative newcomers to show such restraint, to trust in the subtle and the unsaid, is rare indeed. ill at ease is a treat, and I hope it finds many readers.'
Conrad Williams, British Fantasy Award winning author of One and Loss Of Separation

"Childhood memories, a seemingly idyllic English town, a car seat found in a skip... The three chilling tales from ill at ease ably demonstrate that horror can be found in the most mundane places, and a sense of unease is always much closer than we think."
Gary McMahon, author of Pretty Little Dead Things and The Concrete Grove

The book is available from Amazon - click the title below:

The collection is also available, on a range of formats, from Smashwords.

Don’t have a Kindle? No problem, Amazon provide a range of free app’s that allow you to read them on whatever device you might have:

Email ThisBlogThis!Share to TwitterShare to FacebookShare to Pinterest
Labels: ill at ease, writing

An interview with me, conducted by James Everington, has just been published at Penny Dreadnought, as part of their Abominable Gentlemen line.

It was great fun, with some brilliant questions - if you take a look, hope you enjoy it.

The direct link is here What Gets Left Behind (book trailer)

Here we go - it was sold out long before it was due to be published (in September) but all the same, here's the book trailer for my Spectral Press chapbook, featuring original music written (especially for this) and performed by the talented Gary Cole-Wilkin.

Mike & Geoff and the Rainy Day Abductor are about to make their way into the world and whilst I'm really excited about that, I'm also a little bit nervous...