In 1993, INXS were caught in a bit of a bind.  In the late 80s, with a succession of high selling albums that culminated in 1987’s KICK (which I wrote about here), they were one of the biggest bands in the world with a great live reputation to enhance their studio sound.  After taking a long break (they toured KICK for 18 months), they released X in 1990 and sold out Wembley Stadium with Summer XS in support of it (a gig I’m happy to say I attended and wrote about here), then followed that up with Welcome To Wherever You Are in 1992.  For me, that’s one of my favourite albums of theirs but as edgy and experimental as it might have been, they didn’t support it.  Mark Opitz, the producer, has said in interview “they didn’t tour on it, which they should have done because they could have had amazing sets…U2 released Achtung Baby and toured the fuck out of that. At that stage U2 and INXS were pretty much neck and neck, but when X came out it was like a dive. They didn’t tour on Welcome to Wherever You Are, which is sad, but it did go number one in England and [many] different European countries. We were all quite happy about that.”

By the time Full Moon Dirty Hearts came around, in 1993, it was clear that something was wrong.  The music still sounded great, the musicianship was still excellent but there were a lot of disconnects and reading the biography of the band, there were a lot of issues with Hutchence at the time.  Worse - to me (and being charitable, it’s not their worst album but it’s certainly down in the deeps) - they suddenly seemed to be swayed by public opinion, going for a terrible grunge-like cover (the lot of them, sat in the back of a transit) and apparently forgetting that INXS were good because they were INXS and not trying to be anyone else.

Opitz again: “Nirvana had hit big of course, and a couple members of the band said, “Let’s put all the rock songs up front. We’ve got to be more like Nirvana.” And I’m saying, “No, you’ve got to be more like INXS.” But management decided to go against my wishes with the running order and turned it into this quasi-album where songs didn’t fit with each other. Which I thought was quite sad.” 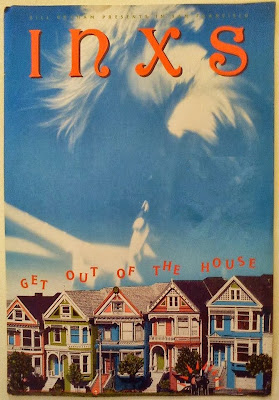 Caught up in a decline - but still a great live act - they made the decision for a worldwide tour in 1993 and it surprised a lot of people.  From massive stadia (not least the 74,000 sell-out audience at Wembley in 1991), they decided to go small.  Very small.  The Get Out Of The House tour was a back-to-basics affair, stripping everything down and benefitting greatly from a marketing campaign that played on it being a return to the ‘pub tours’ of old.  The idea was for INXS to take their music to the fans, playing gigs in towns they’d never played before and in venues that were much smaller than they were used to.

To generate more interest, ads and radio announcements were made stating only the city and date of each gig, with no mention of the venue.  Two weeks before the tour, tickets were put on sale at the local HMV (in whichever city) with the shop opening at 8.30am and selling tickets on a first-come-first-served basis (with a maximum of two per customer and absolutely no phone booking).  The venue would then be announced on local radio the day before the show.

I was very excited - having loved Summer XS and Welcome to Wherever You Are I was really keen to see them again, especially since my new girlfriend Alison (now my wife) was also a big INXS fan.  This was all long before the Internet, so you had to rely on the music press and when I discovered they were playing in Leicester on July 13th, I knew I had to go.  Since Alison (or our friends Matt and Steve, who also wanted to come) couldn’t get time off work, another friend - Steve, who wasn’t a fan - offered to come with me and we left Kettering at 4am. 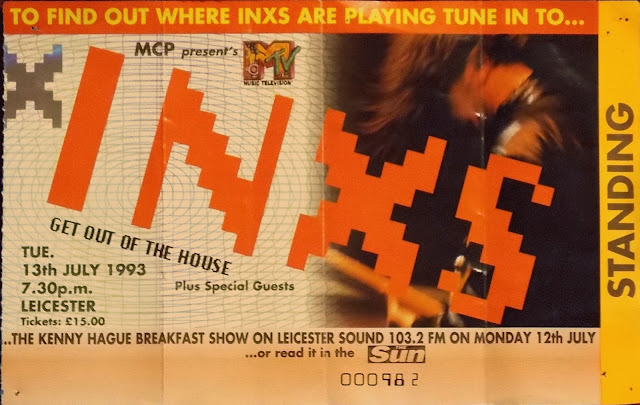 We were in Leicester for 4.30am and the city seemed alive with people as we walked from the Haymarket to HMV - street cleaners, old ladies with shopping bags and people our age.  There was a real buzz in the air and I was part of it and it felt great.  When we got to HMV we were the 72nd/73rd people in the queue - some had even camped out for the night - and there was a great atmosphere, as we chatted with the people around us.  The doors opened at 8am and we got our tickets, then went into McDonalds for breakfast as the enterprising manager had promised everyone from the queue a free hot drink if they did so.

To stoke excitement (though there was really no need - the tour sold out 40,000 tickets in a matter of hours), the band auditioned local groups to be their support act by launching a competition with Radio 1.  For the life of me, I can’t remember who supported them at Leicester but what an opportunity it must have been for a band at the time - I wonder if any of them went on and made their way in the world?

I followed progress of the tour in Q magazine and Select as it wound its way through Europe, reading reports of great gigs (with a grungey new sound), stage diving and the close proximity of band to audience. 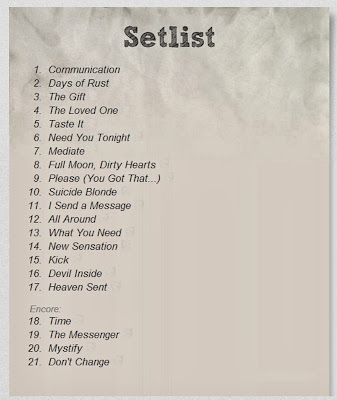 The tour hit England on July 7th at the Leed Town & Country club and finished 19 gigs later at the Feile Festival in Dublin on July 31st (and apart from the festival, the venues averaged a capacity of 2,000 people).  The set list was liberally spliced with songs that nobody knew - “Days Of Rust”, “The Gift”, “Full Moon, Dirty Hearts”, “Please (You Got That…)” “The Messenger” and “Time” were all from Full Moon Dirty Hearts - but plenty of good stuff from the back catalogue, including stand-out tracks from Welcome To Wherever You Are.

At the time, I subscribed to an INXS fanzine run out of Scotland by Fraser Ingram and he published my first ever gig review.  I haven’t written one since and, if you’ll excuse the fanboy witterings of an excited 24 year old, here’s the meat of mine.

“After making a more soulful album with Welcome To Wherever You Are, INXS have returned to their roots with a tour that takes in not 50,000 seater arenas but 1,500 seater ‘town halls’ which might seem a come down - but not on the evidence presented here.

INXS are famed for the power of their live sets and this gig certainly didn’t disappoint.  The DeMontfort is a small venue but their act didn’t seem to have been toned down much from when I saw them at Wembley two years ago.  Michael Hutchence clambered over every speaker he could and even climbed onto the balcony during “What You Need” to conduct an audience sing-a-long whilst taking photos of the crowd with a girls camera.

The set opened tentatively with “Communication” and two brand new songs, before “The Loved One” raised the roof and from that point on, the audience was eating out of their hands.  “Don’t Change” finished the set and as the band filed off and the crowd held up victory salutes to the departing Aussies, all you could hear were joyous comments from assembled fans who’d been near enough to their idols to smell them.

The band seemed to enjoy themselves immensely - slipping on water, laughing and joking, throwing drum sticks at each other - and Hutchence kept the gig alive between songs with his banter (though a crack about the Oz cricket team being the best got a murmur of disapproval) and the band really gave their fans the best show.”

Not all of the band were as enthusiastic, thinking the tour was too small, but Tim Farriss said in interview; “The shows were enjoyable, inspirational, and motivating, but at the same time I don't feel INXS belonged on the small stage.  The tour…actually worked best in the UK where we played theatres and universities - the UK just got the idea a little better.”

The tour won INXS some rave reviews and that goodwill carried over to the album.  "The Gift" was released as the first single in October 1993 and debuted at number 11, whilst the album hit the UK chart at the start of November and gave the band their second UK album Number One in a row.

I saw INXS with Hutchence once more after this - at the NEC with Alison in 1997 to support Elegantly Wasted - and although that was also a great gig, I still think the DeMontfort was the best one.  We’ve seen them twice since - at the NEC in 2001 with Jon Stevens and at the Southern Sounds festival on Clapham Common with JD Fortune in 2011 - but neither of those were anything special and, more, reflected the idea that the band should definitely have stopped when Hutchence passed away.

But the Get Out Of House tour was special, a glimpse into what they must have been like in the early days before mammoth PA systems and video screens became an everyday part of their touring life.  The show was intense, full of verve and energy and sweat and I’m chuffed that I was able to be a part of it.