The Art of Robert McGinnis

I have long been a fan of 'sleazy' paperback art (which helped inspire my anthology Anatomy Of Death) and one of the key proponents of it was the wonderful Robert McGinnis.  Since I haven't posted much of his work on the blog before I thought it was about time I showcased some.

Robert McGinnis was born on 3rd February 1926 in Cincinnati, Ohio and after apprenticing at Walt Disney Studios, he studied fine art at Ohio State University.  Following wartime service in the Merchant Marine, he went into advertising and, in 1958, was introduced to Dell Publishing where he began drawing a variety of paperback covers for writers like Donald Westlake (as Richard Stark), Erle Stanley Gardner and the Mike Shayne and Carter Brown series.  He painted over 1,400 paperback covers and his artwork has also appeared in such diverse publications as Good Housekeeping, TIME, Playboy, The Saturday Evening Post, Argosy and the Ladies Home Journal. 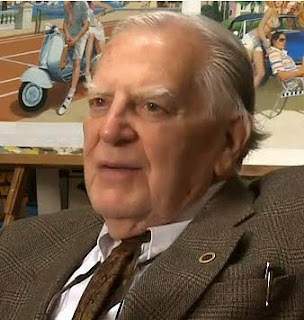 In 1961, he was commissioned to produce the poster art for Blake Edwards’ Breakfast At Tiffany’s and has gone on to create artwork for 40 films.  Along the way, he created the iconic James Bond pose - arms crossed, holding the gun, draped with assorted female arms.  Kiss Kiss Bang Bang (2005) features a series of pulp novels (and was apparently based on Bodies Are Where You Find Them, a Mike Shayne mystery written by Brett Halliday) and to add an air of authenticity, director Shane Black commissioned McGinnis to paint the cover art for the fake Jonny Gossamer books.

In 1985, he was awarded “Romantic Artist Of The Year” by Romantic Times magazine in honour of his many romance novel covers.  Since 2004, he has created cover art for the Hard Case Crime paperback series, including Stephen King’s Joyland.

McGinnis still paints and is a member of the Society Of Illustrators Hall Of Fame.

McGinnis & Bond
I don't know, it might be my age but I much preferred when movie posters were a selling tool, full of great artwork capturing exciting scenes from the films in question.  Looking at these Bond posters, it makes me think that EON is missing a trick - every poster from the Daniel Craig-era has just been a still image of him, why not give McGinnis another commission?