40 years ago today, Star Wars went on general release in the UK. 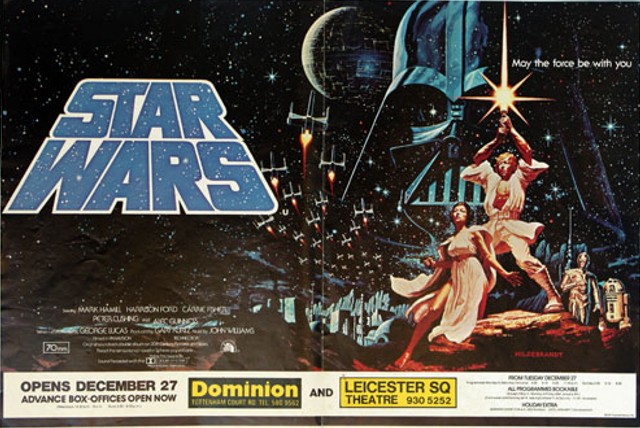 It premiered on 27th December 1977 and opened at the Leicester Square Theatre and the Dominion, Tottenham Court Road.  During its first seven days at the two venues, it took a record-breaking £117,690, beating out the previous record (held by Jaws) of £90,655 from 1976.  Back in the 70s, it was accepted practise that films always opened in London first, rolling out across the country afterwards and Star Wars stayed in London for over four weeks.  On the 29th January 1978 it went to twelve major cities around the UK and a further sixteen in Greater London the following week.
The BBC reported: "Thousands of people are flocking to cinemas in the UK to watch the long-awaited blockbuster, Star Wars - a movie which is already setting US box offices alight.  First released in America seven months ago, [the film] has taken audiences by storm and outstripped last year's blockbuster Jaws to gross $156m (£108m) at the box office.  Carrie Fisher, Sir Alec Guiness and little known Harrison Ford star in this fairytale set in space."

To help celebrate the 40th anniversary, I ran a thread on the blog last year looking at various aspects of the film and to mark today's momentous date, here's a recap of those entries.

September
A Brief History Of ILM
The Novelisation (pop-up 3)

October
Behind The Scenes
The UK TV Premiere (pop-up 4)