Raiders Of The Lost Ark, at 35 (miniatures, mattes, make-up and behind the scenes)

In August 1981, I went to the Ohio cinema in Kettering with my best friend Nick to watch Raiders Of The Lost Ark.  I'd already heard a lot about it and I'm happy to say it didn't disappoint on any level whatsoever. 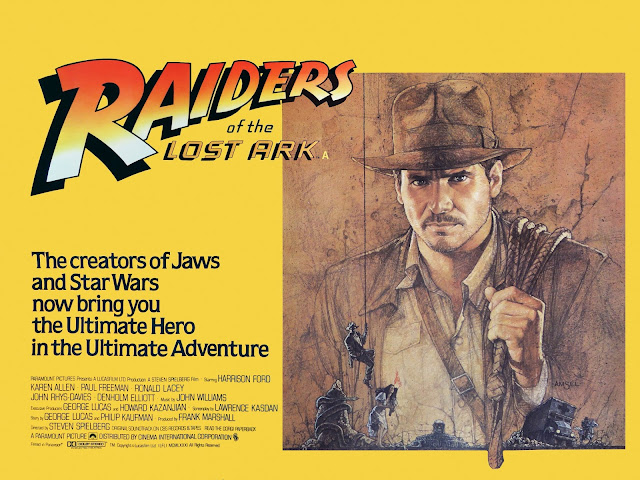 Rather than write my usual retrospective post to celebrate its birthday, I've decided to do something different for Steven Spielberg's excellent film.  As regular readers of the blog will know, I'm a big fan of behind-the-scenes processes on films (especially miniatures, matte paintings and make-up) and I thought this would be the ideal opportunity to take a look at some of the effects artistry in the first Indiana Jones adventure.

Raiders Of The Lost Ark, a Lucasfilm Ltd production, opened in the UK on 30th July 1981.  It was directed by Steven Spielberg, produced by Frank Marshall, Robert Watts, Howard Kazanjian and George Lucas and written by Lawrence Kasdan from a story by Lucas and Philip Kaufman. Douglas Slocombe was director of photography, Norman Reynolds was the production designer, John Williams composed the music and Richard Edlund of ILM supervised the special effects.  The film was edited by Michael Kahn and Dr Jones' iconic wardrobe was designed by Deborah Nadoolman.

make-up effects supervised by Chris Walas
The key make-up sequence (aside from loads of skeletons and the remains of poor old Satipo and Forrestal at the beginning) comes as Belloq (Paul Freeman), Dietrich (Wolf Kahler) and Toht (Ronald Lacey) open the Ark.

Life moulds of the actors in the screaming positions they would eventually be shown in were taken, from which Walas rebuilt the faces in the various materials required.
Dietrich has his head shrunk...
Toht melts...
And Belloq's head explodes...


Look out for another post covering "Temple Of Doom" and "The Last Crusade" coming soon...
Posted by Mark West at 09:00:00