I have a long (six years) association with NewCon Press and it’s one I’m very proud of.  The press is run by the great Ian Whates, who’s a lovely bloke, a smart editor (I’ve been in two NewCon anthologies so far, with another on the way and my Hauntings experience is one I treasure) and a dedicated writer with a solid work ethic.  He also runs my writing group (the Northampton SF Writers Group, or NSFWG) and I thoroughly enjoy those evenings, especially the market-gossip we indulge in after the critiques are done.

NewCon Press (you can read more of my adventures with them here) has now reached a landmark anniversary and when Ian decided to hold the 10th Birthday Party in London, I immediately accepted the invite (also swayed, I must admit, by the chance to spend time with writing chums). 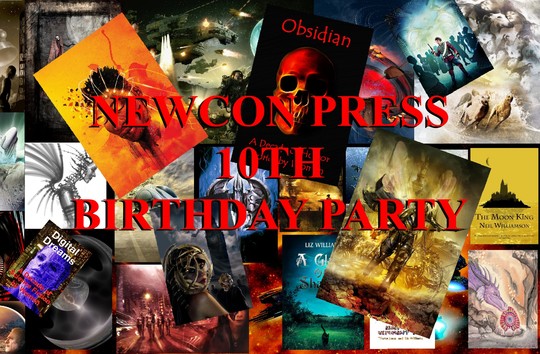 The day didn’t start auspiciously, as Midland Mainline had sold five carriages worth of tickets and only bothered to put on four (though I luckily got to sit down and read for most of the journey).  Just outside Luton, I realised the woman standing just behind me was pregnant so offered her my seat and she, her partner and I chatted as we rolled into London.  At St Pancras, talented musicians had taken over all three of the pianos with the last one, by the ticket office, finishing off a rousing rendition of the Match Of The Day theme, which got hearty applause.  I walked through to Kings Cross (spotted Kathy Boulton) and, as is my wont, tubed over to Covent Garden (but, unlike at the writer/blogger do earlier this year, I took the lift up this time).  I wandered around, took a selfie to sate my Frenzy-love and walked to the deli on the corner of Leicester Square, whose chicken-salad-ciabatta is just superb.  I ate it sitting on a wall in the centre of the Square, listening to a young girl sing Hallelujah (very well) and watching the world go by, which is a pretty good way to spend a lunchbreak.  I walked up to Hamleys to pick up a gift for Dude (laser pistols this time) and had a bit of celebrity-spotting success - as I was going up the stairs, Charlotte (who won this years Great British Sewing Bee, a programme Dude & I both enjoyed) was coming down - then, since it was after one, I tubed back to Kings Cross and walked up York Way to the pub, The Star Of Kings.
The NewCon party was in the basement, which was very hot (damp is probably a more accurate word) with no windows and a very low ceiling.  It was great.  The first person I saw was Kevin, who used to be in the NSFWG but had recently moved away and it was good to see him again.  He was with fellow NSFWG chums Paul Melhuish, Tim Taylor and Rod & Nelli Rees, so we chatted and had a laugh.  I went to get a round in, chatted with Rosanne Rabinowitz as we waited to be served (and wouldn’t you know, the free bar had run out by then), then sat with Donna Scott and had a catch-up.
On my way to get another drink (they put so much ice in the diet Pepsi I think you only got two or three mouthfuls) I bumped into Neil Bond (Donna’s hubby).  Haven’t seen anywhere near enough of him recently and it was good to catch up, he was talking to Pete Sutton and introduced us, then Gary Couzens wandered by.  Across from us, Kim Lakin-Smith was chatting so I grabbed her for a photo-op and got the lady she was talking to to take the picture.  Kim & I chatted for a while, then she went to find her husband and I chatted with her friend, who - I found out - was Bryony Pearce, who has a story in the latest NewCon antho Now We Are Ten.  We had no idea who the other was but got on well, talking about writing (YA, her field and horror) and how we get our own kids to read.  Great chat, lovely and interesting woman.  Spotted Kathy Boulton again and we got to say "hi" to each other this time.  Andrew Hook and Sophie Essex, who are always good company, joined us and we chatted about writing and conventions until Ian interrupted the room with a NewCon update, outlining the projects the press has ‘coming soon’.  I lost track of what was hush-hush and what wasn’t, so I won’t divulge anything, but it all sounded good.  Then there was cake.  And it was lovely.
Bryony went off to the signing line for the anthology, so I sat with Paul and we discussed our latest projects, the state of horror and what we planned for the future.  All too soon, it was time to head off.  I said my goodbyes (thanks for the book, Andrew!), found Ian and his lovely partner Helen (who gives the best hugs), thanked them for organising a great event and made my way out to the warm (but briefly chilly-feeling) outside, saying goodbye to Neil (who hugged me so I wouldn’t go so quickly) on the way.
An excellent day all round, chuffed to be part of the NewCon family to help celebrate its 10th birthday and, as always, it’s creatively invigorating to spend time with so many writers, poets and artists.

Happy birthday NewCon Press, here’s to the next ten years!
Posted by Mark West at 09:00:00