The Exercise (a novella)

I'm pleased to announce that the latest anthology from Terry Grimwood's The Exaggerated Press, Darker Battlefields, was published this past weekend and launched at Edge-Lit 5 (see my report here).  Edited by Adrian Chamberlin, it's a collection of six novellas set during periods of war and features my 18.5k word story The Exercise. 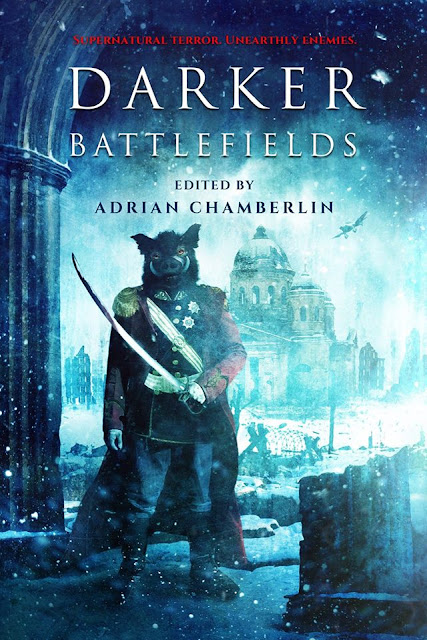 The Searing, by Paul Edwards

The Envious Siege, by Adrian Chamberlin

The Exercise, by Mark West

The book is available in print

This all started in late January 2015 with a message on Facebook from Adrian and Frank Duffy, asking if I'd like to be involved.  Since I've never written a story set during a war and I fancied the challenge - plus Terry produces some lovely books - I agreed.  I came up with the basic premise (soldiers on exercise during World War 2 who find themselves trapped in a building) on that evening's walk and then sat down with Mum & Dad a few evenings later, spending a lovely hour or so chucking around ideas (Dad is a WW2 buff so he was able to answer every technical question I raised, whilst Mum reminded me about the reeds in east Anglia and suggested having someone fall in a stream).

Once I decided to use shell-shock as a means of 'making my monster', I researched it on the web (and discovered that, by 1943 - when my story is set - it was being called "post concussional syndrome") and found some unsettling and distressing films on YouTube.

As a couple of little in-jokes, the hero is called Ray Ward (my Grampy, who served in WW2, was called Ray - I blogged about him here) and the Major who runs the operation is Desmond Boothroyd (I was watching a lot of Bond films at the time).  I also homaged Star Wars, when Major Boothroyd paraphrases Luke by saying "Well, my boy, if there’s a bright centre to operations in this country, you’re at the point it’s furthest from and that would be about three miles east of Potter Heigham.”

I had a lot of fun writing this and set myself the goal of not having any viewpoints (apart from the first chapter) other than Ray - if he doesn't see it or hear it, the reader doesn't either.  It made things tough a couple of times, but I also think it adds to the disorientation when the bad stuff starts to happen, because you're not quite sure what it is you're seeing.  I enjoyed writing the action, I enjoyed the camaraderie of the squad, I loved my monsters and the set-piece in the infirmary - which my friend David managed to make even more vicious with some helpful comments - was great fun to work on too.