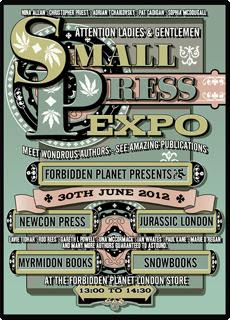 Saturday was the Small Press Expo, organised by Danie Ware and held at the flagship Forbidden Planet store on Shaftesbury Avenue in London. I was there, chuffed as could be, as part of the NewCon Press contingent (thanks to “Fog On The Old Coast Road”, which appears in the Hauntings anthology). 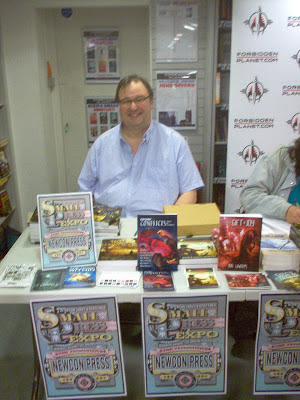 
I got into St Pancras for 11.45, had a wander around (picked up a Derek Meddings book from the Cinema Store) and was in the book department of FP for 12.30 as specified. I met Danie (we’re Facebook and Twitter friends, but this was the first time we’d properly met), saw Ian Whates and his partner Helen, got my name-badge (superbly designed by Sarah Anne Langton, another FB/Twitter friend I was meeting for the first time) and then we were off. The area we were in was packed with writers and visitors, I chatted with Donna Scott, Andy West and Paul Melhuish from my writing group, met Theresa Derwin and her sister, signed 30 or so books and had an absolutely fantastic time. I mean, how could I not? I was in Forbidden Planet, in London, doing a book signing! How cool is that? 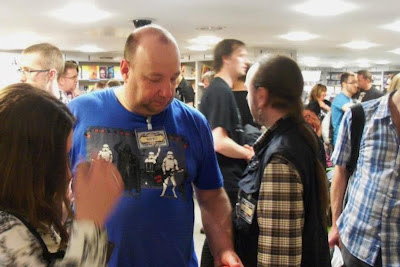 Donna Scott, me and Andy West, friends from the Northampton SF Writers Group


2.30 rolled around too quickly and the event wound down. I bought a Pokemon tin for Dude (my sole instruction), then Stuart Young took me to Cecil Court where he showed me a fantastic bookshop that I spent far too much money in. Afterwards, I joined the gang in the Spice Of Life pub (where I had a great conversation with Greg James and Ben Baldwin) before heading home.

The whole Hauntings experience has been great fun, from the live readings (see post here) to seeing the finished product but the signing was the icing on the cake. It was a great day, superbly well organised and it was a real thrill to be surrounded by some great writers and some vibrant small presses. Good stuff. And thanks, once again, to Ian and Adele Wearing who organised the anthology and asked me to get involved - I really appreciate it. 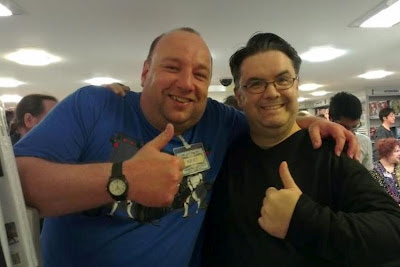 Me and my friend Mark Townsend, the bassist from The Blimeys, who came along to lend moral support


- - -
For those who couldn’t make it, I’m obliged to point out that the signed hardback (limited, I believe, to 100 copies) will be launched at FantasyCon later this year. I’ve already signed the plates and will be there in Brighton.
Posted by Mark West at 17:51:00