This follows up (and expands upon) an earlier post (see the original here) regarding my Grampy’s wartime diaries.

My Grampy, Ray West, was a kind and gentle man, always ready with a smile and I loved him dearly. I knew that he’d been in the war but I don’t remember ever discussing it with him because that’s just the way it was. People came home, they got on with their lives and tried to make the world a better place for their children.

When Grampy died in 1997, my Dad and my Uncle found some exercise books filled with his handwriting - it turns out that some fifty years after his experiences, he’d decided to collect his memories. Dad decided it was important to keep them and so he’s spent the last couple of years - doing a few hours a week, when he could find the time (my Dad is the kind of bloke who, upon retiring, is now busier than he’s ever been) - transcribing and editing these memoirs.

When he’d finished, he had almost 21,000 words of wartime reminisces by a man who wasn’t even a father when he was drafted and was almost thirty years away from becoming a grandfather. Dad asked me to read through them and critique them (he was worried about repetition though we both agreed that it was important to preserve his voice) and I was thrilled to do so. I miss my Grampy (and have kept a diary myself since 1981), so the opportunity to discover parts of his life that I never knew whilst he was alive was a tremendous draw.

Reading the diaries was a revelation, both in terms of observing the young life of a man I knew much later and also that he was able to absorb the horrors he (and his friends and comrades) witnessed. It gave me a newfound level of respect for a man I already held in high regard and I wished he could have been sitting in the next room, so that I could have told him as much.

Since Dad had spent so much time and effort on his editing task, I asked my friend Neil Williams if he’d typeset the manuscript (which he did, the star), then Dad & I designed the cover and I got the slim book printed up. When it arrived, Dad sat holding it for a long time, turning it over in his hands, opening it at random to read snippets and just generally revelling in what he’d achieved. It was lovely to watch him.

We’ve printed up enough copies to give out to family members and Dad’s also going to take one along to Grampy's old regiment, the 2nd Battalion Monmouthshire Regiment, South Wales Borderers, who want to curate as much history as they can get hold of for their archives.

Thanks to my Grampy’s desire to record his memories - and my Dad’s desire to make sure they survived - my son will now be able to read about the wartime exploits of a man he sadly never knew. 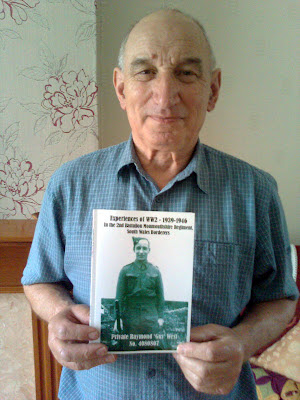 At the front of the diaries, Grampy wrote this (which I used as the preface).

This narrative may seem disjointed as it is over fifty years since it happened and some names and places are now vague. I was never a hero but had several near misses including being machine-gunned by aircraft, losing two of my trucks, being hit in a snowstorm by an American armoured car and overturning in a forest.

I was always lucky and always felt detached from danger even though some of my duties seemed dicey. 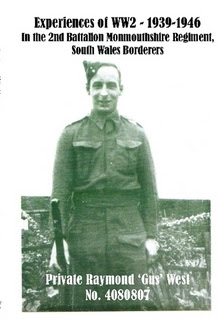