The Last Temptation Of Dr Valentine, by John Llewellyn Probert (a review) 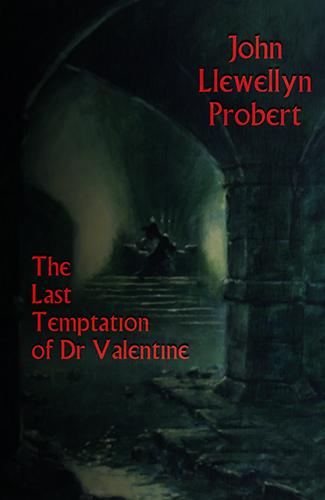 The city of Bristol is rocked by a series of horrific murders, each more gruesome and outrageous than the last, and all in the style of horror films starring Vincent Price.

The journalists who wrote about the case begin to die horribly, this time in the style of Hammer horror movies.

A Hollywood film company has arrived in Bristol to make a movie about the murders. Nicolas Cage is planned to star, and the screenplay bears little resemblance to what actually happened.

And someone isn’t happy about any of that. Someone who plans to use some of the most creative death scenes in classic British horror films to show these modern
film-makers just what a terrible mistake they have made.

The world’s most resourceful and flamboyant maniac returns…


John Llewellyn Probert is incapable of telling a bad story and his highly distinctive voice (both in real life, at one of his readings, as well as in print) is a real treat for a reader especially if you like your horror on the 'broader' end of the scale.

John has "been watching British-made horror films since he was ten years old, when he saw Dr Phibes Rises Again (1972) and Witchfinder General (1968) on a Vincent Price season on ATV. He was probably a bit too young for that second film, but the first influenced him to an extent that is still being felt by readers to this day..." and so he & I mesh wonderfully.  When I edited my anthology, Anatomy Of Death, which featured stories inspired by British horror from the 70s, we were on common ground and he supplied me with a wonderful tale that fully embraced the Hammer ethos.

Dr Edward Valentine, a surgeon driven to madness, is probably my favourite creation of his and appeared in two previous volumes, The Nine Deaths Of Dr Valentine and The Hammer Of Dr Valentine, both of which I thoroughly enjoyed.  Now republished in an omnibus edition by Black Shuck Books, I was lucky enough to pick up the Last Temptation hardback at FantasyCon and also got to see John's reading.

This fantastic novella featuring “the world’s most resourceful and flamboyant maniac” is not only a worthy addition to the canon but (as much as I loved the other two) probably pips them both as the best of the bunch.  This time around the good doctor bumps off his victims in and around Bristol (with a wonderful interlude to Weston Super Mare) and it’s a marvellous feast of British horror movies from the 50’s to the 70’s (with a nice touch to a much more modern film as well).  Told with great wit and style, this delirious tale of murder and mayhem races from one set piece to the next, each more inventive than the last, as Valentine attempts to up the body count while avoiding the attentions of his long-suffering nemesis, Inspector Longdon, brought out of retirement to take on the case by DS Jenny Newham.  Firing on all cylinders - in-jokes are salted away on almost every page and I wish the chapter titles were listed to show how funny they are - and told with an astonishingly quick pace, John has somehow managed to convey a film of this era in print and I read most of it with a grin on my face.  If you like your horror quiet and studious then it’s probably not for you, but if you’re prepared to throw your lot in with a writer who not only knows his stuff but can convey it perfectly, you’re going to have a great time.  Very much recommended.

The book also features "The Last Afterword Of Dr Valentine", where John lists the films that are homaged in the text, with a nice mixture of review, opinion and autobiography - and makes me wish I'd known the writer when we were kids (when I was ten or eleven, I didn't know anyone else who loved this kind of horror film).

I'll leave you with this, which appears on page 92 and - to me - perfectly sums up the tone of the piece.

"Well I think you're right on both counts, Newham.  We've got a crazed producer intent on risking his and his team's lives to finish his project, and a crazed killer intent on stopping them in the style of old British horror movies from the 1970s, but apart from that we have no idea how or where or when he might strike next."

The sun was up, now.  Longdon pointed to a cafe on the corner.

And now you can experience the full Probert experience as John's wife, Thana Niveau, filmed his FantasyCon reading - and I'm participating fully in all that laughter...