This Is The Colour Of Blood

I'm pleased to say that "Chromatics", the new anthology edited by Dean M. Drinkel, has just been published by Lycopolis Press.  It marks the fifth time I've worked with Dean and my story, "This Is The Colour Of Blood", features the third adventure for my recurring character Mike Decker (who also appeared in "The Zabriskie Grimoire" and "The Penthouse Incident"). 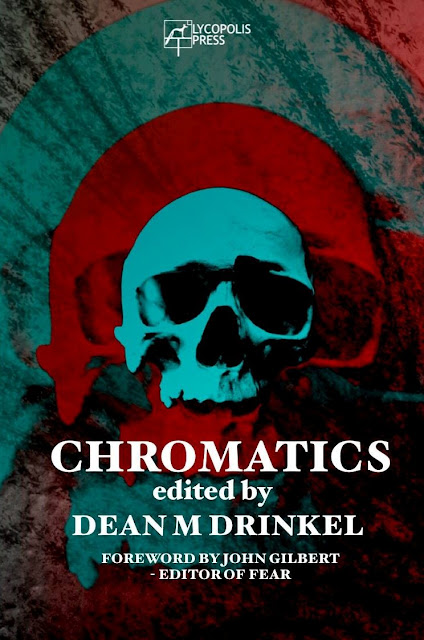 The Sand Was Made Of Mountains, by Anthony Cowin

The White Room, by Raven Dane

Born From The Greens, by Zak A Ferguson

The Spiritual Room, by Christopher Beck

This Is The Colour Of Blood, by Mark West


The book is available in print from Amazon

I like writing the Decker stories and they've now developed a bit of a pattern, which is quite fun to write to and this time round he describes himself thus: "I’m an acquirer, a finder of items lost or hidden and although it’s an occasionally dirty job, I am well paid for it.  I take my job very seriously and I expect other people to do the same.  I once had a meeting with a c-list celebrity who compared me to a personal shopper and I’d broken his jaw before he finished his sentence."

Dean got in touch with me in late July, when I was working on my novella "The Exercise".  I had the basic idea by the time I got home that night and the rest of it worked out over the next couple of evenings walks, then put it to one side until I was free to work on it.

When I got the idea for damaging Decker's beloved car, it was Dude who provided me the make and model, though when I Googled it I realised a certain plot point wouldn't work (though said research did lead me to something else, which strengthened the story, so that was good).  I also included a bit of an in-joke, in that the man who hires Decker - a powerful Russian called Krasniy - had two baddies, who I decided to name Drax and Chang.  Further on the Bond front, I watched "The Living Daylights" as I was writing this and it occurred to me that Decker might look like Timothy Dalton.  I haven't ever described him, but I think that's the mental image I'll have from now on.

The job seemed simple and that should have been my first warning - in my line of work, simple often ends up being a lot of trouble.

I met the Russian at The Glades, a central restaurant so exclusive you need references to get in.  The dining room was a monument to the Victorian era, with plenty of wood panelling and a very high ceiling.  It was early afternoon, most of the tables were occupied and there was a well-heeled hum about the room, as people ate and chatted quietly.

The Russian and I were sitting in a booth, his goons two tables behind me.  One was short, thin and bespectacled, an IT technician clothed by Armani and the other was Eurasian, big and wide, looking like a Sumo going for an interview.  Both had watched me come in, neither had spoken.

“You must try the foie gras,” said the Russian, as he signalled the maître d', “it is wonderful.”

A waiter arrived, put down two small plates of foie gras with mustard seeds and green onions in a duck jus, then left.  The Russian used his fork to break off a bit of the pate and put it gently on his tongue, as if enjoying the sensual delight.  “You are wondering why I asked to see you?”

I took a little of the foie gras and he was right, it was wonderful.  “I assume you need my service.”

The Russian smiled.  “Indeed, I have heard good things about you.  Do you know who I am?”

“I do, Mr Krasniy.”  Following his army service, Anatol Krasniy had embraced perestroika and soon had his fingers in a number of pies.  Through friends, he was involved in one of the loans-for-shares programs, quickly developed a healthy portfolio of shares in various oil companies and now his business dealings were extensive and far-reaching.  He made his base in .

"Very good.”  His English was perfect, if heavily accented.  He was lean and long faced, with a pale complexion and grey eyes that looked dead.  His hair was silvering at the temples and there was a small scar on his forehead.  His claret coloured three-piece suit was well cut.

“I have a daughter, a good girl, she kept out of the family business and lived in .  Last year, she came to , got involved with the wrong crowd.”  He paused and smiled, as if aware of the irony in his comment and made a shrugging gesture with his large hands.  “She is with child and now she has gone.”

“No, here in .  She was living with me, on a separate floor so she had her own life.  I only wanted to protect her, to give her and my grandson the best start.  Is that really so wrong?”  He didn’t wait for an answer.  “She went, last week, with no warning.  I had her tracked to a house in Stamford Hill and I want her to come back.”

“If you’ve tracked her, why didn’t you get her then?”

“Because she is very pregnant and I didn’t want the private dick to manhandle or frighten her.  I daren’t risk her life or that of my unborn grandson.  I need a professional to bring her in.”

“I’m not a babysitter, Mr Krasniy.”

He smiled but it didn’t reach his eyes.  “Nor am I, Mr Decker.  But you have a reputation, you have a style and I think you could help.”

I finished my foie gras and wiped the corners of my mouth with the heavy linen napkin.  “Just to bring her home?”

“Yes,” he said and gestured towards the goons.  “Drax and Chang will give you the details of her location.”  He finished his foie gras and wiped his mouth.  “But I must insist no harm come to her.”  He looked at me.  “No harm at all.”

The waiter came back, cleared our plates away and replaced them with two more.

“I can get your daughter safely, Mr Krasniy, for my usual consideration.”

He nodded, looked at his plate and smiled broadly.  “Ah, carpaccio with arugula.”