Gary McMahon & I have known one another for a long time now and I'm a big fan of his writing.  When Peter Mark May told me he was publishing a new McMahon novella (originally scheduled to launch at Stokercon this coming weekend, before the world went into Lockdown) I was thrilled, especially since Pete tends to send me Hersham Horror books to read through before they're released.  So I read the novella and loved it, got in touch with Gary to tell him and he happily agreed to answer some questions for me. 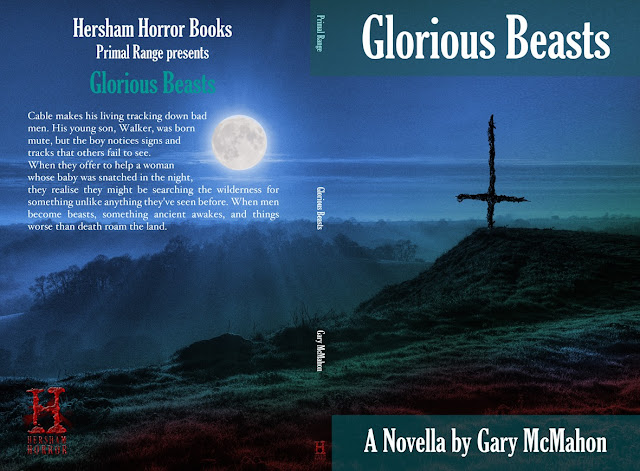 Cable makes his living tracking down bad men. His young son, Walker, is unable to speak, but the boy notices signs and tracks that others fail to see. When they offer to help a woman whose baby was snatched in the night, they realise they might be searching the wilderness for something unlike anything they've seen before.

When men become beasts, something ancient awakes, and things worse than death roam the land.


MW:   The novella is a tough read at times, with plenty of your trademark bleakness to it. Are you finding that kind of style easier to write as you get older or harder?

GM:   It seems to me that the older I get, the bleaker my worldview becomes. What’s changed is my acceptance of it. I no longer fight that pessimistic side of me; instead, I embrace it. I’m never purposefully trying to be “dark”. I’ve always just been the kind of guy who prefers the sad songs...

People always seem to go on about how bleak my work is, and to be honest it’s become a bit tiresome to me. I don’t think my writing is bleak. It’s sad. It’s melancholy. Shades of grey.

I personally believe there’s a lot of light in my work: a lot of heart, a lot of soul, and a lot of humanity. But a reader has to work for it. They aren’t getting it spoon-fed from me. To get to the light, they have to walk through a lot of darkness.

The world isn’t a very nice place. All people are not inherently good. Love is rarely enough to save you. Your scars won’t fade entirely.

It isn’t my job to reassure you. I’d rather deal in these harsh truths in my work than pretend the darkness doesn’t exist, or that it can be vanquished for good. All we can ever do is push it back for a while, but it always returns.

MW:   I know it’s difficult to pin a story down to a single image, but where did this come from?

GM:   I can tell you exactly which image came first, but it would be a spoiler. It’s the cruellest image in the story, the one that will hopefully make people wince when they read it.

Then I started thinking I’d like to tie in some of the mythology surrounding those big cats some people think are roaming the English countryside. The Beast of Bodmin and its ilk. I’d always wanted to use that in a story.

If I’m honest, a lot of Brexit paranoia probably found its way into the tale. We always use what’s happening around us, don’t we? It’s all meat for the beast.

MW:   The world is thoroughly well realised (if fleetingly described), did you do much research to get the look and feel of it?

GM:   I did no research whatsoever. I just wanted a world that was slowly winding down. Decades before, there’d been a plague that had wiped out half the population. The ones who survived abandoned a lot of modern technology and started to turn insular and feudal, fighting tribal wars. After those wars were over, beliefs began to slip back to those of medieval times. Things that were once local folklore became real. Witches. Warlocks. Mythical beasts like the big cat.

In this story, the world stopped advancing in 1974. That’s when The Plague Years began. Home computers hadn’t yet been invented. There was no internet. No mobile phones. None of that stuff.

There’s a lot of Mad Max in the setting, and The Hills Have Eyes, and The Road. Julia Leigh’s superb novel The Hunter. A book about the Sawney Bean clan I read when I was a kid. The structure was borrowed from the film Bone Tomahawk. I think it’s safe to say my story wears it’s influences on its sleeve.

MW:   Can you see yourself writing more in this world?

GM:   Oh, definitely. I’d actually like to write a series of novellas set in this world.

I’m sick of having to write mobile phones, the internet, and iPads into stories. It’s boring. I love the simplicity of this stripped back, hard-scrabble place, the characters that live in it, the limitless possibilities of telling simple stories that actually have a lot of substance behind them.
MW:   The novella has a brisk style, with wonderfully clipped dialogue and tells the story quickly and precisely. Do you prefer to work in this format, the short story or the novel or does it totally depend on the tale?

GM:   I find it tough to write novels these days. I think I burned myself out on the novel format a few years ago, when I committed to writing so damn many of them in a short space of time. I was also burned by poor sales. You bleed onto the page and nobody cares. It’s a harsh lesson to learn.

Glorious Beasts needed to be told in a spare fashion. The characters speak in a clipped manner because this is a hard, no-nonsense world. There’s no time for messing about with unnecessary niceties: these damaged people are all focused on survival.

I’ve always liked the novella format. I think it suits my clipped prose style. And it isn’t as daunting as writing a novel, as holding that whole world inside your head.

Novel writing, to me, feels so much like a form of madness. I’m a little scared to get back to that mindset. I will go back there, of course, but I’m not in a hurry. I’ll let it occur naturally, once I find a story that can’t be told any other way. I’m a great believer in the story dictating the form. I know there are more novel-length stories inside me, they just haven’t surfaced yet.


For more information on Gary and his writing, check out his blog here.