Five Years Of The Crusty Exterior

Another round-up post (following the Mixtape one a fortnight ago and last weeks Q&A one) as we continue in isolation and hopefully stay safe and healthy.  Out of everything, one thing I've really missed is interaction - yes, I've been online, I've spoken on the phone, I've video-messaged - but none of those compare with standing next to a good friend and having a chat.

To that end, on the fifth anniversary of our first gathering, here's a round-up of meetings with friends who mean a great deal to me (moreso now, because it seems like we might not be able to get together this year).
The Crusty Exterior is a group of friends, united in their love for the horror genre, books and, of course, a good curry.  The core of the group - James Everington, Phil Sloman, Steve Harris and me - met up for the first time at Andromeda Con in 2013 (see my report here), though Steve & I go back much further, first corresponding in the late 90s when he ran a newsletter called The Inner Circle.

At Edge-Lit 3 in 2014 (see my report here), we were talking about how good it was to see one another again and made plans to meet up at some point nearer to Christmas, though with Mrs Sloman and Mrs Everington giving birth as the year drew to a close, those plans were put back to 2015.  So we finally managed that first meet (organised by Phil) on April 13th 2015, starting at the Southbank Book Market and working our way through the capital's 2nd hand bookshops during the day.  It was great fun.

You can read the original post here (it's been very popular over the years, constantly in the top 5 of all-time viewed).

It would be three years before we managed to properly get together again (we all met up for Steve's 50th in 2017), though we'd all attended various conventions in between.  I organised this gathering in Leicester (the city has some great 2nd hand book shops and curry houses!) and our increased ranks had a cracking afternoon (incidentally, this was Linda & Steve's first date and I'm happy to say they're still going strong!).

The Crusty Exterior struck back in 2019 (with even more members), meeting in Nottingham (arranged by James), where we enjoyed the local pubs and bookshops, visited the Paupers Graves, played Horror Top Trumps and had an excellent curry.

You can read the full report here.

In addition, three quarters of the founding gang were involved in the Hersham Horror Books launch at FantasyCon-by-the-sea, in Scarborough, September 2016 (I wrote about it here) 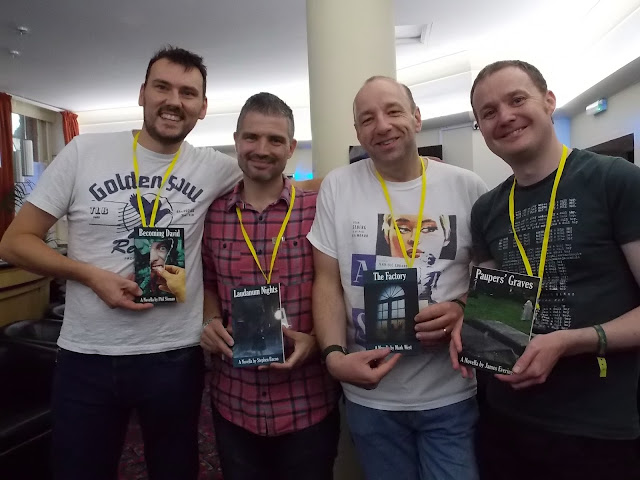 Celebrating birthdays - Steve Harris' 50th in Wolverhampton, May 2017 and my 50th in Leicester, February 2019


We also did our own variation on the mixtape, with a compilation of our favourite horror films for Halloween 2019.  You can read the full post here. 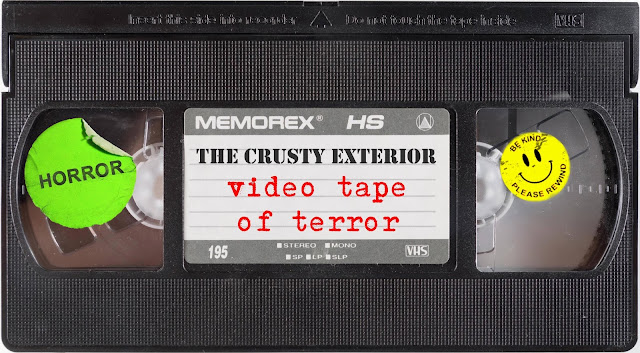 In case you were wondering, the name of the group comes from an off-hand comment made at Edge-Lit.  We were sitting in the cafe comparing scars (or, more to the point, the worst rejection letters we'd ever received) and, following Steve's newsletter, Phil said "we're not the Inner Circle, more like The Crusty Exterior".  That made us all laugh so when he set up an FB group to organise the meeting, that's the name he chose!

Stay safe, people and here's to many more meet-ups in the future!
Posted by Mark West at 09:00:00