Some mechanics of writing (or, location is the key)

As a writer, I am very keen on the idea of place - I want the reader to know exactly where they are, I want them to be able to see the location in their head, I want them to feel what it’s like to stand there. I think I’m pretty good at it and it’s something that gets mentioned quite a bit in reviews so I’ll be honest here and say that a lot of it is a cheat - I use real places, wherever possible.

Now, with my guilty secret exposed, here is the key location from my latest story “What We Do Sometimes, Without Thinking”, which was published in the NewCon press anthology “Shoes, Ships & Cadavers”.

The story takes place in Kettering (where I didn’t grow up) and centres around a bridge, at the end of the Headlands. That bridge does exist, as does the graffiti I mention in the story (which sets up the last act of the piece).

This is the first appearance of the bridge in the story:

The bridge was ahead, with signs warning me about cars, since the road led directly to the golf course. There was nothing on the road now. I rested my racer against the abutment and walked onto the bridge, which looked old but well kept. It was made with dark blue brick, as solid as you like, and the walls on either side were metal plates, with rivets half the size of my hand. At the far end of the bridge, on the west abutment, was a splash of graffiti – ‘Look Behind You!’ Directly across from it were a ravaged looking tree and some bushes. I leaned against the west wall, looking at the rails and waited.

And here is the bridge itself. These photographs were taken on 30th October 2010 (Dude & I were train-chasing) and the graffiti, which I first noticed almost 15 years ago, is still clearly visible. 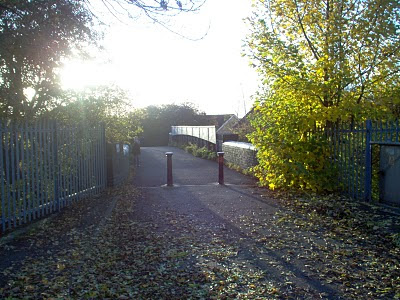 Looking onto the bridge from The Headlands. If you go over the bridge and down the hill, that's where the golf course is. 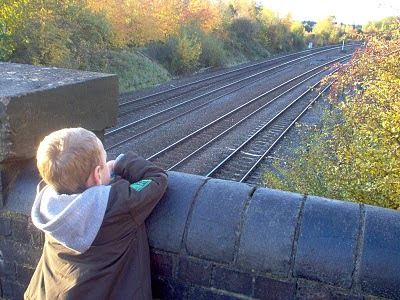 Matthew, leaning on the outer wall, waiting for a train 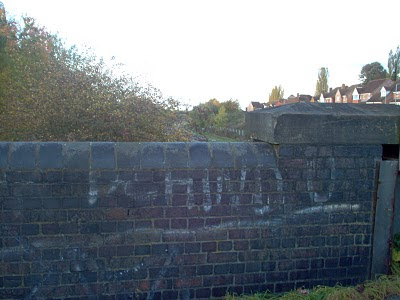