Late last night, Sue Townsend passed away at her home following a short illness.  She hailed from Leicester (sequences of the original Adrian Mole TV show were filmed there) and although I never got to meet her (I wish I had), her writing really spoke to me.  I read "The Secret Diary Of Adrian Mole, aged 13 3/4" in 1983, when I was thirteen - and it was brilliant, funny, sad and a work of genius (plus it had the lovely Pandora Braithwaite).

There's nothing else to say except that in 2012, as part of the Adrian Mole 30th anniversary, I re-read the original novel and it's sequel and went to an exhibition of her papers at the University of Leicester with Dude and our friend David Roberts.  And since she was a great writer, maybe that's the best memorial we can give her, to remember the joy of reading that she gave us (and think of all those people who picked up this book as the first one they chose for themselves, leading them - perhaps - to a lifetimes joy of the written word). The Secret Diary Of Adrian Mole, aged 13 ¾
Starting in 1981, this follows Adrian Mole from being the eponymous age to his fifteenth birthday, detailing every incident in his life over that period.

I first read this in 1983 (making me the same age as Mole - in the book, he mentions that his father is 41 making me 2 years older as I re-read it) and it’s just as bright, inventive and funny today as I remember it being back then.  From his complete self-absorption - he faithfully reports on his parents marriage breakdown, without realising what’s going on - to his obsession with spots, from his trying friendships to first love with the enigmatic and beautiful Pandora Braithwaite, this is as accurate a portrayal of a teenaged boy as I can remember reading (I’ve kept a diary since 1981 and sometimes Adrian’s entries could have been lifted my mine).

Funny, poignant and never less than readable, this is highly recommended. 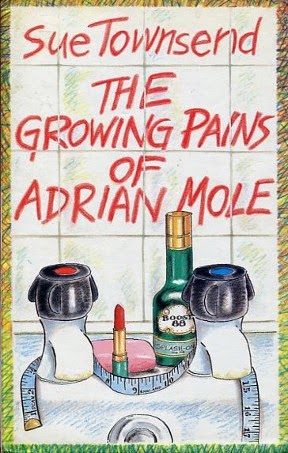 The Growing Pains Of Adrian Mole
Picking up the day after “The Secret Diary” ended, this volume contains plenty of turmoil in Adrian’s life - his mum and Stick Insect are both pregnant, which leads to the break-up of his parents marriage, there’s paternity issues on his sister Rosie (rat fink Lucas maintains she is his), his relationship with Pandora hits the rocks and he briefly ends up in Baz’s street gang, before running away to Manchester.

Slightly darker in tone than the first volume - the Falklands War is dealt with well - Adrian’s typical self-absorption means that it’s up to the reader to put together what’s happening and that helps the story well.

Still a lot of fun - with the added bonus to me that there are several references to my locale, namely on a Skegness holiday, their friend comes from Corby and one of Adrian’s letters is delayed when the mail train gets derailed in Kettering - this is a cracking read and very much recommended.

The following photo's were taken by David and myself at the University of Leicester, 27th October 2012.


RIP, Sue Townsend, you will be missed.