Following on from my post a fortnight ago for Tracy, about Charles M. Schulz and Peanuts, I thought I'd blog reviews of the three Coronet paperbacks that I've recently read.

Although Coronet wasn't the only Peanuts publisher in the UK, it's the one I most associate with them since it's the run that Tracy collected (I think at least two or three titles were published a year, if not more) and in the past few years (thanks to car boot sales, 2nd hand bookshops and ebay), I've started building my own collection too (as, in a nice touch, has Dude).

I read four or five titles a year and they're great - funny and enjoyable in their own right, but also because they bring with them a wonderful sense of nostalgia. 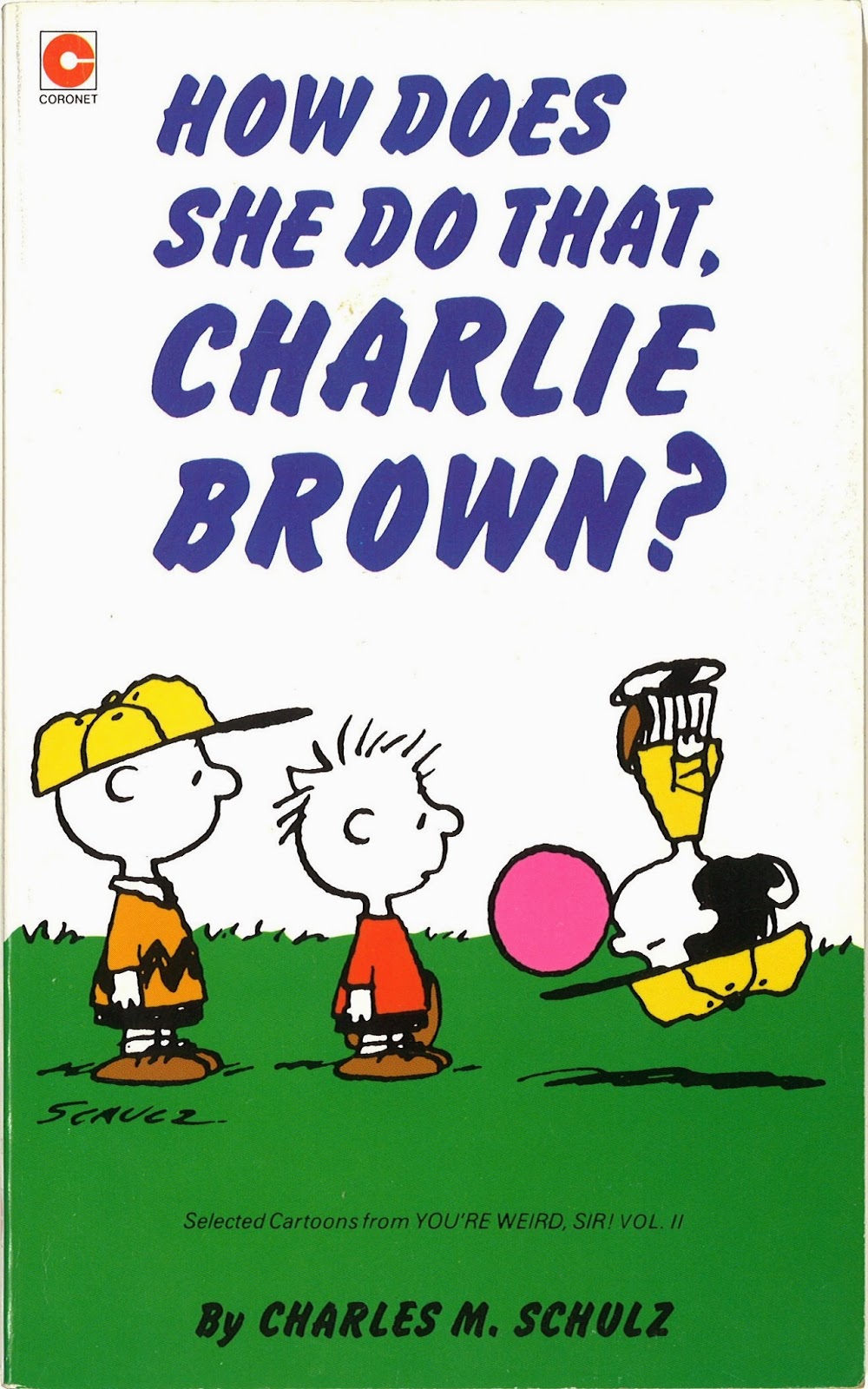 How Does She Do That, Charlie Brown? by Charles M. Schulz
Another excellent collection, this time selected from “You’re Weird Sir, volume 2”, it was published in 1985 (I read the 1988 Coronet edition), though the originals date back to 1981.  Featuring most of the gang, with a fairly well spread level of exposure, this is often laugh-out-loud funny and also contains several of those trademark Schulz moments of poignancy (Charlie Brown, alone in the rain, at the baseball field).  Highlights for me include trying to find Woodstock’s mum and his response to Snoopy wondering if he’s a dove, Lucy sulking in her beanbag, Snoopy as a lift operator, the Masked Marvel playing golf, Woodstock discovering Atlantis at the bottom of Snoopy’s waterdish, Lucy floating away with bubblegum, a bug sportsday in Snoopy’s waterdish, Sally worrying about school, “Dogs can do lots of things that birds can’t do!” and Linus’ splinter.  There’s also a wonderful panel, of Snoopy and Charlie Brown sitting in a beanbag, that is just perfect.  Wonderfully witty, funny and occasionally melancholic but with a really grand spirit, this is one of the better collections and I can’t recommend it highly enough. 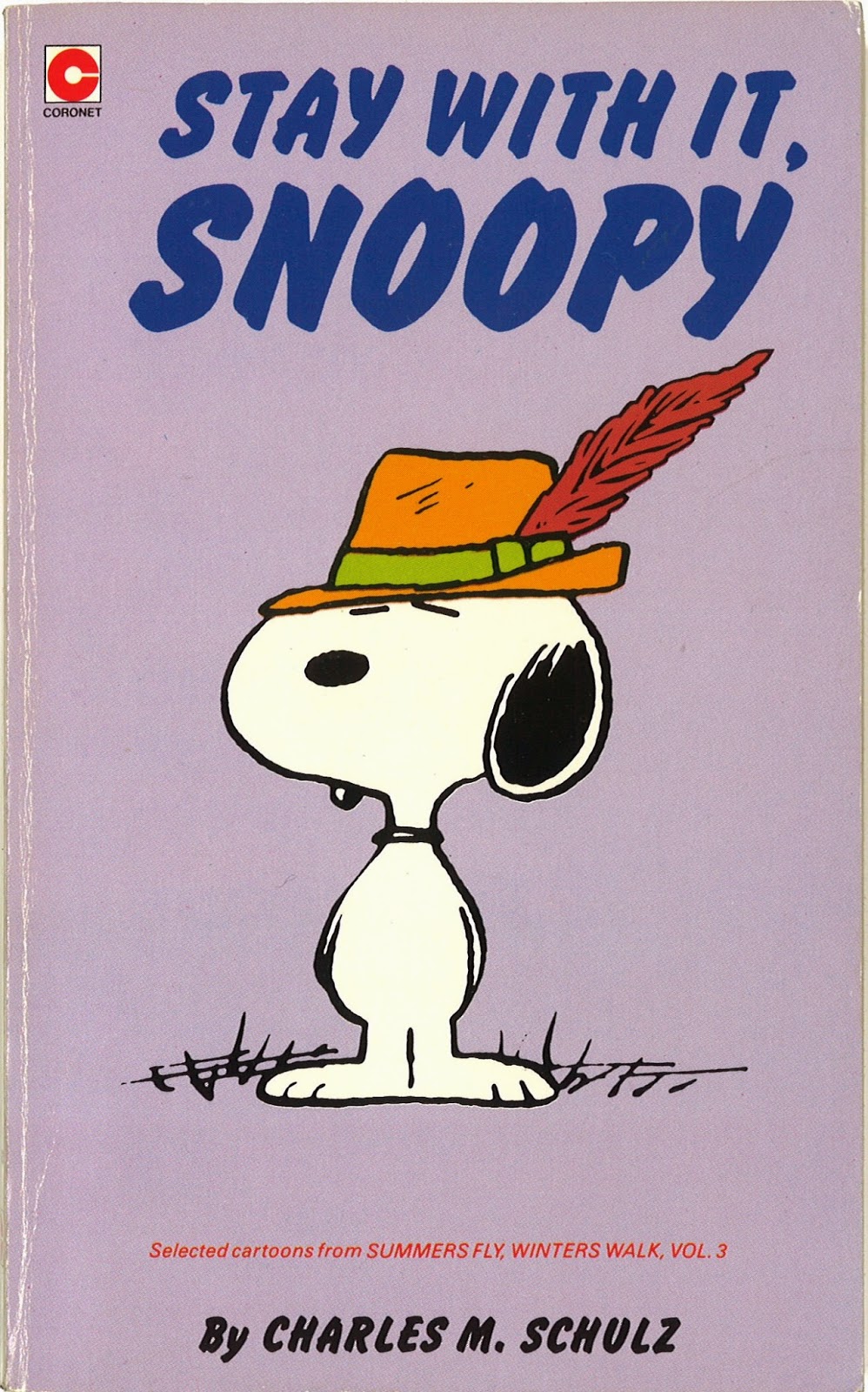 Stay With It, Snoopy, by Charles M. Schulz
A top quality collection, selected from “Summer’s Fly, Winter’s Walk, vol 3”, I have the 1981 Coronet edition though the originals appeared between 1976 and 1977.  Set in the run-up to - and just after - Christmas, this features most of the gang enjoying the season and captures the spirit of it well.  Often very funny, it also has a few splashes of the melancholy that Charlie Brown often brings to the proceedings (he wants to see Lucy at her psychiatry booth but it’s too cold for her, so he talks to her stand-in snowman instead).  The highlights for me include Snoopy and Woodstock talking about Thanksgiving (Woodstock pretends to be a dog), Snoopy and Woodstock in the snow, Sally’s letter to Father Christmas, Peppermint Patty’s book report, Snoopy’s present of a trilby from Sally (the cover image), Snoopy’s morning after Woodstock’s New Years Eve party (“I didn’t fall in love, I drank too much ginger beer and I feel thirty years older”), Snoopy’s Cheshire beagle trick (that goes wrong) and Linus meeting up with Truffles again (and the helicopter escape, with Snoopy and Woodstock).  Warmly nostalgic, pitch perfect, funny and poignant and immensely readable, this is a great collection and I highly recommend it.

You're A Brave Man, Charlie Brown, by Charles M. Shulz
I hadn’t planned on reading another Peanuts book for a while but Dude finished this last night and loved it so much he suggested I read it straight away.  I’m glad I took his advice.  With selected cartoons from “You Can Do It, Charlie Brown, vol 2”, this 1970 Coronet edition (we read the 1975 seventh impression) features strips that were originally published in 1962 and 1963 and it’s a superb read.  It’s very amusing (there are a couple of Snoopy related incidents that made me laugh), there’s plenty of Charlie Brown’s melancholy to ground it and since this was written before Peppermint Patty appeared, we get other good characters, like Violet and Patty and Frieda (with her “naturally curly hair”).  The book starts at Christmas, as the kids think about the season - Lucy’s letter to Santa is amusing, her complaint that the years go by too fast echoes my own thoughts - and there’s a lovely moment (the panel is inscribed “Merry Christmas”) where Charlie Brown leaves a turkey in Snoopy’s bowl.  Highlights for me include Linus’ ‘blanket-hating’ grandma, the ethics of baseball - and supporting Charlie brown, the latch of Snoopy’s kennel breaking, Linus and the cattle business, plus what happens when he misses the honor roll, the joys of a new baseball season, Mrs Van Pelt getting a new pool table (with a tangerine coloured cloth) and Snoopy and the spider (Dude’s favourite strip in the book). 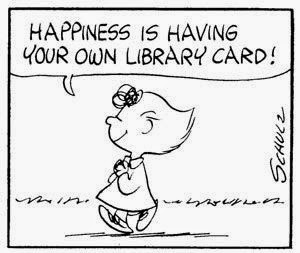 My favourite strip was Sally, being introduced to the concept of libraries by Charlie Brown - “Happiness is having your own library card!”  Wonderfully nostalgic, superbly written and drawn, funny, poignant and memorable, this is a terrific collection and I can’t recommend it highly enough.