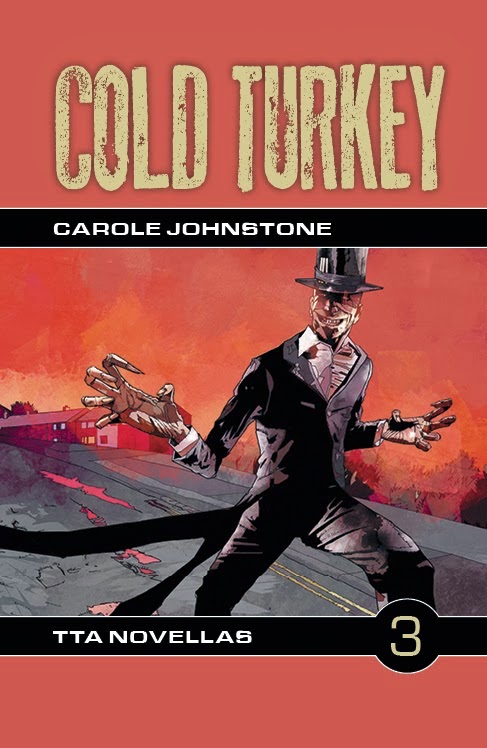 Raym’s hand froze in front of his chest, creeping back up towards his throat again. “What?”

“In a funny square van.” The kid blinked, blinked, blinked. He wooshed his hands either side of his body like he was starting a drag race, and Raym flinched again. “It’s got black tails – really, really looong ones, like party streamers!”

All Raym wants to do is give up smoking. So why is his entire life falling apart? Why are new mistakes and old terrors conspiring against him? Why is he being plagued by the very worst spectre from his childhood? And why does giving up suddenly – horrifyingly – feel much, much more like giving in?

Raym Munroe has been a smoker since he was eight and even though he’s lost both parents - heavy smokers themselves - to cancer, he can’t seem to give the habit up.  But now he’s determined to and he’s doing to do it cold turkey.  A teacher at the school he went through as a kid (the Head teacher is the same man), he’s stuck in a dead-end job, in a dead-end town and tolerating a relationship with Wendy, who he’s been with since University.  They don’t like each other at all but that’s the way Raym’s life goes - he’d rather live with being unhappy than make a change.  As he begins to suffer nicotine withdrawal symptoms (though he’s more concerned with the ‘junk’ the Chinese put into their cigarettes) he begins to have what he believes are hallucinations, where he’s pursued by a spectre from his childhood, Top Hat the tally man.  This monster is tall and skinny (and beautifully captured on the cover art), with his crooked top hat and overlong tails and his hideously extended fingers “as sharp as dressmaking scissors” and appears to Raym in both his dreams - which are very well done in themselves - and chasing him as he walks to school.  It’s only when two children, both of them misfits, say that they can see Top Hat too that Raym realises his entire life is starting to crumble.  His dreams of the man become more vivid and after a particularly harrowing one - where Top Hat has ‘Imperial Superkings’ for fingers and burns Raym’s arms - he carries the same wounds into real life.  Sent by the head to see a hypnotherapist, who tells him it’s his brain fighting against itself, Raym not only starts losing hours from his life (corresponding to sneaky fag breaks) but he is assigned an LSA, a pretty young woman called Caitlin “Cate” MacDonald.  It’s not long before Raym and Cate are having an affair - their initial tryst, in an alley behind the local pub, is both grubby and erotic - but he thinks he can get away with it, slotting their time into the ‘lost’ hours.

This is an excellent novella, beautifully constructed and filled with wonderful little moments of humour- Raym braved the staff room with all the stoicism of a soldier shoved screaming over the top.  The characterisation is precise and clever - Raym isn’t generally a nice man (especially with Wendy and Cate) but you somehow willingly follow him and feel sympathy for his plight - and there’s a nice use of dialect too (especially the key phrase “Yer tea’s oot!”).  The male viewpoint is well captured and when everything goes wrong for Raym during the Easter Fayre, it all happens in a perfectly pitched sequence that is embarrassing and funny and painful but which you cannot look away from.

Johnstone doesn’t shy away from the dark side of things though, with some unpleasant sequences and an occasion of brutally shocking violence, as reality and fantasy intertwine until Raym (and the reader) are never quite sure what is actually happening and what’s imagination.  As an ex-smoker (and someone who loved King’s “Quitters, Inc”), Raym’s reactions and thought processes really rang a bell with me and I would suggest that this is written by someone who fully understands the pain of quitting smoking, even when you want to.  Top Hat is a superb creation, a ghoul who looks as if he’s stepped complete from a nightmare and it’s a testament to Carole Johnstone’s skill that she can make excellent use of something fundamental to your childhood - the ice cream van and the nursery rhyme Hickory Dickory Dock - and corrupt them both completely, making each one frightening and unpleasant.  Superbly written, with a great feel for character, dialogue and location, this is a great read and I highly recommend it.