The Latchkey Children, by Eric Allen

Another book review and an unusual one this, since the short novel in question is 50 years old this year, not horror and is probably best classed as a childrens book (there was no YA then!).  It was purchased after spotting it (and vaguely recognising the title) when I was browsing on ebay. 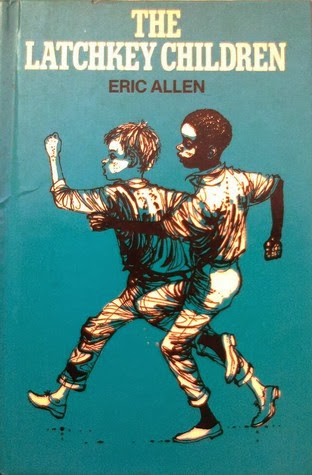 The Latchkey Children of the title are a gang of kids (who are around 11 years old or so), most of whom live on the St Justins Estate on the Thames Embankment and meet in the park after school.  Their focal point is an old tree so when the council decides to get rid of it - and replace it with a concrete railway engine (“but that’s for kids!”) - the children decide to mount a protest.  The story follows them on this protest - and in various adventures along the way.

Although this was originally published in 1963, it hasn’t really dated at all (aside from some phrases the kids use - “I say!” - and the currency) and could easily apply to the childhoods of 70s and 80s kids (ie, me).  It treats social issues head-on - Mr Jellinek, the Estate Manager, was in a prison camp before escaping to this country - and there are kids of various races and religions about, most of them treated fairly normally, though the kids do overhear racist comments.  Initially, the gang consists of four friends - Janette Stone (known as Etty), William Benjamin (known as Billandben), Gordon Frogley (known as Froggy) and J. J. Greavy (known as Goggles) - with Goggles the unofficial leader (though he lives across the river, with his aunt and is very conscious of his loner status).  The group later expands to five with the arrival of Duke Ellington Binns, who helps Froggy escape from bullies and slowly becomes his friend - Binns likes England well enough but misses - and talks often of - his hometown Port Of Spain, in Trinidad.  The group has a rival gang, the kids from the Peabody Estate, led by Bletchley who does his best to cause as much trouble as possible (he’s currently on probation for putting a box on a railway line).

When the kids go into London to start the protest, Goggles goes to see his MP whilst Etty and Billandben, failing at seeing the local council, take a trip up to Hampstead Heath.  Which attempting to rescue a cat there, they are helped by Malcolm McCrae, a TV reporter and they get him involved in the fight too.  Things soon escalate, until Duke’s Dad gets involved and the resulting industrial action which spreads across London highlights the fight for the tree and the novel ends on a hopeful note.  It also ends with a sense of melancholy too, as they all realise that the end of the summer holidays means them going to new schools and making new friends, thus having everything they know change.  The last exchange, between Goggles and Froggy, is at once funny and touching and it’s the perfect way to leave the story.

This is a terrific book which, even though it’s clearly for children (my edition is the 1982 Heinemann hardback), it has a refreshing attitude both in terms of how the kids are with each other (they make friends and fall-out and none of it feels contrived) and also that it doesn’t treat the adults are complete idiots.  Certainly, the kids are in control of the story but most of them make the philosophical connection that they can’t really engender change until they’re older as most adults won’t listen to them.  The dialogue has a natural pace to it, the amusing moments are played well but so are the more poignant ones, especially those of Goggles and Etty, the two characters who seem to have more of the weight of the world on their shoulders.

Briskly written, whilst never short-changing dialogue or description, this has a good pace throughout and several brilliant set pieces and you really feel for the kids and their plight.  The book also contains plenty of line drawings from Charles Keeping (he also did the cover art), though some of the illustrations make the characters look quite grotesque.  Overall, this is a great read and I’m really glad that I not only found it but also that I took a chance on it.  Well worth a read.

nb - The title comes from the term given to children who go home from school to an empty house (wearing the keys on a chain around their neck) because their parent or parents are at work.  Whilst it was originated during the Second World War, it came of age in the 60s and beyond. 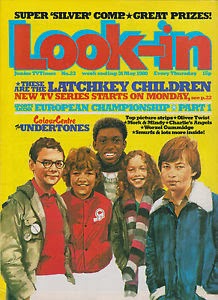 As a kid who went to the Saturday morning pictures in the 70s, there were parts that I thought would have made an excellent Childrens Film Foundation movie but it actually appeared in two incarnations on ITV.  The first was as a two-parter under the “Books To Enjoy” adaptions series in 1970 and then again, as a six-part series, in 1980.  I only have vague memories of the latter (none of them enough for situations in the book to ring any bells) aand whilst researching this on Google, I think some of that might come from the Look-In cover I found.  Interesting to see that the series started the careers of Indra Ove and Kwame Kwei-Armah.
Posted by Mark West at 09:00:00