In memory of Tracy, after ten years

Ten years, in terms of anything, is a long time.  People look back over decades and think ‘wow, is that when it happened?’ and then they wonder how that time could pass by so quickly.  I think that often.

It was ten years ago that I was sitting in the canteen at work with a colleague, when the telephone rang.  It was Mum.  She told me she had bad news and I paused, expecting to hear something about my Gran having fallen over or something.  But it was much worse than that.  Mum told me that she was at Leicester hospital, walking back to the car with my Dad and that my sister Tracy was dead. She was 32.

Tracy was two years younger than me and I think we spent most of our childhood (and a good chunk of our teens) fighting like cat and dog, though we were also fiercely protective of one another.  She developed MS late, a few months into 2003 and suffered upwards of six relapses as the year wore on.

An active person - she was a riding instructress - I can’t imagine how awful the lengthy hospital stays must have been for her, but I never really heard her complain about it.  At the time, Alison & I were trying for a child and Tracy kept track of our appointments at the hospital, asking how things were going and trying to gee us up as each month passed. Visiting her at Leicester Infirmary was often a difficult experience - I loved to make her laugh and would do pretty much anything in the pursuit of that - and it was painful to see her try and do things as her body rebelled against her.

But things seemed to be improving - we saw her on the Sunday and she was sitting up in bed, bright and lucid and Mum & Dad found the same thing on the Monday evening.  We had high hopes for these signs of recovery but on the morning of November 25th, 2003 (my Dad’s 60th birthday), she collapsed beside her bed.  The cause of death was later given as a pulmonary embolism.

I left work, got Alison and we went straight to Mum & Dad’s house that day.  Our younger sister Sarah was in Derby at Uni at the time so I drove us all up there to deliver the news. We arrived just before she got home and she got out of her car and seemed excited, as if we’d all gone up to see her for Dad’s birthday. Until Dad went across the road and told her the real reason.

Tracy’s funeral service was held in the Parish church in Rothwell - I’ve never seen so many people in there - and I read the eulogy. The burial was held at the little cemetery on the edge of town and it was a cold, dank day. Afterwards, we went back to the Trinity Centre for tea and some food. Nick was with us (he and Tracy got on really well), staying overnight at ours and supervising the taped music at the service. At the wake, he busied himself making sure that everyone had a drink and something to eat, whilst the rest of us just seemed to reel around and try to connect with people.

Since then, Dad hasn’t been keen to celebrate his birthday, which is understandable and instead we have a quiet gathering of the family, which has grown in ten years - Sarah married Chris and they had Lucy & Milly, we had Dude.  A lot has happened since then but it really does seem like only yesterday.

I miss Tracy a lot, as do Mum & Dad and Sarah and Alison.  Matthew never met her but he knows who she was and what she meant to me and he keeps an eye out for Snoopy stuff because he knows she loved it.

That’s all I can do, I think - talk about her and make sure that her memory continues to burn brightly and I will try and do that forever.

Ten years and gone too soon, I miss you Tracy. 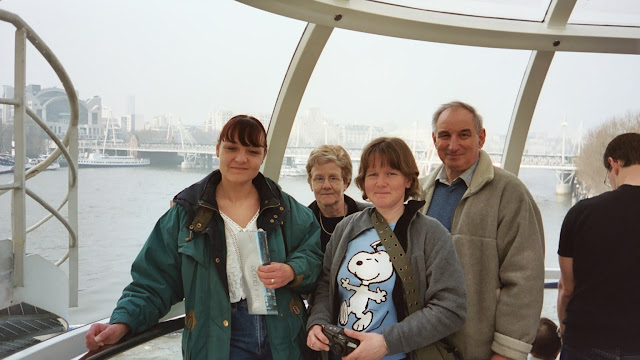