The Language of Dying, by Sarah Pinborough 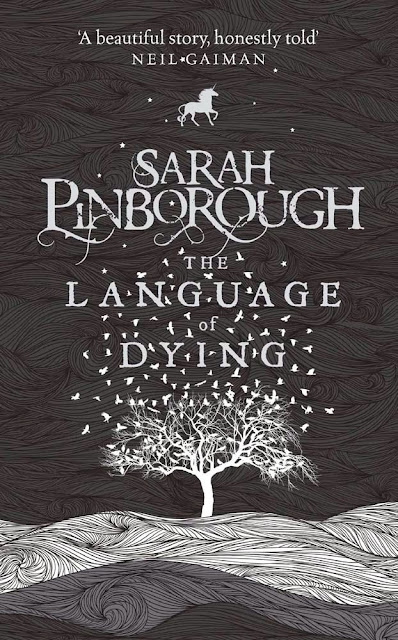 Tonight is a special, terrible night.

A woman sits at her father’s bedside watching the clock tick away the last hours of his life. Her brothers and sisters – all traumatised in their own ways, their bonds fragile – have been there for the past week, but now she is alone.

And that’s always when it comes.

As the clock ticks in the darkness, she can only wait for it to find her…

Quite simply, this is a beautiful novella, a deeply felt and very moving exploration of family bonds and the ways they can be twisted, strained and - maybe - broken by death (even if that event hasn’t happened yet).  On a personal level, I found some of it difficult to read and I’m not certain it’s something I could re-read, but that’s not to the detriment of the craft on display.  Indeed, Sarah’s writing is so assured, the flow of the language is so right, that you read on even when you desperately want to look away or wipe at your eyes.

The unnamed narrator is the middle of five children.  Paul is feckless, a man who goes with the flow and shuts down or runs away when life turns on him and Penny is glossy and keen on appearances, someone willing to suffer just so long as she doesn’t make a scene.  The younger siblings, Simon and Davey, are twins who have taken a different path to their brother and sisters, becoming addicted to various things.  The narrator weaves amongst them - she’s telling the story to their father, who is dying of cancer - as everyone gathers at the old family home for their Dad’s last days and old bitternesses and comradeships are rekindled.  The narrator feels kinship with her Dad, a man whose life never quite worked out how he wanted it to and even though we only get to see glimpses of him pre-cancer, he’s vividly portrayed.  In fact, the characterisation is the books key strength, with even minor players - the narrators ex-husband, the various nurses - so clearly defined that they remain vivid long after their part in the story is over.  Paul is a fleeting character, present more by name and memory than physical being (as is Simon), whilst Penny is sad and funny and scared and strong.  Davey, addicted and conflicted, really comes through as the story progresses, a kid who took a wrong path and the adult who’s still trying to make better.

But the story stands and falls by its narrator and she’s a wonderful creation.  Still tortured by the abandonment of her mother when she was ten (with a childs perception of the event - “we all know in our hearts that it’s our fault for not staying little for long enough.”) she patiently awaits the return of a wild unicorn she believes she saw on that night, whose pounding hooves and breathing she keeps listening out for.  She’s also very aware that everything is in flux and that once their father goes, things will change forever and not necessarily the better -“Buried in the scent of fresh sheets and the warmth of my sister, I store each second safely away so that I can savour this time in the years to come.”

With her own life - and innerself - in a state of turmoil (her failed, abusive marriage is painfully detailed and the image of her lying, bleeding, at the bottom of the stairs is one that’ll stay with me for a long, long time), the book ratchets up the tension as the siblings leave and their father grows ever weaker.  Trying to help him as he lies in bed, the narrator moves her fathers arms under the covers and worries she’s hurting him - “Sorry, Daddy,” I whisper, “I’m sorry, Daddy.” - and that did it for me, even though it’s not the end.

Not a novel for everyone, certainly, this is poignant and raw, loving and tender, brutal and beautiful and it will reward the reader who engages with it and, I think, it’ll stay with them for a long time after they’ve put it down and cleared their throat and wiped their eyes.  I can’t recommend it highly enough.


This novella originally appeared in a  limited edition by PS Publishing in 2009 but is now being published by Jo Fletcher books (the edition I read) on 5th December, as a beautifully designed hardback.  Whilst it's presented as a horror novel (and there are elements of horror in it, but all of the real kind), this only has mild supernatural elements and is on a par with the fine work of Graham Joyce.  The only reason I mention this is that if you don't read a book because "well, it's horror", then you should really take a chance with this.