An Audience With Sir Roger Moore

I make no secret of the fact that I’m a massive fan of Sir Roger.  Starting with “The Persuaders” - that music! - and catching up with “The Saint” (Dad was a big fan, though Ian Ogilvy was my generation’s Simon Templar), he was my James Bond.  The first Bond films I saw at the cinema (as I blogged about here) were “Live & Let Die” and “The Spy Who Loved Me” on a double bill and I’ve been a massive fan of him (and the films) ever since. 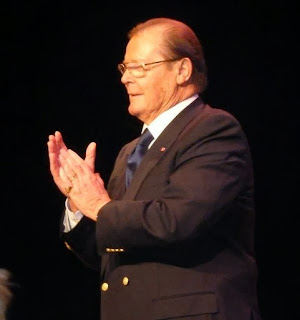 Sir Roger came onstage, ramrod straight and steady and although he looks his age (and commented that his knees aren’t working so well any more) there was still a twinkle in his eye and a zest in his delivery that kept the audience rapt and respectfully quiet.

We were in the 2nd row from the stage and so had excellent seats, though there was a large video screen on hand too - I had to keep reminding myself to watch the man, rather than his image.  Hosted - and guided - by his biographer Gareth Owen, the show highlighted Moore’s natural raconteur abilities and his astonishing memory for names and places.  I read his wonderful autobiography a couple of years ago and there were even new bits for me, as he discussed his childhood, his early career and the moves to and from Hollywood.  After an interval, he discussed “The Persuaders” and Bond (and we were treated to "My name is Bond, James Bond" which got a round of applause), took some (pretty good) questions from the audience and ended the evening talking about his work for Unicef.

An evening with a genuine Hollywood legend, filled with wonderfully told anecdotes and a wicked sense of humour, this was a real treat.  If he tours again, we’re going!