In a new edition of the occasional series, I want to tell you about a book that I've read and loved, which I think adds to the horror genre and that I think you'll enjoy if you're a fan (especially if like pulp-style horror which is well written and heartfelt). 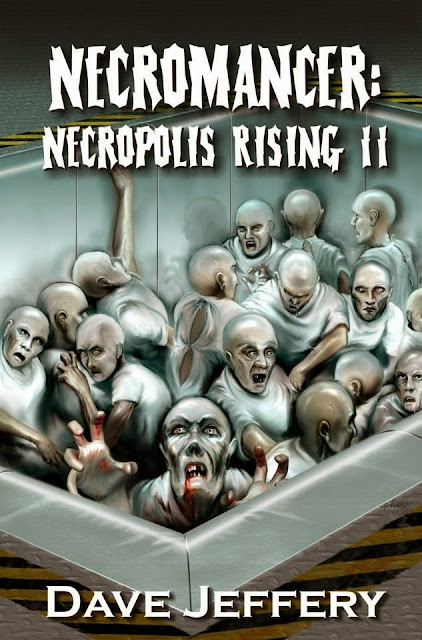 The Lazarus Initiative was meant to be finished. The research lost, the terrible creatures it created, destroyed. A city was wiped out to make sure of it.

But its legacy lives on.

Deep in the belly of the super tanker Ulysses, a scientific city seeks to recreate the project that brings its unwitting subjects back from the dead. Corralled in a steel pit, The Risen wait for the sign from their Necromancer, a master who is thought to have died with the science that made him.

Then, one night, The Risen hear his call ...

Opening with a bang, as two people succumb to ‘something’ in wonderfully gory ways, this picks up some time after the events of the first book (the excellent ‘Necropolis Rising’) that left Birmingham a walled city, following the experiments of Dr James Whittington whose Lazarus Initiative aimed to create and control zombies.  He died in the blast that wiped the city but his experiment, a young man named Thom, survived and he’s now a Necromancer, capable of communicating with the dead.  He and two ex-soldiers, Suze & Gaz, are holed up in Wyoming, trying to stay under the radar of Phoenix Industries, who funded Whittington originally.  They now have his daughter, Dr Barbara Cope, working for them, in a well funded zombie laboratory on a huge oil tanker called the Ulysses.

I was a big fan of the original, which mixed brisk writing with good pulpy horror and thrills and it’s a delight to return to the universe and find the writer producing stronger work.  Whilst this does still have those 70s-throwback rock-‘em/shock-‘em sequences, there’s more at stake here with the richly written characters suffering at every conceivable step of the way.  The Thom story-line is gripping from the off, as the claustrophobia sinks in before moving through the wide open spaces of Wyoming to Miss Molly’s diner.  There, in a tautly written and prolonged sequence, they and the diner patrons have a deadly encounter with a Phoenix Industries funded five-person SWAT-type force, all armed to the teeth.  The action is brutal, the characterisation just right and the atmosphere is detailed and concise - you can see the diner and its furniture and feel the dust on your face as the characters walk around.  The parallel storyline, as Cope conducts her experiments, revels in the claustrophobia of the ship location, in the middle of the ocean, with a zombie army gathering in the hold.  It’s this section which features some of the best writing, as two characters - manager Harding and security chief Boyce - are forced to hide their love for one another, whilst the observance of such leads to the spectacular climax.

Moving at a cracking pace and never once letting up, this is filled with characters you quickly care about and it’s safe to say that nobody comes out of the chaos unscathed in one way or another.  The zombie action is minimal but it works better for that, the sequences where they’re on the rampage being brutal and brisk, whilst The Risen’s ability to retain information is well explored.  Beyond all this, Jeffery knows how to write action and his major set pieces are all superbly staged, dragging the reader along in a tumble of incidents.

A must for fans of zombie fiction, definitely, but also for those who like their horror to be well-written good fun.  Featuring a suitably bleak ending, I really enjoyed this and would highly recommend it.
Posted by Mark West at 09:00:00