On Saturday 21st September, I achieved another milestone and attended my first Con as a guest and panellist.  I was thrilled and the fact that it was in Birmingham, which isn’t too far away from me, made me happier. 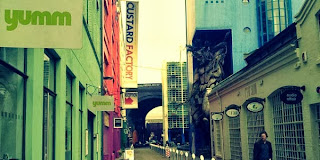 Organised by Theresa Derwin (who I originally met through the Hauntings anthology) and Fringe-Works, with assistance from Alex Davis, it was held in the Custard Factory, in Digbeth and named for the wonderful  Andromeda bookshop based in Brum (which closed a few years ago).  The owner of it, Rog Peyton, was one of the Guests Of Honour, in fact.

Thanks to emergency roadworks (a big hole just off the M6, holding up traffic aiming for the A38) and Google (bloody) maps, I didn’t actually arrive until after ten and saw Mike Chinn who pointed me to reception, where I found my old friend Steve Harris loitering outside!  I got signed in, dropped off my raffle copy of “Conjure”, said hello to Theresa and her lovely sister Tish, then bumped into Adam Nevill.  I like Adam a lot, he’s a great bloke and a terrific writer and he signed my copy of “Last Days” and also the ‘Last Days cover’ that I created which got us both into trouble with Facebook.  We’re putting the signed copy into the raffle. 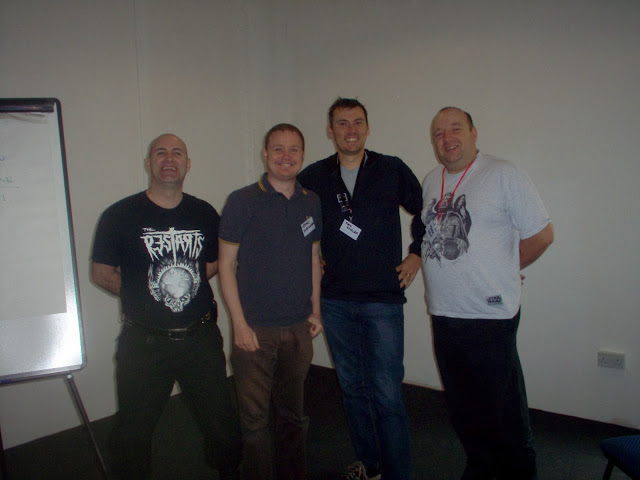 I went back outside to catch up with Steve and we met James Everington and Phil Ambler, both Facebook friends of mine though this was the first time we’d met up in person.  It was great to see them and conversations on Facebook ensured that we hit the ground running.  We trooped off to the introduction session in The Theatre, where Steve somehow managed to break his chair - he sat between James & I and after a hefty sounding crunch, he slowly dropped out of sight!  The four of us chatted and stayed on to the panel on crossing genre boundaries (which, for some reason, saw Adam shunted off to the side), which was interesting though it wandered and then went into the North Gallery for the zombie panel, which Steve was a guest on.  There we met up with Dave Jeffery and it was great to see him again and the panel went well (still not sure where Scooby Doo came from though).

Then it was lunchtime and we bumped into Ian Whates, so after I'd introduced him to everyone, he came to the Old Crown pub with us, though he only stayed for a drink and left for a prior meeting.  We stayed for food though - James & I both had a sausage fest, which was very nice but seemed to earn us some peculiar looks and Phil had a heart attack on a plate, which he demolished with ease (two burgers, no end of cheese, chips and more). 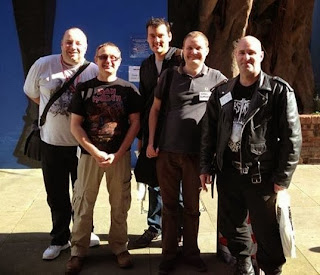 With Dave Jeffery (2nd from left)

After lunch, we had a look around the Custard Factory (which is a great old building, with plenty of nooks and crannies and some brilliant artwork around it) and then went into the “Role Of The Small Press” panel which I was on, with Simon Marshall-Jones (I handed him my signed sig sheets for the Spectral box-set, which was a weight off my mind), Jan Edwards and Adrian Middleton.  It seemed to go well and in approaching the subject from the side of the consumer, I think I held my own.  It also led to an amusing incident - we were discussing cover art and I mentioned stock photographs and used the lady from the cover of Wayne Simmons' "Flu" as the example.  "Like this?" said Phil and handed me a copy of the book that he just happened to have on him!  The panel also gave me a chance to meet and talk to K T  Davis, which was good (she & I shared space in the Anachron Press anthology “Urban Occult”). 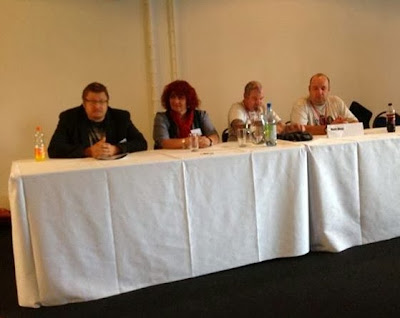 James & I went to the dealers room, which was quite small and then the five of us went to the raffle, though Dave had to leave unfortunately.  The raffle was delayed so we four suddenly found ourselves standing and chatting with Adam, pumping him for details about “House Of Small Shadows” and various other things, which was brilliant.  As I said before, he’s a genuinely nice bloke and it’s great to see him making strides towards major publishing success. 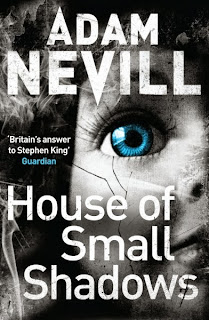 The raffle was held in The Theatre and off we trooped, studiously avoiding the row with the busted seat!  What then followed is something that I’ve only ever witnessed before, where the four of us took the raffle by storm.  Steve won enough books to fill two carrier bags, Phil had a handful (which he didn’t know how he was going to explain away, after promising he wouldn’t pick many up) and so did James & I (we were giving them away by the end of it).  I went up on stage and explained the significance of the ‘Last Days cover’ and Rog auctioned it, raising another £5 for the chosen charity (Phil ended up with it, we suggested he show that to his wife before the books…).  As for me, my key win was the paperback of “House Of Small Shadows” that Adam had given me to hold.

The four of us decided on a curry for tea and wandered up towards the Bull Ring (which wasn’t far away at all) but couldn’t find one anywhere, so we ended up in a nice little Italian, talking about our work and our plans for the future.  It was a real treat to meet up with Phil and James - and re-connect with Steve - and their friendship made the day even more special.

James had to head off then, so we said our goodbyes and wandered back, decided to avoid the ghost walk and went into “Just A Minute” but didn’t last long.  So it was, the three of us sat around the empty Custard Factory fountain, talking books and horror and plans until it was time to go and it was a lovely moment, the exact thing that Cons should be all about, to my mind.

I had a great day, especially the company I kept and the Con was good (though my one criticism would be that the venue didn’t offer up a central point for everyone to meet, which I think they’re addressing for next year).  I like the idea of a Brum con though and so I'll definitely be back for the next one!
Posted by Mark West at 09:00:00