After my marathon re-reading of the Three Investigator series from 2008 to 2010 (all the reviews are listed in this separate blog), I took a year off from them, then re-read The Mystery Of The Invisible Dog at Christmas 2012 (since it’s set at Christmas) and this year had started a re-read of my All Time Top 10.

Then I saw an email on the Yahoo group I belong to from Seth Smolinske, pointing out that 2014 is the 50th anniversary of the series first being published - he has correspondence dating from August 1963 between Robert Arthur (the series creator) and Walter Retan (the series editor) discussing the series, which can be found on his site here.

With that in mind, I think I’ll hold off until next year my planned “Nostalgic For My Childhood” post about the Three Investigators and also the remainder of my Top 10 re-read - hey, you have to celebrate these things.

In the meantime, here are some pictures of my collection. 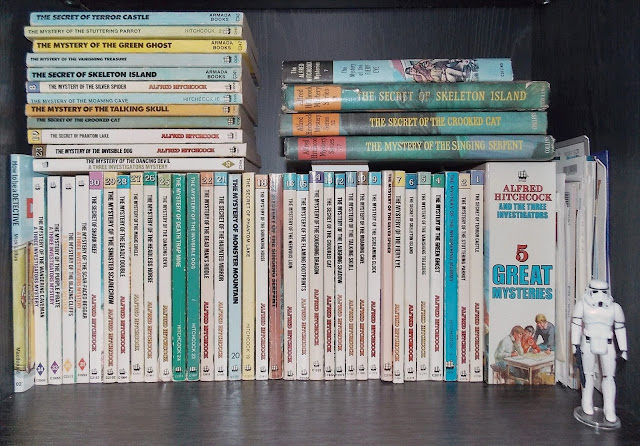 The books standing up are my 'original' first 34 (the book at the end is Whizz Kids: "How To Be A Detective" from 1979).
I got the box-set for Christmas 1981.
The paperbacks stacked up are the remaining format B paperbacks I had to get to complete my collection, plus the start of my new format A hunt.
The hardback of "Skeleton Island" is the same one I first read back in 1978, whilst the other three are recent purchases from eBay.

The first book in the series I read was “The Secret Of Skeleton Island” by Robert Arthur, which I found as a hardback in the school library.  It was 1978, I was nine and I was smitten.  I read as many of the books as I could find in the school library and the town library and, when I’d exhausted those resources, I started picking up the paperback editions (published by Armada), which were then widely available.

Since I started collecting them from 1980 onwards or so, most of my editions are the Armada format B paperback, though a small number were only ever published in format A (which stopped in 1980).  Once I’d got the first 30 (that being published in 1980, the year Alfred Hitchcock died) and the next four, I stopped collecting and my books sat on a shelf, though I didn’t go back to them too often. 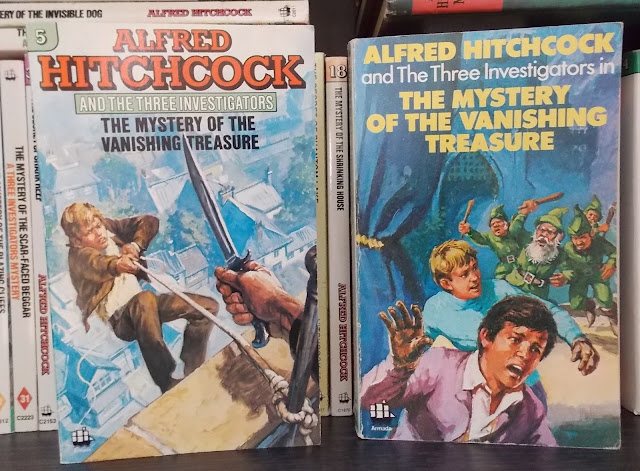 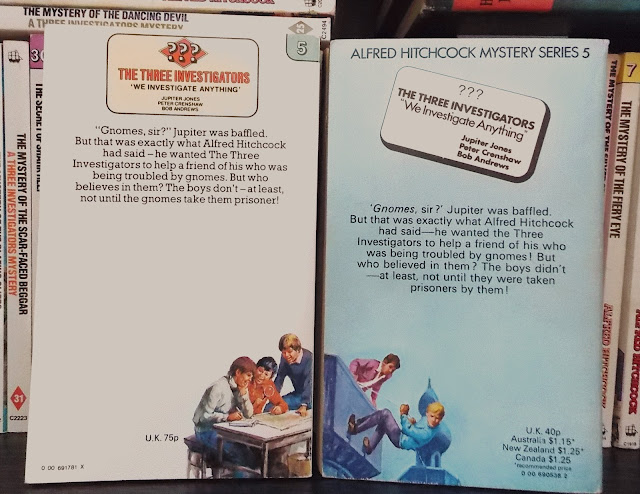 Format B on the left, A on the right.  For some reason, the later edition dropped the idea of a smaller illustration from the story, in favour of a group shot.  Note how the 'blurb' is slightly different too.  And look at those prices!
Again, these editions are the same size (my angle was off for the photograph).

At some point, around ten or twelve years ago, I suddenly got the notion that it’d be great to have my entire collection in format B - excepting the four that never appeared in it - and that meant a lot of browsing in 2nd hand bookshops and on eBay.  I did quite well and finally picked up the last title - ironically enough, “The Secret Of Skeleton Island” - in a bookshop in Leicester this year (which I detailed in this blog post).

The only thing was, once I’d found this edition - effectively achieving my ambition - I realised that I’d actually enjoyed the hunt and so, after thinking about it, I’ve started looking for the Collins hardback editions and the other format A paperbacks.  Hey, it’s a hobby - and it’s also helping to preserve the books, which otherwise might disappear altogether.  My son knows all about them (he was the one who found the format B edition in that bookshop) and the collection is right there, so perhaps he’ll read one.  If he does, I truly hope it opens his imagination as much as these wonderful books did mine, all those years ago. 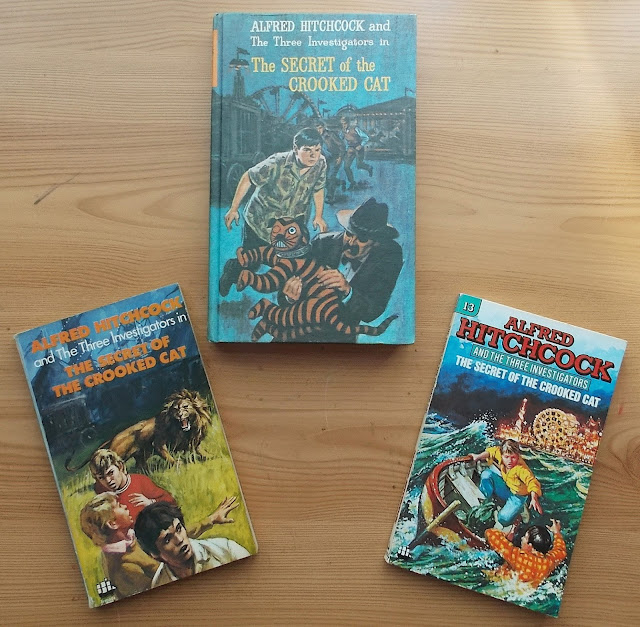 
In the meantime, if you’re interested, the following three sites are well worth checking out.

Philip Fulmer’s Three Investigator site which, amongst other treasures, has a complete run-down of the stories and the illustrations (some of which he was kind enough to allow me to use on my site)

Ian Regan’s exhaustive and comprehensive The Three Investigators: UK & Commonwealth Editions Database, which is a terrific resource (and, again, he was kind enough to allow me to use some of the scans for my site)