In a new edition of the occasional series (the last one was for Gary McMahon, which you'll find here), I want to tell you about a book that I've read and loved, which I think adds to the horror genre and that I think you'll enjoy if you're a fan.

Steve Harris (the man behind Mr Byrne) & I go back a long way, first corresponding in the late 90s when he produced a newsheet called The Inner Circle.  I didn't actually meet him for several years, finally plucking up the confidence at one FantasyCon, introducing myself with "are you the Steve Harris who did The Inner Circle?”

Since then we've developed a great friendship, which often involves us talking for hours at Cons about all things horror.  At the last FantasyCon he told me about his novel "Phoenix", which he was publishing through his own imprint PunkLit and I jumped at the chance to read it.


Vietnam 1967.
Something monstrous has risen from the ashes of war…
When the US marines enter the hidden village of Mau Giang, they unleash an ancient darkness from within its temple walls. A fearful secret kept for generations by the native Montagnard tribespeople.
Abraham Curtis travels to Vietnam to visit his sister Jenny, an aid worker in Saigon. Together they join a humanitarian convoy into the Central Highlands, where Jenny is to adopt a child orphaned by the conflict.

But the influence of the breached temple is spreading its contagion across the combat zones of Vietnam like gangrene through flesh, and soon it will destroy Bram’s world. Pursued by a bloodthirsty cult, he must search for his missing sister through the war-torn wastelands, his only companions deserters, rebel soldiers and a woman who may not be quite human.
Across the world, protestors line the streets. The battle lines are drawn - war and peace, hawk or dove. Is this the apocalyptic coming of the Man of Blood, prophesised by Nostradamus, or a delusion brought about by Post-traumatic Stress? On panic filled streets, during the Fall of Saigon, Bram will find his answer.
Forget truth. Forget innocence. There are only casualties. 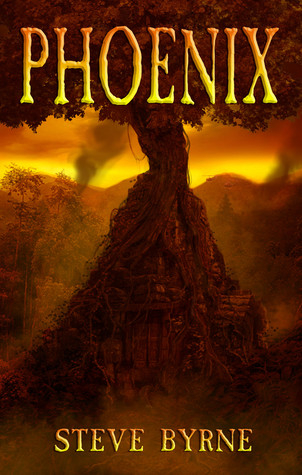 Bram Curtis is in Saigon in 1967, to visit his sister Jenny who works in an orphanage.  He’s left England, disillusioned and wants to try and find himself in this new country - listen to Hendrix, smoke pot and see what life has to offer.  When he discovers Jenny is planning to adopt a young girl called Lai, he gets roped into the aid convoy to go and reach her, headed by the urbane General Hoan.  After things take a decided turn for the worse (like Hoan himself) and Bram becomes embroiled in the Tet Offensive, the narrative jumps to May 1970 as he searches for his now-missing sister.  His pursuit leads him further in-country and into the orbit of the mysterious - and potentially dangerous - Qui, taking us up to 1975 (there’s a much later coda too), when he must finally confront the Man Of Blood, a supernatural entity that is teased throughout the novel.
Since my entire knowledge of Vietnam is limited to memories of lessons at school and movies from the 80s and 90s, this isn’t the kind of novel that I would have picked up generally but I’m glad I did in this case.  Starting with a bang and never really letting go of the pace - and it’s a long novel - Byrne relays the story of Bram, a drifter who discovers a cause that consumes his life, with real style.  Vietnam is almost a character in herself, with Saigon painted in rich and detailed depth, from the heat and humidity, the texture of skin and sweat and the hundreds of things that are happening in the streets at once, creating a riot of tactile, broiling humanity.  Later, moving in-country, you get a real sense of both the claustrophobia and humidity of the jungle, of the architecture of the churches and the battered and bruised earth, making it occasionally hard to read it’s so well done.
The book is filled with vivid characters - and this extends to the most minor of roles, not just Bram, Jen, Hoan or Qui - and yet none of them are guaranteed safe passage to the end of the novel, with some of the deaths (as quick and dirty as you’d expect in a war situation) being quite shocking.  Combine this with a dispassionate eye towards the brutality of war - what is seen and what is perpetrated - and you have a narrative that demands attention.  The supernatural elements are used sparingly but are well written and blended easily into the narrative, so you’re as unaware as the character if you’ve witnessed them or not.  Byrne doesn’t skimp on the set pieces either and there are plenty of them, all superbly constructed and choreographed, never overlong and intense enough to make you feel part of them.  The same is true of the last act, a gruelling journey Bram must take into his own heart of darkness that you can’t tear your eyes from, even down to the gut-punch final few lines.
Steve has clearly done his research in all areas - the locations, the equipment, the theatres of war, the culture and the language - and it shines through perfectly, with nothing coming across as heavy handed or expositional.  Everything the reader learns  - about Vietnam or the horrors - comes through the character, with no obvious info-dumps.
This is a wonderfully constructed novel, tightly edited and with a cracking pace and it deserves a big readership.  Highly recommended.

my review was originally posted to Goodreads
Posted by Mark West at 09:00:00