Usually, to round off a blogging year, I do a post about my creative exploits in the past twelve months but, to be honest, I didn’t feel like doing one in 2020.  It was a bad year for all of us, though not without individual rays of sunshine and as a writer, I found it stifled me for a while.  The various lockdowns also meant all Cons and gatherings I would normally attend didn’t happen and I really did miss them and my writing family (we Zoomed but it wasn't the same).
So instead, I thought I’d look back at some of my earliest creative endeavours (I was homaging Steve Austin and Star Wars back when I was 8 and 9) and here are the first four ‘novels’ I wrote (though I doubt they'd even class as novellas now).  My Dad, star that he is, dutifully read them all and gave me feedback - I’m sure he was over the moon when I started writing horror, a genre he doesn’t get on with, so he could stop being my first reader.  With their inspirations barely hidden, some wonderful cover designs (I loved Letraset!) and all bound with string, I present the ‘Early Novels of Mark West’.
Shark! (1981)
An odd combination of Jaws (naturally) and comics stories from the likes of Bullet, Crunch and Action, this features Mark West, a government salvage expert with a shark phobia whose latest job is, naturally enough, in shark infested waters.
Hadley Hall Comprehensive (1982)
A huge fan of the Robert Leeson Grange Hill novelisations, I decided to write my own, putting me and my friends into a series of adventures that were very much based in Rothwell and at Montsaye, the comprehensive I was attending at the time.  The cover is taken from a photo-story I did in 1981 (and wrote about here), featuring my Dad, me and my friend Geoff.
The Space Mercenary (1983)
It’s my take on Star Wars.
Glamourpuss (1984)
A tale of bounty hunters (lifted from The Mantracker in Crunch comic and The Fall Guy himself) tracking down a famous model, this was directly inspired by the first The A-Team novelisation by Charles Heath, which I loved (and still do).
The Three Intrepids were written in homage to The Three Investigators, a series of books I love and continue to re-read (and have written about extensively on the blog).  Eight books make up the series, written from 1983 to 1985.
* * * 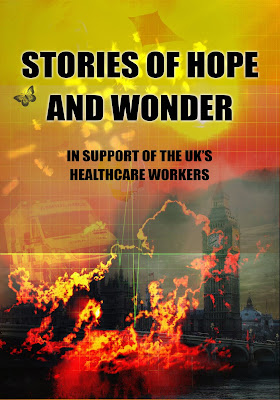 In the year itself, I had one story published, a reprint of What We Do Sometimes, Without Thinking, which appeared in STORIES OF HOPE AND WONDER, a NewCon Press anthology Ian Whates put together to raise funds for NHS frontline staff (and which has contributed over £2k so far).  I wrote about it here and you can buy the e-anthology here.
I spent the year working on my third thriller novel, after starting it in December 2019.  A “simple story” with two timelines, it turned out to be a real saviour for me, a world to escape into (after a brief 5 week period where I found it difficult to write at all) and something to creatively look forward to.  Unfortunately, the timing meant a lot of over-writing and repetition so I ended up producing a 209k word first draft!  Thankfully, I’m almost finished the second draft now and it’s down to a much more manageable and realistic 110k words.
So an odd year then but, whatever 2021 decides to throw at us, I hope you and yours stay safe and healthy.
Posted by Mark West at 09:00:00