Daisy Jones & The Six, by Taylor Jenkins Read (a review)

In a new edition of the occasional series, I want to tell you about a book I've read and loved, which I think adds to the genre (drama, in this case) and that I think you'll enjoy if you're a fan. 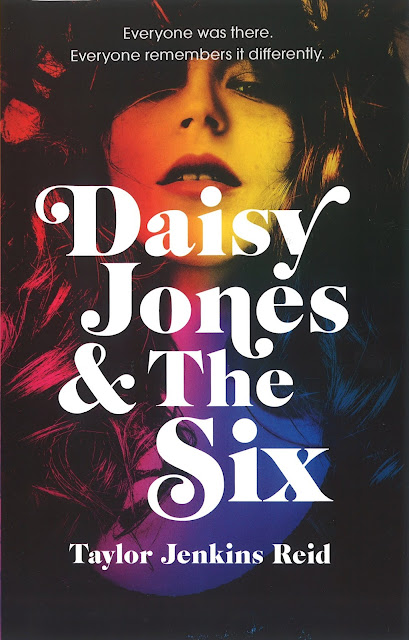 For a while, Daisy Jones & The Six were everywhere. Their albums were on every turntable, they sold out arenas from coast to coast, their sound defined an era. And then, on 12 July 1979, they split. Nobody ever knew why. Until now.

They were lovers and friends and brothers and rivals. They couldn't believe their luck, until it ran out. This is their story of the early days and the wild nights, but everyone remembers the truth differently.

The only thing they all know for sure is that from the moment Daisy Jones walked barefoot, on to the stage at the Whisky, the band were irrevocably changed. Making music is never just about the music. And sometimes it can be hard to tell where the sound stops and the feelings begin.


“Everyone was there.  Everyone remembers it differently.”

Daisy Jones is a beautiful teenager, growing up broken in 70s LA with rich parents barely aware she exists.  The Six is the band Billy Dunne has with his brother Graham, playing weddings for now but destined for much greater things.  In typical 70s style, they are enjoying life to the full - the drinks, the drugs, the parties and the girls - but Billy is in love with Camila and when the band moves West to record an album, she goes with him (and quickly becomes pregnant).  Billy gets himself straight, the band gather momentum and then Daisy, with her rich and gritty voice, joins them.

Told as an “oral history” of the band, this is laid out as a transcript and while this might initiallyseem odd (it reminded me of a lot of making-of books I’ve read), it makes absolutely perfect sense to tell the story this way.  Each character is distinct (we not only get the band, Daisy, their managers and production team, we also hear from concierge’s and the like) and some are very funny, like Warren the drummer to pops up every now and again to give his opinion on something we, the reader, know isn’t right - he didn’t see it properly because he was too busy enjoying the lifestyle.  Billy and Daisy command the bulk of the memories, but each character has his or her own story, often intermingling with the leads and all equally as gripping.  I was carried away by the atmosphere and sensibility Jenkins created, building the world around them so it’s always completely believable and throwing in plenty of lyrics (the album the band records has all its lyrics recreated at the end of the book) to help with the illusion.

Billy, struggling to stay clean and sober, wants the absolute best for his band but it’s occasionally at odds with his friends and colleagues - especially Eddie - but his love for his wife drives not only his song-writing but also the book.  Yes, this novel is about music and the 70s and chasing your dreams (and what happens sometimes when you catch them), but it’s also about love and friendship and creativity and that spoke to me all the way through.  In fact, towards the end, there’s a certain sequence (which I won’t discuss here because, well, spoilers) that brought tears to my eyes and I don’t find that happens with many books these days.  Even better, it finishes up with a “where are they now?” section, which is just the icing on the cake.

I grew up in the 70s, I like a lot of that music and I love creative people so this felt like it spoke directly to me.  Filled with terrific characters, great set pieces and ladled with atmosphere, I loved this novel and would highly recommend it.