Last Thursday, I took part in Corby Library’s first Writer Q&A evening and had a cracking time.  Held in The Lab at Corby Cube (where the library is now situated), it was organised by Ian Loveland and I was pleased to share the stage with SueMoorcroft, Louise Jensen and Darren O’Sullivan.  Joe Flavin, director of The Core, was our moderator and host. 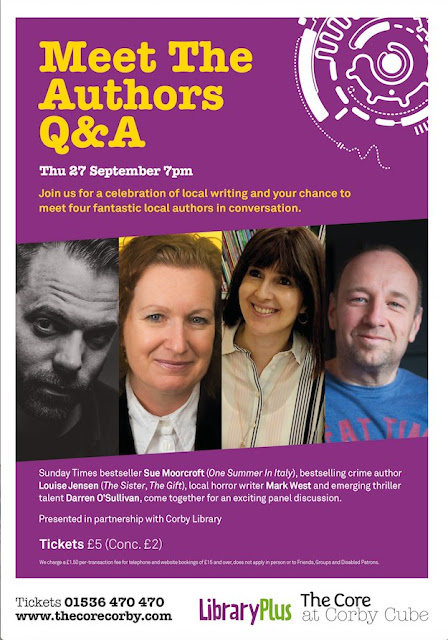 I love evenings where I get to talk about writing to people who love reading and since the event was to raise money and awareness for the library (a battle I am passionate about, serving on the team trying to save Rothwell Library), that made it all the more special.

Sue & I arrived at The Cube, made our way down to the bar and met Ian and Joe who had worked very hard for the evening - they and the four of us writers had been very active on social media covering it.  Louise and her husband Tim (who became the excellent event photographer) arrived and it was great to see them again, we caught up and chatted then headed into The Lab itself where the volunteers were busy setting things up.  I was surprised at how many tables there were (I always assume for these events that half a dozen people will turn up) and was told we’d sold over fifty tickets.  Back into the bar, Darren arrived and we finally got to meet, having only interacted on social media in the past - he was great, very positive and friendly and we had a nice chat.  My friend Darren Paterson turned up, closely followed by my old chum and creative collaborator David Roberts, with whom I go on weekly walks (with his dog Pippa) working through plot points in the thriller novel I’m currently writing. 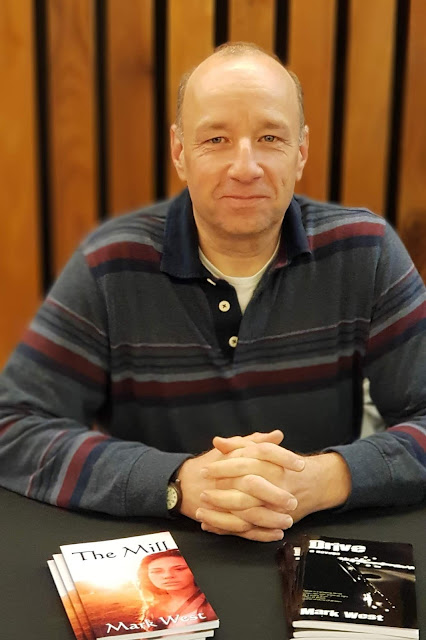 By now it was almost seven o’clock and the audience was filing in.  We made our way to the stage, got sorted, the house lights went down, the spots hit us and still people were coming in.  The tables had filled, more seats were set up at the sides and the volunteers had to stand at the back.  I later discovered we sold out the venue, with over sixty people in the audience. 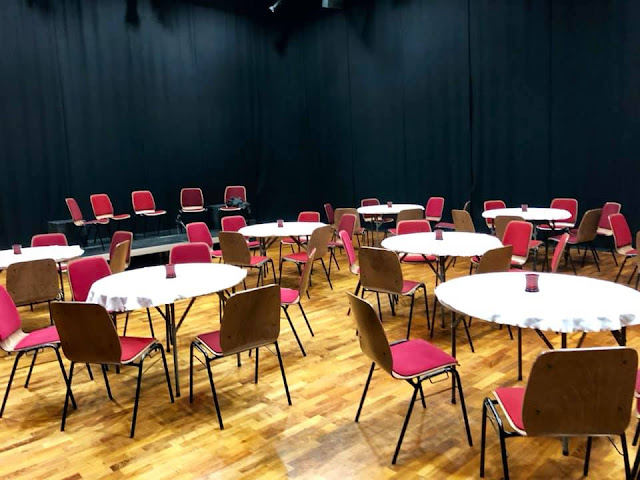 The first hour was Joe firing questions at us, keeping things moving and we four did our best to be entertaining (I think it worked), the time zipping by in a flash.  In the interval, Sue introduced me to Bella Osborne before we moved out to the bar, us writers manning the book desk and chatting to people (I also sold a nice amount of books, with Polly proving especially popular).  Signing and talking to readers is always great fun and I got to meet Claire Cochrane, who I’ve been social media friends with for years but only discovered this week - in a lovely, Facebook-degrees-of-separation way - that she not only knows my friend Caroline Ewen (part of the Golden Wonder Oldies collective who meet up for a meal every now and again) but also Lyn Thompson, who I grew up next door to!  Small world indeed.  The second half beckoned and featured more questions from Joe as well as several from the audience (some questions asked live, some written on little slips for those too shy to put their hands up).  That half’s forty-five minutes whipped by too and then it was over, but not before Darren’s inspired idea of having a group selfie with the audience involved.

Back to the bar, more chatting as people began to drift away, then a final run round thanking Ian, Joe and the volunteers (Ian gave us all a nice big box of chocolates too).  Sue, David & I then repaired to the Qube bar for a cuppa and a chat.
All in all, it was a cracking evening.  I did a similar event with Sue & Louise last year (see here for my write-up of it) and thoroughly enjoyed that but this was even better.  The four of us gelled really well, Joe moderated superbly and, crucially, the audience (a sold out sixty plus, let's not forget!) was completely engaged.  Even better, it was supporting the local library, the icing on the cake for me.

Thanks to Ian for asking, Joe for being on stage with us, the friendly crew of volunteers and, of course, the audience.

all pictures courtesy of Tim Elliston
Posted by Mark West at 09:00:00