I'm pleased to announce that The Black Room Manuscripts Volume 4, edited (and curated) by Justin Park & Tracy Fahey, is published by The Sinister Horror Company and launched at FantasyCon this weekend.  As with the other volumes in the series, it's a charity anthology and this time all money made from sales will be donated to Refuge.  Thrilled to be involved - look at that list of names on the cover! - it contains my short story Brooks Pond, a horror tale about four people at a pond in Gaffney which is said to be haunted by a witch. 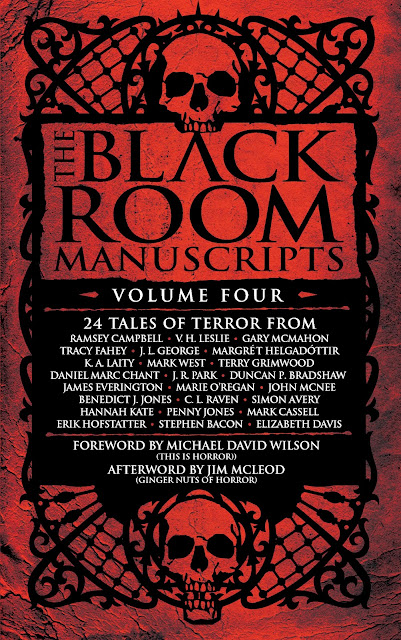 Some words are born in shadows.

Some tales told only in whispers.

Under the paper thin veneer of our sanity is a world that exists. Hidden just beyond in plain sight, waiting to consume you should you dare stray from the street-lit paths that sedate our fears.

For centuries the Black Room has stored stories of these encounters, suppressing the knowledge of the rarely seen. Protecting the civilised world from its own dark realities.

The door to the Black Room has once again swung open to unleash twenty four masterful tales of the macabre from the twisted minds of a new breed of horror author.

The Black Room holds many secrets.

Dare you enter… one final time?

That Thing I Did - Tracy Fahey

Eating The Dream - K. A. Laity

A Clear Day In A Season Of Storms - Simon Avery

Pain Has A Voice - Stephen Bacon

Swimming Out To Sea - Penny Jones

The book is available from Amazon:

This started in February with an email from Tracy Fahey, a great writer herself who also happens to be my FCon disco-buddy, inviting me to contribute a story to the anthology.  Since I hadn't written a short since August 2016 (having spent the remainder of 2016 writing The Factory and all of 2017 working on the thriller novel) and because it's always nice to be asked, I readily agreed.  That night I had the germ of an idea, which quickly fleshed itself out and, all excited, I started work on it the next day, finishing four days later on my birthday.

I thoroughly enjoyed working on the piece, especially since the process neatly fell into the 'fortnight off' I was taking from the novel.  I submitted the third draft to the NSFWG writing group and their enthusiasm for it (and some great comments) bolstered my confidence (so thanks for that, my friends).


How could I ever forget?  The was on the hill outside of town, well off the beaten track and bordered by farm fields.  It was only maybe an acre or so but incredibly dense and if you stood outside of it - as we’d done one summers day - you could see barely twenty feet into it.  Once inside the visibility was shorter, made worse by how closely the trees were packed together.  There were rumours and local legends, as always happens with places like this, but the key one concerned a witch who’d lived in a nearby shepherds cottage and lured many of the children of Gaffney to the forest where she’d performed unspeakable acts on them.
“We went one summer,” Pete said, leaning his elbows on the table and looking directly at Jody, “me, Andy here and three others and walked up and down in that forest all day.  And didn’t see anything.”
“Until it was getting dark,” I said.
Now Jody leaned forward.  “What happened?”
“We were in the middle of the forest,” said Pete, his voice dropping.  The pub noise seemed to go quieter too, even though we had this part of the bar to ourselves.  “We were all knackered, tired and thirsty and sweaty and grumpy as hell.  So we decided to head home but it got dark quick in those trees and pretty soon we were stumbling around in dusk.”
I shivered, remembering the sensation.  Simon glanced at me, nodded his head then looked back at Pete who told the story so well.  “We were disorientated, I mean it should have been really easy to find our way out, you know, it wasn’t that big.  But we couldn’t.  Then we heard someone singing.”
“Singing?” asked Jody.
“Yeah, some kind of old folk song, I’d never heard anything like it.  The five of us were shit scared, though we didn’t admit it to each other.  For some reason, we moved towards the sound and although we tried to be quiet, there was so much wood and bracken about, we made as much noise as a marching band.  But the singing carried on and we came to this weird little hollow with no trees none of us remembered seeing before and someone was in there.”
Jody’s eyes were wide.  Simon was watching Pete carefully, as if waiting for a punchline I knew would never come.