The Taste Of Her

I'm thrilled to announce that Best British Horror 2018, the first in a series of annual anthologies from NewCon Press, edited by Johnny Mains, is now available.  Along with a fantastic collection of writers, it contains my story The Taste Of Her which was originally published in my 2017 collection Things We Leave Behind.  The anthology will be officially launched at FantasyCon this coming weekend. 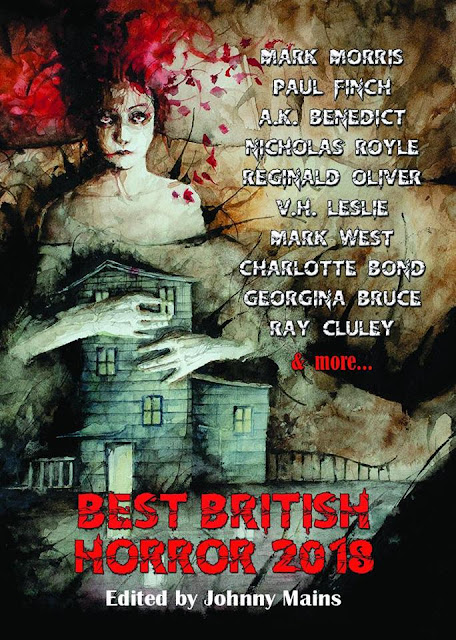 Editor Johnny Mains has scoured anthologies, magazines, and on-line publications to select the very best horror stories written by British authors. From creepingly insidious tales where the fear gathers slowly to the outright terrifying, from musty abandoned buildings to the wilds of an isolated beach, from yarns of yesterday to contemporary horrors of today: Seventeen tales showcasing British horror at its best.

In the Light of St. Ives – Ray Cluley

The Book of Dreems – Georgina Bruce

The Lies We Tell – Charlotte Bond

Tools of the Trade – Paul Finch

The Taste of Her – Mark West

A Day with the Delusionists – Reggie Oliver

We Who Sing Beneath the Ground – Mark Morris

Also available from Amazon in paperback

This was one of two original pieces in my second collection and started life as some notes I jotted down in 2000, based on an image I had of two men in a plane with the pilot asking his ex-friend how his wife tasted.  That was it, there was no ending or purpose and the story sat for a while until Ross Warren asked if I had anything new for the book.  I went back to this and it all seemed to lay itself out quite nicely, coming together quickly.  The flying business came from when Alison's dad got his pilots licence and took the pair of us up in a Cessna a few times, though each journey was much more enjoyable than the one described in the story and the rest of it, thankfully for me, is invention.

It was a real thrill when Johnny wrote to me, saying he loved the story so much he wanted to include it in his Best Of and I'm thoroughly chuffed to be included.

“So how does my wife taste?”
Startled, Ian Burgess looked at Keith March, who was piloting the Cessna aircraft they were in.  The plane banked right, high over Gaffney.  “What?”
Keith turned to face him, his smile tight.  “I asked if you liked the taste of my wife.”
Turbulence hit the little plane and Ian hoped it covered the guilty panic he knew must be showing in his face.  “I don’t know what you mean.”
“Yes you do you fucking liar.  I know everything.”
Ian had played poker with Keith a few times and knew he was a good bluffer.  But was he bluffing now?
“Ian, you’ve fucked Julie and ruined my life.”  He dipped the nose of the aircraft and checked a couple of gauges.  “So for both our sakes, don’t make it any worse by lying now.”