Nostalgic for my childhood - Look-In Magazine

In 2013 I started a thread on the blog called “Nostalgic for my childhood” (you can see a round-up at this link, or use the label), through which I planned to cover books and films and various things I remember fondly.  Here's a new entry...

Earlier this year, I joined a Facebook group for Look-In, a magazine I clearly remember enjoying from my childhood.  As I looked over the fantastic covers it occurred to me that whilst I thought I was closer to 8 or 9 when I started reading it, the earliest ones I could remember were from 1976 (when I was 7).  I can only imagine now that what drew me in was The Six Million Dollar Man which, I’ve been assured, was my absolute favourite programme on TV.  Back then, you have to remember, there wasn’t an Internet - everything you knew about TV shows and films came from whatever was on the news and Look-In changed all that.  It was designed and written for kids and it featured the major film stars, pop acts, sports people and TV stars of the day.  For me, it was worth buying because it not only had posters of Lee Majors (which went straight up on my bedroom wall), it also had a comic strip of his adventures plus occasional behind the scenes articles (on stunts, special effects and what Majors was doing next).  In fact, thinking about it, maybe it’s Look-In that’s responsible for my enjoyment of behind-the-scenes articles! 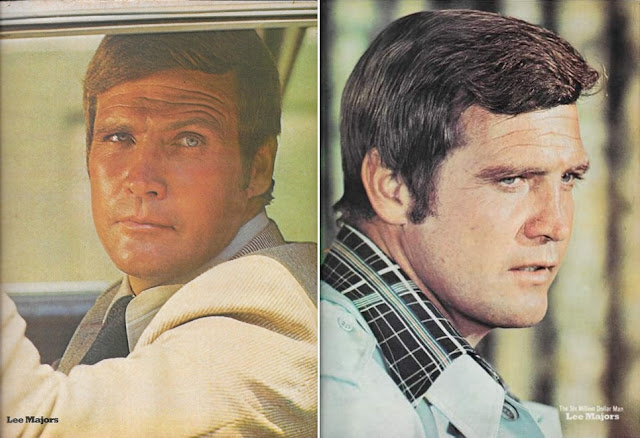 Look-In magazine was launched on 9th January 1971 by Independent Television Publications Ltd.  Subtitled ‘The Junior TV Times’ (one of two major listing magazines at the times, The TV Times concentrated on the ITV network and Radio Times took care of the BBC), it shared the design and format (glossy paper, colour covers) of its parent, though only ran to 24 pages.
At the time, falling sales of comics were being partly blamed on high quality childrens TV and early evening light entertainment programmes then available.  To combat this, it was decided to introduce a magazine that would capture children’s interest with features on television itself - the programmes, stars and behind-the-scenes production facts.  Since it was being published by ITV, the strips and features could only be based on the networks show which wasn’t a problem, since the 1970s was a fertile period for children’s television.
The job of editing Look-In fell to Alan Fennell, a successful scritptwriter for various Gerry Anderson TV shows (including Thunderbirds and Stingray) and a respected comics editor - he created the extremely popular TV Century 21, from which he took a core creative team.  Angus Allan, a prolific writer and editor was, for periods during his Look-In tenure, responsible for scripting every strip in the magazine, including The Six Million Dollar Man, Logan's Run, Charlie's Angels and Danger Mouse.  Away from Look-In, he edited Marty (the first photo-strip teenage romance weekly) and wrote several Garth adventures for the Daily Mirror.

Mike Noble had built a solid career as an artist during the 1950s and his ability to draw realistic animals saw him work on the Follyfoot and The Adventures Of Black Beauty strips though he was apparently most happy when asked to draw the Worzel Gummidge strip.  He also contributed to Kung Fu, The Tomorrow People, Space: 1999, The Man From Atlantis, The Famous Five, Star Fleet and Robin Of Sherwood.  John M Burns was a respected artist and following his work on Look-In, he moved to 2000AD and began working on Judge Dredd, a strip he still contributes to.  Martin Asbury joined Look-In to work on Kung Fu in 1974, though he’s perhaps best remembered for The Six Million Dollar Man.  He also drew a Star Wars strip for the TV Times in October 1982 when the film debuted on ITV.  Asbury took over the Garth strip when Frank Bellamy died in 1976, drawing it until it finished in 1997 and in 1984 he began to work as a film storyboard artist on Greystoke: The Legend Of Tarzan, Lord Of The Apes  In all, a lot of major British comic talent worked on the magazine over the years, including Arthur Ranson, Harry North, Colin Wyatt, John Bolton, Jim Baikie, Phil Gascoine, Barry Mitchell, and Bill Titcombe.

When Fennell left in 1975, the-then art editor, Colin Shelbourn, took over as editor and stayed in the position until 1992.  Although he made minimal changes to the magazine’s direction in the 1970s, in the 1980s he took a strong view on violence and made Angus Allan write his action strips with few or no weapons and as little fighting as possible.
The first issue included strips based on popular shows of the time, such as Please Sir!, Freewheelers and Timeslip (none of which I remember).  There were also features on World Of Sport and Survival, both of which I do remember - the former was a sports round-up on a Saturday afternoon with Dickie Davies that I recall primarily for people typing in the  background and the wrestling coverage; the latter a natural history programme I remember dragging by on a Monday evening.
For me, Look-In opened the door to a lot of different things and, looking back, it does seem to have been one of the few publications with its finger on the pulse of popular culture at the time.  Through it I remember discovering about skateboarding, Star Wars, BMX bikes, computers, new Bond films, Return Of The Saint and Blondie.  The music coverage was extensive and although it obviously focussed on the biggest acts of the time - such as ABBA for the period I remember most clearly, 1978 through to 1980 or so - it also shone the light on smaller bands, paying particular attention to British ones.  The Bay City Rollers, in the earlier issues I was aware of, were also widely covered.
Sport was taken care of by On The Ball with Brian Moore and Peter Fairley contributed science material.  DJ Ed Stewart, who appeared in the first issue with a feature on a day in his life, was given his own two-page spread called ‘Stewpot’s Newsdesk’ which covered everything from funny pet pictures, requests for penpals, book and album reviews and news on upcoming films.  The feature ran until 1980.
Perhaps through editor Fennell’s connection with Gerry Anderson, a feature dedicated to him and his work, “The Worlds Of Gerry Anderson” was introduced in 1975.  I loved this - I was a big fan of Captain Scarlet and Thunderbirds - and eagerly read articles about special effects, models and puppets, whilst avidly looking at the photographs accompanying each piece.  It was through this spot I first heard of Star Wars, as it happens.  The feature ended in April 1978.
Although The Six Million Dollar Man TV show finished in 1978 (I can’t imagine I was too happy about that), Look-In teamed Steve Austin up with The Bionic Woman in a new strip in 1979 called Bionic Action, which was drawn by Ian Gibson (who went on to create Halo Jones for 2000AD).  I have no memory of this whatsoever so I assume my attention had wandered by then.

In keeping with the TV Times, Look-In featured listings for each ITV region, highlighting programmes likely to appeal to its target audience.  It seems primitive now but at the time there were only three TV channels - BBC1, BBC2 and ITV - and seeing all those different logos was exciting, especially the ones - LWT, ATV and Thames, especially - which preceeded some of my favourite TV shows of the time.  The TV regions covered (and if you’re of a similar age to me, this list might induce some pleasant nostalgic warmth) were Granada, Tyne Tees, Southern, Anglia, Border, Channel, Grampian, Scottish, HTV, LWT, Thames, ATV, Ulster and Yorkshire.  The format of these remained largely the same during the 70s but when the magazine format changed in the 80s, it was merged into “Switch On!” which also contained detailed features on some of the weeks programmes and a letters section.

Look-In originally featured photo-based covers (often taken especially for the magazine) but these were replaced with striking painted covers that must have made the magazine stand out from the shelves of the newsagent.

These were mainly produced using acrylics by Arnaldo Putzu, an Italian artist working in London who created cinema posters in the 1960’s including ones for Morecombe & Wise (The Magnificent Two and That Riviera Touch), Hammer (Creatures the World Forgot and The Legend of the Seven Golden Vampires), the Carry On series and Get Carter.  Though other artists sometimes contributed, his cover reign ran from 1973 through to 1981.

In September 1981, the look of the magazine was revamped with a new logo and photo-based covers.  It was still a popular title but with the anti-violence stance, action strips were sanitised or dropped to make way for more child friendly fare such as Danger Mouse and Scooby-Doo.  I think I read it until 1982 or so (I remember the issue with the 3D glasses as a free-cover-gift and coverage of ET: The Extra Terrestrial) and didn’t really miss it when I stopped.  Sales dropped further as the 80s wore on and Look-In struggled to compete with glossier teen magazines of the time (such as Smash Hits).

By the 1990s it was catering for a younger audience, focussing less on comic strips and more on features and posters.  The magazines popularity waned quickly and the last issue, with Mark Owen of Take That on the cover, was published on 12th March 1994.

In addition to the weekly issues, Look-In also published twenty annuals (dated between 1971 and 1991) and a Summer Special each year.

In 2007, Carlton Books published “Look-In: Best Of The Seventies”, a hardback compilation reprint that did well enough to be followed up the next year by “Best Of The Eighties”.  I picked up the first reprint and really enjoyed it but decided not to bother with the 80s one.  Re-reading those old strips was a pleasant experience - they were well crafted and drawn - and there was also a lovely nostalgic rush to them.

I understand progress and generally embrace the digital age and social media, but I also wish there was still room for something like Look-In - or am I just being wistful?

A “selected” list of strips that appeared in the magazine can be found on Wikipedia (here) but these are the key ones I recall (and clearly mark out the generation of reader I was):