It's almost Halloween, when all the ghosts and ghouls come calling (usually for chocolate), when the evenings are dark and the air smells of woodsmoke and the thoughts of us all turn to the idea of watching or reading something scary and creepy. 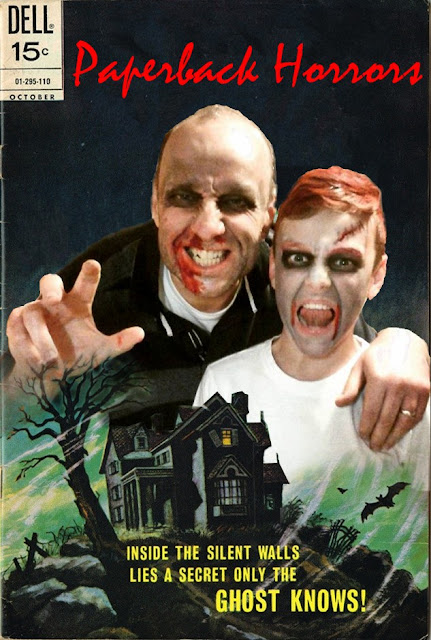 For my fourth Halloween post (previously I wrote about VHS cover art, behind the scenes special effects shots and Top Trumps), I've decided to stick with something I love, the cracking paperback covers of the 70s and 80s.  One of the blogs I follow is Will Errickson's Too Much Horror Fiction, where he posts some cracking scans (I've tracked down a few of the books because of them) and in a nice twist, he sought out The Happy Man based on my post about the Eric Higgs novel.  Looking at those old covers reminds me of being a young horror reader in the 80s when there was so much reading waiting for me to discover (along with the awful realisation that sometimes the artwork was the best thing about the whole book) and so much to be enjoyed.

These fit perfectly into my occasional Old School Paperbacks thread, blogs celebrating those cheesy, sleazy old-school pulp paperbacks from the 70s and 80s, which are now mostly forgotten .  They might not be great art, certainly, but they have their place - for better or worse - in the genre and I think they deserve to be remembered.

So with that in mind, enjoy this Halloween treat of covers that (on occasion) promise far more than they deliver...
I first encountered this book at my cousin's - the back copy, amongst the film credits, calls Rick Baker 'the master of them all' for his make-up effects.

This promises everything, doesn't it - ravening, gut-chilling worm-power (what the hell is worm power?).  As it is, I read this earlier in the year and enjoyed it well enough (you can read my review at Goodreads here).  And  in a nice touch, even though the technology didn't exist when this was designed, if you scroll up the screen with your mouse roller, the title text seems to wiggle.

My Dad had this edition on his bookshelf and it scared the living daylights out of me.  A few years later, around about the time the first Evil Dead film was being banned in the UK, someone at school mentioned how gruesome this book was and so, of course, a bunch of us read it.  As I recall, the scene in the school was considered the worst (we were all about 12 or 13 at the time) but, as an adult, I found the suicide at sea sequence much more disturbing.

There is so much to enjoy about this - the font, the blurb, the woman, the horns, that skull.  Genius.

Brings new meaning to the term "chained to the photocopier..."

Mr Johnson was obviously on a winning streak, though this cover's not a patch on The Succubus, but I do love the way NEL have re-defined the word Homunculus (the Oxford English dictionary says it's 'a microscopic but fully formed human being from which a fetus was formerly believed to develop').
I'm not entirely sure how this glorious cover (the screaming woman is lifted from the poster of the 1981 shocker Nightmares In A Damaged Brain) reflects a novel about killer jellyfish but I've read it (and blogged about it here) and quite enjoyed it.

Is it just me, or did you look at this picture and hear that little Bill And Ted air-guitar-riff?

Peter Tremayne is apparently the fiction writing pseudonym of the Celtic scholar and author Peter Berresford Ellis.  The hardback edition (which I can't find a decent scan of, unfortunately) features a lifted image from The Texas Chainsaw Massacre.

This might well be a terrific novel (Kirkus reviews seemed to like it) but I think Village Voice might be overplaying their hand here.  As an aside, Campbell Black wrote the original novelisation for Raiders Of The Lost Ark in 1981 and The Intruder, which I blogged about here.

I'm not sure how it took three people to write this (Bischoff is a noted sci-fi novelist and scriptwriter) but it sounds like fun.  Here's the blurb - A college professor of medieval literature, drunk and desperate to liven up a dull party, performs a demon-summoning ritual, which, unexpectedly, succeeds. The demon, a four thousand year old half-human female, proves more alluring and mischievous than the professor anticipates, and proceeds to turn his life upside down.


I reviewed this slim novel in an earlier blog post, which you can find here and liked it a lot.

This is the kind of kiss where, in later years, they reminisce and laugh, saying "remember that time our teeth clashed?"

John Halkin is, apparently, the pseudonym of an unknown British author who's most famous for writing the 80s "slimy" trilogy - Slime, Slither and Squelch - none of which I've managed to find reasonably priced copies for.  All look like cheesy fun as, indeed, is this one.  I read it earlier this year and you can find my review at Goodreads here.  The US had an alternate cover, which Will posted, though I prefer the UK one.

A skull, shark teeth, some kind of weird eye - seriously, what's not to like?

I love this cover and I think that's because the thing we initially think is the monster with a screwed up face might, in fact, just be a person who's been startled by the monster grabbing their shoulders from behind!

Published in 1994 (but an honorary 80s cover, I'm sure you'll agree), this must have caught the tail end of the horror boom.  I first saw this on TMHF and managed to track down a copy (for much less than I thought) through Amazon US - I mean, what a fantastic cover (by Joe DeVito).


* Thanks to Will for the use of his scans