It's Halloween, when all the ghosts and ghouls come calling (usually for chocolate), when the evenings are dark and the air smells of woodsmoke and the thoughts of us all turn to the idea of watching or reading something scary and creepy. 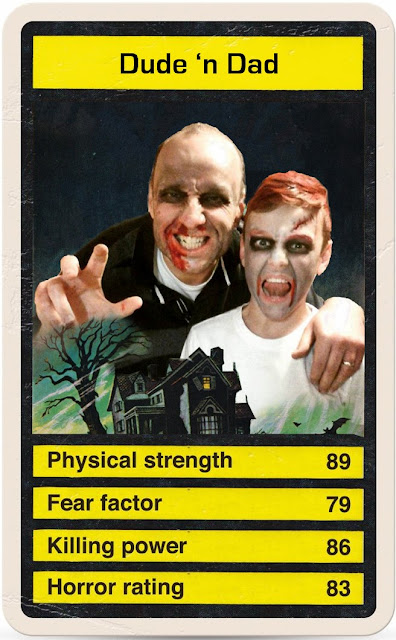 For my third Halloween post (previously I wrote about VHS cover art and behind the scenes special effects shots), I've decided to highlight something that makes perfect sense (especially to monster loving kids, as I was) but also makes you wonder how they got away with it.

Top Trumps, launched in 1977 by a company called Dubreq (who also made the Stylophone), was a hugely popular children’s game in the UK particularly with kids who delighted in the statistical nature of it.  There were eleven different packs initially, each featuring 32 playing cards, themed around cars, sports stars, planes and military hardware amongst others, highly collectible and pocket-money-priced at 50p.  Eight at the time, I was an avid fan and one of my favourites was the Horror pack. 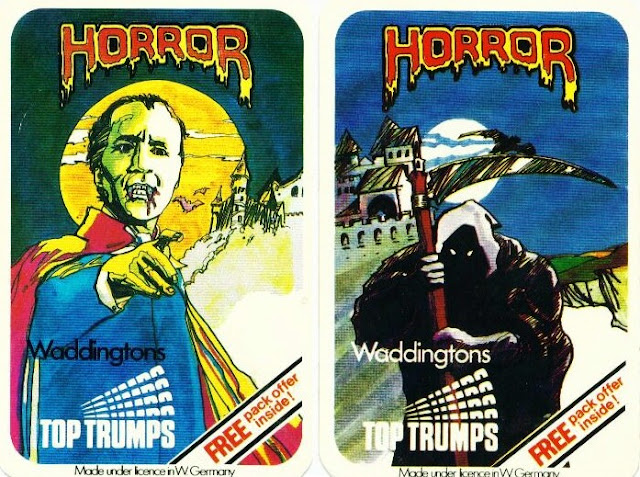 In fact, there were two versions, Dracula (the one I had) and Devil Priest (can you imagine a kids toy being sold under that name today?), which appeared in 1978.  Apparently the origins of the sets are shrouded in mystery - no-one seems to know who devised them, or created the bizarre artwork - and while they're put together in a slightly slapdash fashion, I like to think whoever was involved had a great deal of fun with the project.

Some of the stats make little sense (how can Death only have a Killing Power of 95?), some of the drawings even less so (why is The Phantom Of The Opera represented by The Abominable Dr Phibes, when he appears on two other cards) but to me that just adds to the delirious charm.  Some pictures are clearly lifted from films (how on earth did they get away with that?), others are epics of invention (Granite Man, anyone, or how about Circus Of Death), some are puzzling (why is Godzilla wearing a shirt and bow-tie?) while others, like the Zetan Warlord, just make you smile.  The scoring is also highly eccentric - King Kong understandably scores 100 on Physical Strength but his Horror Rating of 70 is beaten by the (much smaller and, to my mind, less horrific) Two-Headed-Monster who rates an 89.
Full of “gleeful crudity and unashamed gore”, these were the ideal accompaniment to Denis Giffords’ A Pictorial History Of Horror Movies, a seminal rite-of-passage for horror fans of a certain age.  My original set, much loved and played with, is long since lost but I picked up one of the Waddingtons re-issues recently and shared a thoroughly enjoyable hour with Dude playing it (he had as much fun as I did, even if he’s not a monster kid like I was).
Just in case Top Trumps passed you by, the rules were very simple.  Each game consisted of several players (2 to however many you wanted) being dealt a hand, one picking a statistic to compare and whoever won (ie, they had Dracula and played the Horror Rating - his was 100), collected the other cards in the round and went again.  The game continued until one player held all the cards.
Dubreq was taken over by Waddingtons in 1982 and the popularity of Top Trumps continues to the present day.

As for us, Dude & I will be settling down for a game of this (the perfect Halloween activity) and I’m thoroughly looking forward to it.  I just hope I get Dracula and King Kong in my first hand... 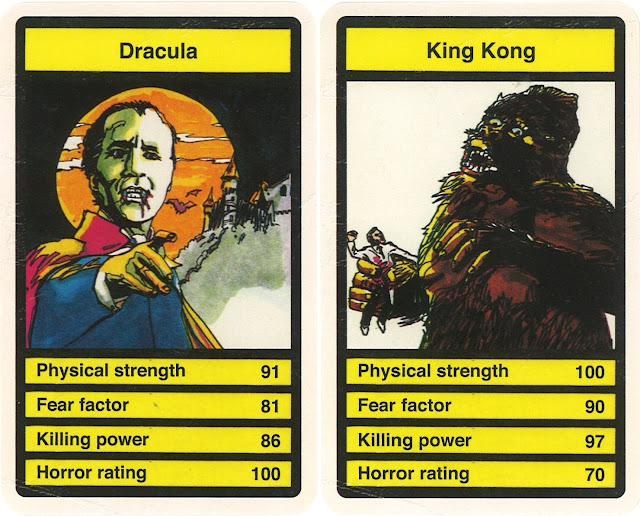 with thanks to Hypnogoria for some of the history
Posted by Mark West at 09:00:00