The Order Of Aries

I'm pleased to announce that The Thirteen Signs, edited by Dean M. Drinkel, was published by Nocturnicorn Books whilst the blog was on holiday.  It marks the seventh time I've worked with Dean and my story, The Order Of Aries, is the fourth adventure for my recurring character Mike Decker (who also appeared in The Zabriskie Grimoire, The Penthouse Incident and This Is The Colour Of Blood) 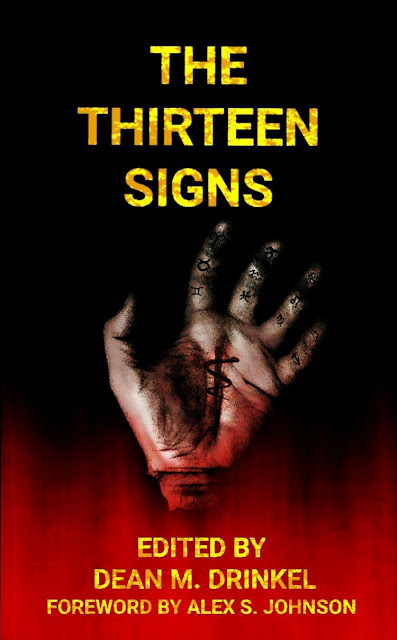 The Order Of Aries, by Mark West

Seven For Eight, by Romain Collier

Solomon Carson And The Death Of A Virgin, by Trevor Kennedy & Robert E. Tate

The Scorpion Dance, by Amelia Mangan

One in Twelve, by Steve Byrne

A Sorrow Of Sweet Pipings, by Jan Edwards


The book is available from Amazon UK

I enjoy writing the Decker stories but felt that, in keeping with the pattern they'd developed, I'd allowed them to become a bit 'flashier' than they should be, so decided to go back to basics and write a mean and dirty little tale.  Having said that, Decker does get to enjoy himself as he describes what he does: "I am an acquirer, a finder of items lost or hidden and although it’s an occasionally dirty job, I am well paid for it.  I take my job very seriously and I expect other people to do the same.  I once had a meeting with a smug CEO of a social media company who compared me to a personal shopper and I’d punched him in the face before he could laugh."

Dean approached me last December and, when I agreed to be involved, assigned me the Aries starsign.  I don't pay much attention to astrology (and I'm an Aquarius anyway) so I looked the sign up, found it was most readily associated with a goat and had the key image before I got home that night.  A few days later, Dean & I were talking and he mentioned it might be nice to see another Decker story and that sealed it.

As I mentioned before, I've made some changes to the Decker blueprint (especially having him eat at a burger van at the start), removing the black comedy that ran through Blood and making the character suffer badly when he's tortured at one point (in what is, hopefully, a grim little sequence).

The Order of Aries made its headquarters in a nondescript 70s semi-detached, located in a quiet cul-de-sac on a large housing estate.  It was three hours since I’d been to see Maddie when I parked across the road and turned the engine off.

It was quiet.  There were no pedestrians, no dogs barking and very few cars parked on driveways.  I wondered how many of the net curtains would be twitching with my arrival.

I got out and crossed the road, heading for the house.  The front garden had been paved over and there were oil splashes on it, as if people used it for parking.  A driveway ran up the side of the house towards the garage, dotted with more oil splashes.  The house was double-glazed, the plastic frames sun-bleached but tidy and curtains were drawn at all of the windows I could see.  The front door had two panels of frosted glass and through them I could make out the shape of a coat rack but nothing else.  I tried the door handle but it didn’t move.  I took the multi-tool out of my pocket, selected a blade and inserted it into the lock and then I was in.

The hallway was cluttered.  A staircase ran up to my left and, across the way, was an open door. Alongside the stairs, a narrow corridor led to a kitchen.  The house was silent and smelled of curry.  I went through the open doorway into a lounge, which had a sofa and two chairs, a large TV and a games unit.  Several pizza boxes were littered around and other detritus it was difficult to see in the poor light.  Over the fireplace, on the wide chimney breast, was a large painting and it took me a moment or two to recognise it as Goya’s ‘El Gran Cabrón’. or ‘The Great He-Goat’.  The lounge and dining room had been knocked into one and I turned to the back of the house where a big dinner table commanded the space.  It was covered in papers and several closed laptops and on the cupboard behind it were several large monitors, which must have been at least ten years old and a cardboard box full of keyboards.  I went through to the kitchen and every surface I could see was covered in piles of papers, even the hob.  I opened the fridge and saw a large cake box, three 4-pint containers of milk, a lot of cheese, two packs of butter and two pizzas.  The whole thing stank of meat.

Closing the fridge I noticed another door, pushed it open and stepped into an empty garage.  In the middle of the floor was a large trapdoor with a big ring pull on it, which seemed very out of place.  I wasn’t aware of any houses of this era having cellars.  I pulled it open and heard the hush of seals coming apart then the scent of rotting meat hit me like a slap.  I could hear a murmur of voices but not what they were saying.  I pulled the door up and over to the side, laying it carefully.  A stairwell went down, simply built and enclosed by a studded wall.

The voices were still talking, so I assumed they hadn’t heard me and I went down the steps slowly.  Birds had been nailed to the exposed beams, crows and pigeons mostly and while the ones nearest the entrance were clearly fresh, the last couple were dessicated.  I paused on the bottom step, trying to get a fix on where the voices were.  Ahead, the cellar wall had been plastered over but it was coming away in places, revealing the dark earth behind it.  I couldn’t help thinking that all of this had been excavated recently.

I decided the voices were to my left and risked a quick glance around the plasterboard.  The cellar stretched further than I’d been expecting, almost as if they’d gone under next door too.  There were a dozen or more support posts, some of which blocked my view, but I could see three people standing around something with their backs to me.  I couldn’t see what they were looking at and decided I wanted to.