The third in an occasional thread of blog posts celebrating those cheesy, sleazy old-school pulp paperbacks from the 70s and 80s, which are now mostly forgotten.  Yes, we’re not talking great art here but these books have their place - for better or worse - in the genre and I think they deserve to be remembered.

On this occasion, I'll acknowledge the elephant in the room that you find with any kind of pulp entertainment.  Sometimes the "thing" (a book, a film, an old TV show) just isn't very good at all but still, there's something about it that draws you in and keeps you reading or watching.  Sometimes, it has to be said, they're bad but, in a way, they still have their own kind of dopey charm. 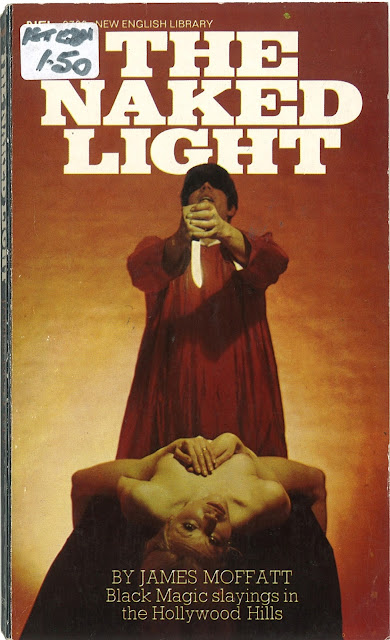 A Satanic coven meets on the affluent slopes of Beverley (sic) Hills.  The participants in the abominable rites are the biggest names in Hollywood.

The police attempt to solve the enigma of the multiple murder - through a maze of black magic, torture and sudden death.  An appalling exposure of the soft underside of Hollywood.

Following a Black Mass ceremony-cum-orgy, Hollywood starlet Chloe Young is brutally murdered and the studio she’s contracted too - Mermaid Films - is worried because they have a couple of her films waiting release.  They task ace publicist Lucy Christian with finding out the truth whilst trying to cover up the darker aspects of Young’s life to make her palatable for the movie-going public again.

Well, this is a genuinely odd little book (126 pages, small type).  A real pulp paperback obviously ripped from the headlines (the Manson Murders were in late 1969), this seems to have the misfortune of being saddled with a writer who clearly wishes he was writing something else.  Lucy is the main character, though there are chunks of the book where she doesn’t appear, a 33-year-old single girl (mentioned on several occasions), who’s very moral but also a bit wanton, not at all religious though she carries a cross (and during one discussion of abnormal sexuality gets strength from the ‘old-fashioned Gospel’) and an apparent nymphomanical prude - no, it didn’t make much sense to me either but that’s how Moffatt tells it.  And Lucy is easily the most sympathetic character (and she’s not at all, on occasion).

Cynically constructed (Moffatt clearly believes in the ‘give the public what they want’ school of thought), he uses the text to extol his apparent dislike of modern Hollywood, the looseness of the women around it (whilst never missing a chance to mention jutting breasts and pubic hair), hippies, promiscuity and gay people (a gossip-radio-DJ called Mish-Mash comes in for some appalling abuse from the writer, the other characters seem to tolerate him okay), whilst telling a confusing tale that takes in ex-pat Brit movie stars, hoodlums, hookers, drug dealers and a poet who isn’t what he appears to be.  Add into the mix a skirt-chasing police Captain who actually (I swear I’m not making this up) offers to adopt a child who’s given him some clues to the case (in the worst, syrupy, TV-movie-of-the-week style) and more refernces to the Salem witch trials than you can shake a stick at and the book becomes something I’m certain Moffatt never intended it to be.  I also have no idea what the title refers to.

Arguably, you could say this is a product of its time (it was published in 1970) but equally you could argue that it’s badly written and contains pretty much every “-thropic” tendency you can think of, but it’s so formless, so wonderfully delirious, that it almost redeems itself.  This isn’t a good book and I can’t imagine ever reading anything else Moffatt wrote, but I did quite enjoy this for all its sins.  Not sure who I’d ever recommend it to though.

(on a side note, I was amused that the back cover blurb tells you a "Mafia Killer" dunnit, then has the police get mixed up in all kinds of things, whilst concluding that it's an appalling exposure - is that the book, or what it exposes?  They genuinely don't make them like this any more...) 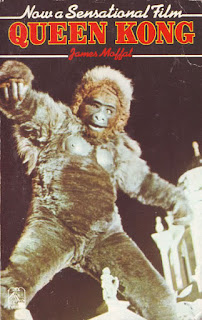 James Moffatt was born on 27th January 1922 in Canada and died on November 8th 1993 in England.  He is reported to have written at least 290 novels, in several genres, under at least 45 pseudonyms.  Since he was so prolific, New English Library asked him, in 1970, to write a book about the skinhead subculture and after that novel (called "Skinhead") sold one million copies, he wrote a further seventeen in the series.  He continued to churn out pulps for NEL during the Seventies and in 1977 wrote the novelisation for "Queen Kong" (a spoof British film starring Robin Askwith), as well as writing for children's annuals.  He didn't publish after 1980, which may have been due to his alcoholism.

During an episode of BBC2's Late Night Line Up in 1972,he was challenged to write a novel in a week and seven days later, he appeared on the show again with the completed manuscript of "The Marathon Murder".  Although he was only given a loose outline on the TV show, it's alleged that the novel had been written prior to his appearance, allowing the publishers to strike while the iron was hot and get the book into the shops (it failed to find a readership).