As a fan of movie special effects, especially miniatures (as I’ve blogged about here, here and here) and also the James Bond series, I thought it might be interesting to do a post on the model work from Bond films.  I wrote an appreciation of Derek Meddings last year (which you can read here) but I thought, for a start, that I’d highlight the contributions of John Richardson.

John Richardson was born in 1946 in London and his father, Cliff Richardson, was one of the special effects pioneers in England - he started his career in 1921 with the Stoll Picture Company’s “Grand Guignal” series, before going on to work with Alfred Hitchcock at Elstree and later running the effects department at Ealing Studios.  When John was 14, he went to Israel as Cliff was working on “Exodus”, got a job on the crew and served his apprenticeship through the 1960s, branching out on his own with “Duffy” in 1968.  He won an Oscar for his work on “Aliens” (1987) and was nominated for “Cliffhanger” (1993), “Starship Troopers” (1997) and three of the Harry Potter films.

The aircraft hanger, in the pre-credits sequence, was a combination of full-size, shot at RAF Northolt in 311 Hanger featuring foreground miniatures and a large-scale miniature built at Pinewood.  Bond, in the Acrostar jet, is being pursued by a heat-seeking missile and flies through the hanger he was trying to blow up, even as the enemy try to close the doors...

John Glen explained the shot in interview - "The plane is on wires and we're using a foreground miniature [which] we scaled exactly so that when it was in position, it fooled you completely and you thought you were looking at the whole structure. That door on the left is just beyond the soldier, while the rest of the hangar is about 50 yards away."

Bond's plan works perfectly and as he zips away, the hanger goes up in a massive explosion...
John Glen again - "We built a fairly large model of the hangar, about 6 feet by 10 feet, and staged a series of small explosions that grew larger with each blast.  There weren't any people in the foreground, so we could get away with filming it at fast speed—around 72-100 frames per second. This would slow the explosion down to get a more dramatic effect." 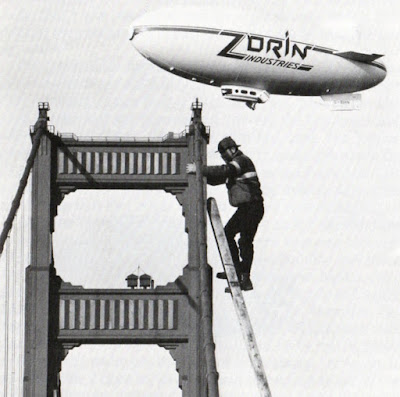 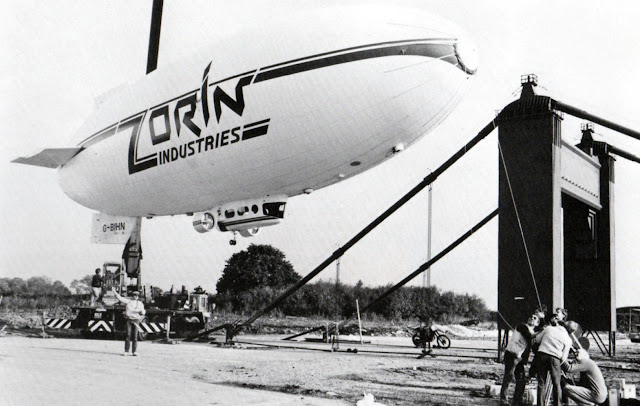 Richardson (shown up the ladder in the first photograph and holding the blimp tail cord in the second) said, in an interview in Cinefex 33; “There were three blimp models, ranging from ten to forty feet in length and all of them were operated by radio-controlled motors."

The Living Daylights (1987)
Directed by John Glen
During the action in Afghanistan, Bond steals a Russian cargo plane (actually an American-made C-130 Hercules) and takes off, just avoiding a smaller plane that is coming in to land.  Both of these were twelfth-scale models (as was the armoured car, which is seen in the same shot).

Later, in the same sequence, Bond lends some air support to his freedom-fighter colleagues who are racing across a bridge.  Richardson said, at the time, “There never was a bridge like the one you see in the film.  Lengthwise, it was the same as the one you see on screen, but height-wise it was at most fifteen or twenty feet above the river bed. Of course, that wouldn't look very spectacular when it s collapsing so we constructed a foreground miniature of the ravine and a different bridge. We used the existing bridge from the handrail down to the road level so that you could see vehicles driving along it, but everything beneath that was a miniature, approximately twenty feet across and four-and-a-half feet high.  It was shot twenty-three feet from the camera, whilst the real bridge was about a thousand feet away.”
Tomorrow Never Dies (1997)
Directed by Roger Spottiswoode 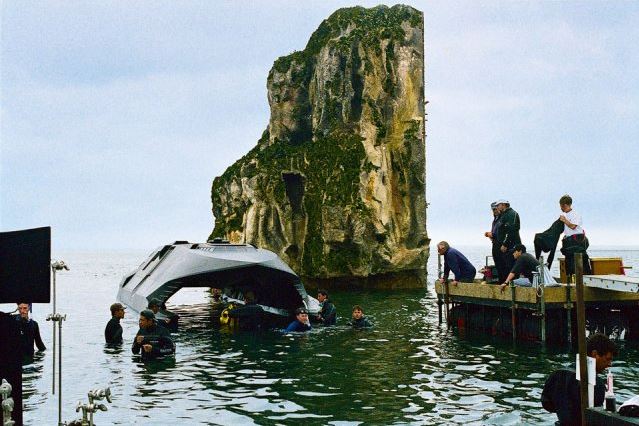 The Stealth boat, which was filmed in the Fox Baja tank (where James Cameron made "Titanic")

The World Is Not Enough (1999)
Directed by Michael Apted 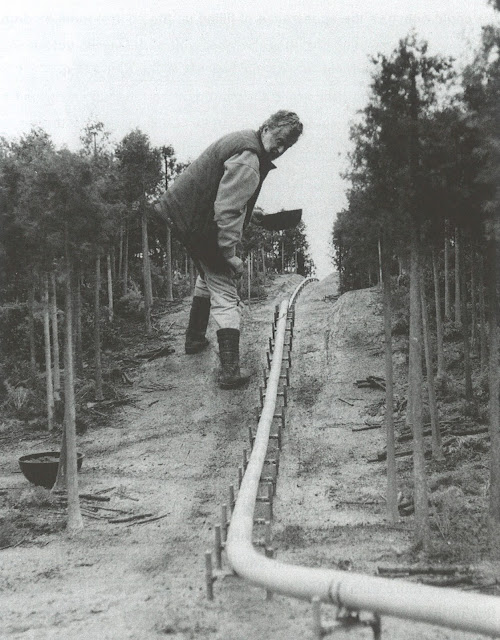 A key part of the plot involves the King pipeline and whilst the exterior was filmed in Cwm Dyli, Snowdonia, some sequences (including the explosion) were shot at Hankley Common in Surrey (where, much later, the Bond home would be built for "Skyfall").

Next time, it's Derek Meddings turn for the limelight once again...
Posted by Mark West at 09:00:00