Can One Man Survive? A guest blog by Simon Bestwick

Today I'm pleased to host my old friend Simon Bestwick, who's conducting a blog tour in support of his new novel "Hell's Ditch" (which I read in critique and can confirm is a cracking novel).  "Hell's Ditch", from Snowfall Books, is published tomorrow. 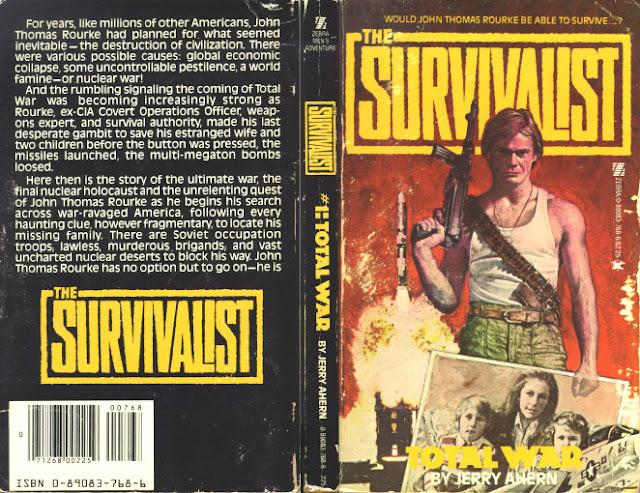 One of my guilty teenage reading pleasures back in the 1980s were novels in the so-called ‘Radioactive Rambo’ subgenre – set after a nuclear war, generally depicting straight-arrow, All-American heroes whupping the ass of the dastardly Commies.

The first and best of the crop, setting a standard that most of its imitators dismally failed to live up to, was Jerry Ahern’s The Survivalist series. In it, John Rourke, CIA-trained combat and survival expert and doctor, separated from his family by a nuclear conflict, sets off across to find them, usually with a cigarillo between his teeth and a Detonics .45 in each hand. (I’d never heard of this gun before, either – later I learned that Ahern bought the company that makes them!) As he goes, he fights off murderous brigands and invading Russians, and gets pulled into the fight between the remnants of the US Government and the Soviet forces. Along the way, Rourke falls in love with a Russian woman, Major Natalia Tiemerovna of the KGB, and she with him, but their relationship remains forever unconsummated as he also loves – and is faithful to – his wife, Sarah.

The Survivalist is pulpish, gritty and a lot more fun than it sounds. Ahern wrote good, solid prose and had a nice line in inventiveness and characterisation, happily ladling new complexities and characters into the mix to keep the brew fresh.

After Rourke finds his family, the series veers into science fiction with the Earth’s atmosphere catching fire as a result of the nuclear war. The Rourkes use cryogenic chambers to sleep away the intervening century and re-emerge into the slowly recovering world, only to find the old conflicts starting up again as survivors from the US and Iceland are menaced by Soviet forces, and by a neo-Nazi regime from Latin America. The one common factor, of course, is that Rourke always has a plan to overcome whatever gets thrown at him.

Also, Ahern, though a card-carrying NRA member and champion of the Second Amendment, managed some nuanced portrayals of the Russians, in contrast to the one-dimensional baddies of films like Red Dawn, or most other books of the ‘Radioactive Rambo’ stripe. In the first novel, Total War, both sides try and fail to prevent the conflict escalating into full-scale war; in the later books, the occupation troops are a mix of good and bad. In fact, one of the most decent and honourable characters in the series is Natalia’s uncle, General Varakov, commander of the Soviet Occupation Forces, a loyal Russian, professional soldier and convinced Communist who earns even his enemies’ respect.

‘To write a potboiler, that is genius,’ Baudelaire once said, and The Survivalist books might go some way to proving that point; while they aren’t Dostoievsky, they had a grip and vividness that means I still remember them, nearly thirty years on.

My new novel, set after a nuclear war, owes a fair debt to the ‘Radioactive Rambo’ school of fiction – and to The Survivalist, probably, most of all. Lord knows what Jerry Ahern would have made of it, or of having a godless left-winger like me for a fan – but I like to think the irony would have made him chuckle. 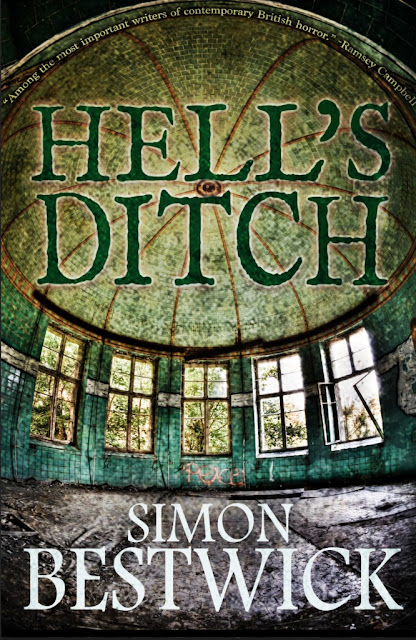 The dream never changes: a moonless, starless night without end. The road she walks is black, bordered with round, white pebbles or nubs of polished bone; she can’t tell which but they’re the only white in the darkness, marking her way through the night.

In dreams and nightmares, Helen walks the Black Road. It leads her back from the grave, back from madness, back towards the man who caused the deaths of her family: Tereus Winterborn, Regional Commander for the Reapers, who rule the ruins of a devastated Britain.

On her journey, she gathers her allies: her old mentor Darrow, the cocky young fighter Danny, emotionally-scarred intelligence officer Alannah and Gevaudan Shoal, last of the genetically-engineered Grendelwolves.

Winterborn will stop at nothing to become the Reapers’ Supreme Commander; more than anything he seeks the advantage that will help him achieve that goal. And in the experiments of the obsessed scientist Dr Mordake, he thinks he has found it.

To Winterborn, Project Tindalos is a means to ultimate power; to Mordake, it’s a means to roll back the devastation of the War and restore his beloved wife to the living. But neither Winterborn nor Mordake understand the true nature of the forces they are about to unleash. Forces that threaten to destroy everything that survived the War, unless Helen and her allies can find and stop Project Tindalos in time.

Find out more at the Snowbooks site

Simon Bestwick is the author of Tide Of Souls, The Faceless and . His short fiction has appeared in Black Static and Best Horror Of The Year, and been collected in A Hazy Shade Of Winter, Pictures Of The Dark, Let’s Drink To The Dead and The Condemned. His new novel, Hell’s Ditch, is out on 1st December.