The Making Of "Licence To Kill"

As regular readers of this blog might have realised by now, I am endlessly fascinated by the behind-the-scenes process of films and I enjoy reading good making-of books.  In my experience, the Bond films have a spotty track record - for every "Live & Let Die Diary" by Roger Moore, you have the Garth Pearce snooze-fests - but I've just finished this and thought it worth blogging about.


The Making Of Licence To Kill, by Sally Hibbin
"For the first time in 15 years the James Bond production company has allowed an author to work directly alongside the film units during the making of a Bond movie.”

Given free rein on the set, Sally Hibbin made the most of the situation and wrote a book that manages to capture the excitement, hard work, occasional boredom and fun that goes on during the planning and shooting of a film.  With profiles and interviews of all the key players - actors and the production team - Hibbin follows the process from start to finish, explaining what’s going on and how one event ties into another, detailing the triumphs - andd occasional disasters - whilst never losing sight of the huge logistical exercise that making a big film in Mexico and Florida, with up to three units working, actually is.  And whilst she does capture the fun - both in the interviews (Timothy Dalton and Robert Davi seem to have got on particularly well) and pictures - she doesn’t shy away from the awkward areas either.  With a budget similar to that of “Moonraker” (made ten years earlier), the production was forced to leave the Bond spiritual home of Pinewood and set up camp at the Churubusco Studios in Mexico - a complex that production designer Peter Lamont had to kit out from scratch - and this does cause problems that make life just that little bit harder.  The production team come across very well, well versed with each other since it was essentially the same group - from director John Glen through to writers Michael G. Wilson (also the producer, along with Cubby Broccoli) and Richard Maibaum, second unit director Arthur Wooster to cameraman Alec Mills, not to mention special effects supervisor John Richardson (who seemed to alternate his position with Derek Meddings) - that had worked together since “For Your Eyes Only” in 1981.

I’m a big fan of ‘making of’ books and I enjoyed the structure of this, plus it’s lavishly illustrated and nicely in-depth - though if I had one minor complaint, it’s that editor John Grover and the aforementioned Richardson only get about a page and half each covering their jobs, which seems light (though the latter does crop up several times throughout the piece).

I saw “Licence To Kill” (at a little cinema in Torquay) when it first came out in 1989 and I don’t remember being over-impressed - to me, then, it didn’t have the scope of the earlier films and, at the time, it was competing with bigger budgeted action films from the US (such as “Lethal Weapon”).  My appreciation of the film - the acting, the direction and the general tone - has improved as time’s gone on and reading this, my admiration for the film-makers has increased too.  A very thorough, well-written and entertaining book about a film that is still under-rated, I would highly recommend this. 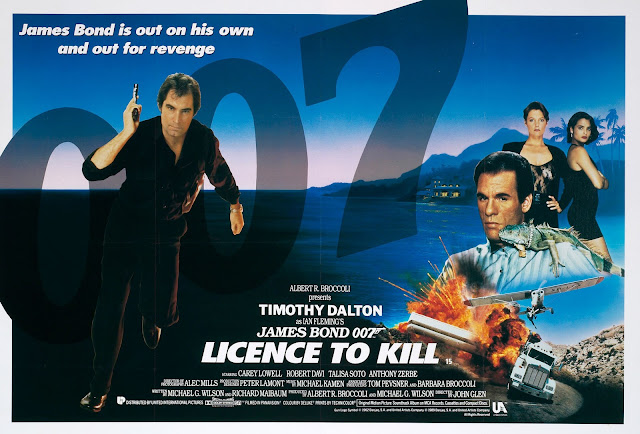 A brief retrospective of the film 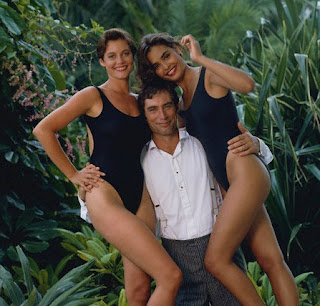 Filmed on a budget of $32m, it has so far made $156.1m worldwide and suffered with competition from several summer blockbusters, namely “Batman”, “Indiana Jones And The Last Crusade” and “Lethal Weapon 2”.  Since then, Bond films have been released in Autumn or Winter.

This proved to be the last James Bond film for six years, caused by a combination of the relatively poor box office performance and legal wranglings over the ownership of the character.  “Licence To Kill” also marked the last involvement in the series for director John Glen, screenwriter Richard Maibaum, title designer Maurice Binder, editor John Grover, director of photography Alec Mills, along with Timothy Dalton (Bond), Robert Brown (M) and Caroline Bliss (Miss Moneypenny).  It was also the last Bond film where producer Cubby Broccoli was an on-set presence, though he would act as a consulting producer for “Goldeneye” (1995) before his death.

This was the first EON productions Bond to get a “15” rating from the British Board of Film Clasification.  It was also the first not to take its title from an Ian Fleming novel or short story, though it does use plot elements from “Live & Let Die” - the feeding of Felix to a shark - and “The Hildebrand Rarity” - for the scene where Sanchez beats his mistress with a whip, in the short story it was Milton Krest who beat his wife with a similar implement.

There are also a couple of nice little in-jokes, the first being that throughout the series (and beyond this film), Q warns Bond about damaging or losing equipment but here, once he’s used his rake/radio, he throws it into the bushes and walks away.  This was, apparently, Llewellyn’s idea.  The second is during the final chase sequence, when Bond jumps onto the trailer and Sanchez shoots at him, the sound of the bullets ricocheting plays the start of the James Bond theme.