GodBomb!, by Kit Power (a review)

In a new edition of the occasional series, I want to tell you about a book that I've read and really enjoyed, which I think adds to the horror genre and that I think you'll enjoy if you're a fan. 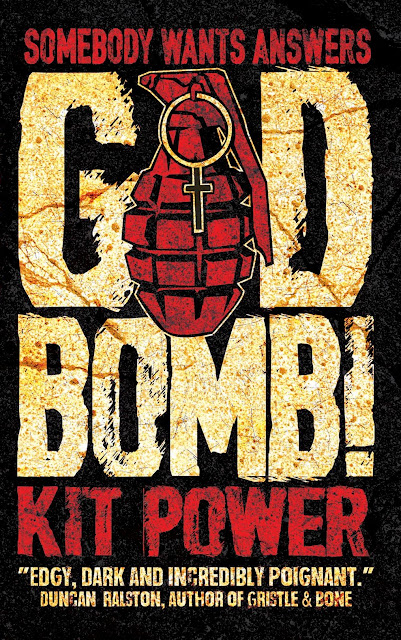 A born-again revival meeting in a public building, the usual mix of the faithful, the curious and the desperate.  And one other... an atheist suicide bomber.

And if God doesn't come and talk to him personally, he's going to kill everyone in the building...

A short, gripping, gut-punch of a novel, this opens fast and manages to keep its pace right through to the last few lines.  Told in present tense, it focuses on several members of the congregation (who all have cause to question God’s role in their lives) as well as the un-named bomber and weaves them together in a tense fashion, wringing every bit of drama out of the situation.

The characterisation is superbly handled - from an alcoholic called Twitch, to a heavily pregnant true-believer called Emma, from reformed junkie Mike to Katie, a teen who is trying to find her purpose.  Whilst we never discover everything about the bombers philosophy, his actions are confusing enough - vicious, yet tender - to ramp up the suspense as first a lone policeman arrives and then the building is surrounded, as Emma goes into labour.

With flashes of brutal violence that will make you wince to wonderful stream-of-consciousness sections that roll you along, this is an assured piece of writing with a well realised sense of location.  I liked it a lot, highly recommended.

(as a point of interest, I read this for critique which is why my blurb is on the back cover).

As I like to read story notes, I asked Kit where "GodBomb!" came from and this is what he had to say (cheers Kit).


The Genesis of Godbomb!, by Kit Power

As is often the case, GodBomb! came about when two ideas collided with each other. The first was a novel called Zeitgeist, which was written by Todd Wiggins and came out in the mid nineties. I only dimly remember the plot, but at a certain point, one of the characters storms into a church, and as the remaining characters drive away, there is an explosion and the building is destroyed. And I remember thinking ‘Wow - what must have it been like inside that building, in those small number of minutes? What must have gone through everyone’s heads?’

Then, in 1995, for reasons lost to obscurity, at the age of 19, I attended a real life Born Again revival meeting. As someone basically raised as a happy pagan/atheist, it was a profoundly odd experience, and one that I found stuck in my mind. Something I was unable to process properly. My thoughts kept returning to it, and eventually, I felt like I had to sit down and try and write about it.

As I mentioned, I was 19 then, and consequently only wrote the first chapter, before realising it would take more effort and focus that I was willing to give it. So the idea sunk, apparently without trace.

But it wasn’t done with me.

And when I reached a point in my writing when I decided it was time to try for My First Novel, the idea slunk out of the shadows of my subconscious, and stood and stared at me, cold, hard eyes glittering with anger and madness. I looked back, held its gaze, nodded, and started to write…


I’m glad to have this one out of my mind at last, and out in the world.

The novel is available as an ebook from Amazon UK, with a paperback edition forthcoming

Available from Amazon US here