Something that I’ve found myself doing over the years is critiquing friends work - I must be quite good at it, because Sue Moorcroft and Gary McMahon keep coming back - and I enjoy it a lot. I get to read new work in flux, sometimes my suggestions get taken up and I often get a nod in the acknowledgements (always nice).

On Monday, my Dad asked me for a favour. He’s spent the last couple of years - doing a few hours a week, when he could find the time (my Dad is the kind of bloke who, upon retiring, is now busier than he’s ever been) - transcribing and editing my Grampy’s diaries from his stint in the war.

I loved my Grampy, he was a wonderful man but like most people of his generation, he rarely talked of his wartime experiences (and certainly didn’t with me, though I do vaguely remember a story about him clonking a German on the head with the handle of a spade once). When he died in 1997, as my Dad and my uncle were sorting through his things, they found some exercise books filled with handwriting. Some fifty years after his experiences, Grampy had decided to write them down and as the years went by, Dad decided they should be saved. I think he was right.

The diaries are now all transcribed - some 21,000 words of wartime reminisces by a man who wasn’t even a father when he was drafted and was almost thirty years away from becoming a grandfather. Dad has asked me to read through them and critique them (he’s worried, I think, about repetition) and I’m thrilled to be doing it. I miss my Grampy (and have kept a diary myself since 1981), so the opportunity to discover parts of his life that I never knew whilst he was alive is a tremendous draw. I have made the resolution that, unless a sentence simply doesn’t work, I won’t change anything because I want to preserve his voice, as much as Dad has, because that’s the whole point.

I started work on it this morning and I’m already enthralled. I won’t be posting passages of it here because it’s not mine and I’m not sure what my Dad’s plans are for it, but I will share this. I think Grampy wrote this on the first page, as an explanation. I’ve called it the preface.

This narrative may seem disjointed as it is over fifty years since it happened and some names and places are now vague. I was never a hero but had several near misses including being machine-gunned by aircraft, losing two of my trucks, being hit in a snowstorm by an American armoured car and overturning in a forest.
I was always lucky and always felt detached from danger even though some of my duties seemed dicey.

This is one of my favourite photographs of Grampy and was taken in 1985 at the bungalow he & my Grandma shared. He’s explaining something to my kid sister Sarah, who would have been three, as my other sister, Tracy, looks on. 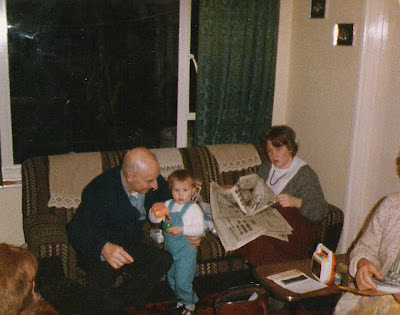