"Fog On The Old Coast Road"

Woo hoo, I’ve just had news of my second acceptance of the year (which will appear in a limited edition hardback from NewCon Press at Fantasycon), that I'm really chuffed about. Even better, I’ll be doing a reading of it which will be filmed by those good folk at Unbound, a Leicester based group run by Adele Wearing.

My story is called “Fog On The Old Coast Road” and follows the misadventures of Tom and his six-year-old son Jack, who are driving from Skegness to Boston, to pick up wife and Mum Clare. I was asked for a very spooky tale and I think I’ve delivered - there are some scary set-pieces and I had a lot of fun writing the piece.

The book will be tied in with an evening of readings (see the press release below) and there will be five of us all told - Paul Kane & Marie O’Regan, who I’ve known for years through the Terror Scribes; Ian Whates, who runs my writing group and Amanda Hemingway. Yes, that Amanda Hemingway. I’m both nervous and excited about meeting her, but it all adds to the fun. 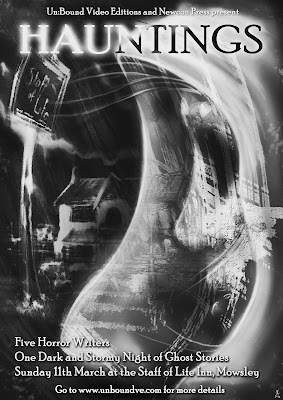 UBVE are working with NewCon Press on this one, with the live readings starting the evening and then later we will be recording the dramatic scenes for the episode and doing a round table interview with the authors about ghost stories and their lasting role in fiction.

After the event the readings will be posted on our YouTube channel while we turn the video footage into something awesome (you saw zombies right?) and then the episode will be released. Later in the year. NewCon will be publishing a limited edition hardcover of ghost stories, sharing the title “Hauntings” with our event and including the stories featured. The anthology will also be available as an ebook.